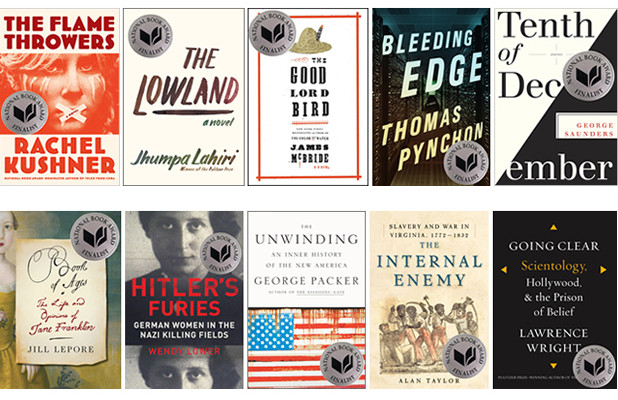 The 2013 National Book Award winners will be announced this Wednesday, November 20. Last year I put up a list of finalists with some predictions ... none of which proved correct. So this year I will skip the guessing and just provide a preview of the nominees along with some quick opinions of the ones I’ve read. Got a favorite, one you hate, or a book that should have made the list but didn’t? Say so in the comments.

Fiction
1. Tenth of December by George Saunders. Certainly one of the most hyped books of 2013, whether or not it’s one of the best. How one can pronounce the best book of the year on the third day of the year remains beyond me. But Saunders is at the height of his talent in this collection of short stories.

2. The Good Lord Bird by James McBride. The story of John Brown told from the perspective of a freed slave boy who everyone thinks is a girl. Sounds crazy, but it works so well. McBride, who was among the favorites I saw at this year’s National Book Festival, nails the voice. (Personally, I’m pulling for this book to win.)

3. The Lowland by Jhumpa Lahiri. Our reviewer found this one lacking. I’ve not gotten around to it myself yet but thought that Lahiri, while a very strong short story writer, struggled in her previous novel.

4. Bleeding Edge by Thomas Pynchon. Pynchon needs a National Book Award like a fish needs a bicycle ... would he even show up to collect it?

2. The Unwinding: An Inner History of the New America by George Packer. The New York Times reviewer says the book “is a painful book to read. It made me feel ill, as if I’d contracted a three-day flu.” But he also calls it a masterpiece.

3. Book of Ages: The Life and Opinions of Jane Franklin by Jill Lepore. A look at the life of Benjamin Franklin’s sister.

4. Going Clear: Scientology, Hollywood, and the Prison of Belief by Lawrence Wright. A fair yet damning take on Scientology. Not Tom Cruise’s top choice for a winner.

5. The Internal Enemy: Slavery and War in Virginia, 1772-1832 by Alan Taylor. The “internal enemy” are the slaves in this unique look at a portion of American history.

How problematic is the application of Big Data methods to literature? That is: is there a problem in taking huge swaths of literature and subjecting them to data mining techniques?