The Good Lord Bird: A Novel

John Brown's rebellion and downfall as seen through the eyes of a child freed by the famed abolitionist. 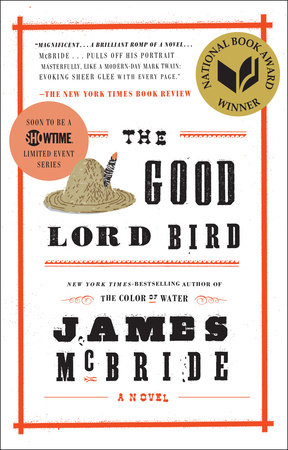 John Brown’s failed raid on Harpers Ferry was one of the defining moments that led to the Civil War. Brown himself is one of the more controversial figures in American history, given his use of violent means to pursue a noble end. In this fictional account of that key figure in the anti-slavery movement, author James McBride explores the beginning of abolitionism through the eyes of a young slave called Little Onion.

In The Good Lord Bird Little Onion is Henry Shackleford, stolen and “freed” by Brown after a bar brawl erupts between Brown and Henry’s master. Henry, whom Brown mistakes for a young girl, receives the nickname “Little Onion” after devouring Brown’s good-luck charm, and thus becomes the abolitionist’s good-luck charm himself. Brown, in turn, bestows upon Little Onion a feather of the Good Lord Bird, a woodpecker “so pretty that when a man sees it, he says, ‘Good Lord.’”

The Good Lord Bird recounts Little Onion’s adventures as he reluctantly accompanies Brown on his anti-slavery crusade: surviving in the wilderness, suffering through Brown’s lengthy sermons and crossing paths with key abolitionist leaders, including Frederick Douglass and Harriet Tubman. With humor and poignancy, McBride also tells of Little Onion’s coming of age — a difficult process for any young man, and one further complicated when disguised as a member of the opposite sex. Little Onion uses his female façade as a survival mechanism, avoiding carnage in Brown’s many battles with pro-slavery supporters. However, after being shamed by none other than Tubman herself, Little Onion is unable to resist being swept up in Brown’s preparations to “hive the colored” (enlist the support of local slaves and freedmen) and raid the armory at Harpers Ferry, with the hope that this will signal enslaved blacks to rebel against oppression. In McBride’s telling, Little Onion’s involvement in the auspicious raid ultimately seals Brown’s fate in a pivotal movement in American history.

Through the narrative of Little Onion, McBride succeeds in showing the humanity of one of the more notorious leaders of the anti-slavery movement. Although few dispute that Brown’s actions were a catalyst for the War Between the States, many still debate whether Brown was a martyr or a madman. In spite of the brutality witnessed at the massacre of Pottawatomie and the Battle of Osawatomie, Little Onion’s interactions with Brown portray a simple, spiritual man following a higher purpose. Little Onion declares, “Him being the person to lead the colored to freedom weren’t no lunacy. It was something he knowed true inside him.” Brown views slaves as “God’s people” and believes he is serving God’s purpose in his efforts to free them, even if those efforts are carried out by “purg[ing] America’s sin with blood.” In spite of his zealotry and violence, Brown is shown as a man who cares deeply for the people taken under his wing, whether they are white or black.

McBride also deftly introduces the possibility that for many slaves, freedom was a complex choice. Some of the slaves believe Brown “ain’t right in his mind” for viewing blacks and whites as equals. Little Onion comes to the realization that Brown erroneously “reckoned every colored wanted to fight for his freedom. It never occurred to him that they would feel any other way.” Little Onion himself often questions his decision to stay with Brown, living hand-to-mouth in the wilderness, when returning to his master would guarantee food and shelter. Of course, McBride makes no effort to glorify slavery, and instead The Good Lord Bird depicts the abuse and degradation of slaves at the hands of both whites and freed blacks.

The Good Lord Bird takes on a darker tone as Brown’s fate is foreshadowed by Little Onion’s timid and flawed actions. As the book draws to a close, Little Onion acknowledges, “I was but a coward, living a lie. When you thunk on it, it weren’t a bad lie. Being a Negro means showing your best face to the white man every day. You know his wants, his needs, and watch him proper. But he don’t know your wants. He don’t know your needs or feelings or what’s inside you, for you ain’t equal to him in no measure. You just a nigger to him. A thing: like a dog or a shovel or a horse.” It is in this context that Brown stands out in contrast to his fellow man. Like the Good Lord Bird, which fells old trees so that new trees may prosper, Brown’s toils to end slavery lead to a new beginning for Little Onion and, ultimately, all those once enslaved in America.

I recommend The Good Lord Bird to anyone looking to explore one of America’s most significant turning points through a novel that offers both entertainment and historical background. McBride skillfully uses wit and suspense to spin a compelling tale that also educates the reader about the early abolitionist movement and those it affected. Although many readers will know Brown’s fate before the book begins, the moving story of Little Onion and John Brown will draw readers in and have them hoping for a different outcome.

Jennifer Showell-Hartogs is an avid reader, world traveler, and a federal employee. She resides in Arlington, Va., with her husband, daughter and dog.

An interesting, uneven collection of tales from the French master.