Wilder: How Rewilding Is Transforming Conservation and Changing the World 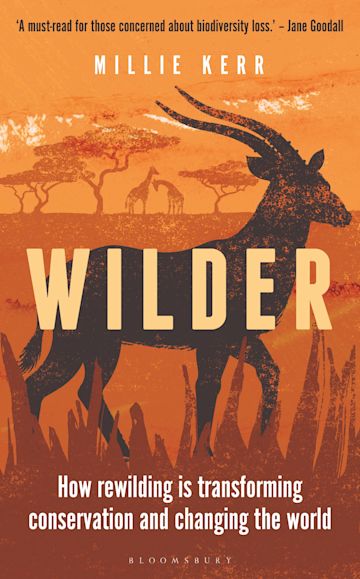 Rotund and moss colored, the world’s only flightless parrot seems an unlikely object of obsession. Yet hunter-turned-conservationist Richard Henry devoted decades to studying and protecting the imperiled New Zealand kākāpō, translocating over 700 birds by rowboat to a remote, predator-free island sanctuary in a pioneering early-20th-century attempt at biological restoration.

Henry braved stormy seas, sand flies, and scientists’ ridicule in his quest, only to fail when invasive weasels swam ashore and gobbled up every bird. In Wilder: How Rewilding Is Transforming Conservation and Changing the World, author Millie Kerr deftly turns this cautionary tale for ecological restorationists into a touchstone for the rest of us; with prescience and persistence, we, too, can help heal the earth.

A proponent of the conservation-optimism movement, Kerr left a lucrative career in corporate law for a more precarious role as a storyteller. In her new book, she aims to spotlight work that goes “a step further” than traditional wildlife conservation, which by her definition “seeks to maintain what is left and stave off further declines.” The result is a self-described “eclectic mix” of innovative projects around the globe in the burgeoning field known as rewilding.

Wilder, unfortunately, stumbles out of the gate. What is “rewilding”? Clearly enamored with the “boldness” of the concept, Kerr briefly traces its history in her introduction. Theorists in the 1990s agreed on a fundamental rewilding goal of restoring ecosystem functions, such as natural river flow via dam removal, or food-web relationships through return of apex predators. But after 30 years of practice and academic debate, more complexities and controversies have emerged around the term than a few pages can address.

Kerr soon dismisses “linguistic sticklers” for insisting on a clear and precise definition of rewilding. “I understood it implicitly,” she contends. “Rewilding involves restoring some measure of ‘wildness’ to places humans have altered and destroyed.” But readers are left wondering: What are the key components of a rewilding effort? Does the work differ significantly from ecological restoration? How can we measure the success of an endeavor we cannot define?

Concerns over fuzzy terminology fade somewhat amidst vivid portrayals of ambitious reintroduction projects and their visionary leaders. In Mozambique’s Gorongosa National Park, civil war devastated both forests and grasslands, wiping out black and white rhinos, African wild dogs, and 93 percent of wildlife biomass. When surviving park staff ventured back in 1994, their first order of business was landmine removal.

Helicopter surveys by a dedicated park warden confirmed the catastrophe but reassured him that “the ecosystem otherwise seemed intact.” In the park’s view, the key process to restore was predation, beginning with the reintroduction of major prey animals. Kerr recounts each daunting but fascinating step toward recovery, from securing funding from a tech billionaire to sourcing African buffalo and wildebeest to convincing local cattle owners that a project intended to culminate with leopard restoration will benefit them economically. With herbivore biomass now approaching pre-war levels, Gorongosa has become, says Kerr, “a model for rewilding projects in Mozambique and beyond.”

From Africa to Ecuador, New Zealand to the English countryside, the author conveys rich details about each initiative, despite pandemic lockdowns that limited her travel. Interviews with project leaders dramatize the often-grinding tasks of day-to-day field work and emphasize the surprising intensity of interventions — from electric fencing and air-dropped rat poison to veterinary care and captive-breeding operations — used to jumpstart “wildness.” The genetic analysis required to sort out which Galapagos tortoise species belong on which island is especially enlightening; high-tech tools, to many so-called “active” rewilders, are essential to reversing the ravages of land abuse.

Probably the most interventionist project profiled is in San Antonio. That’s also the most personal chapter, set in the Texas town where young Millie Kerr learned to love wildlife in her tangled back yard. Her family avoided downtown’s famous River Walk, a popular restaurant- and hotel-lined stretch along the San Antonio River which had been straightened and channelized in the 1920s. “I didn’t need or connect with the river,” Kerr explains, foreshadowing a growing nature disconnection that presaged her London-based legal career.

The same year that Kerr abandoned her office tower, 2008, San Antonio launched a river redesign. By re-curving banks, installing rock riffles, and digging pools, engineers revived hydrological and biological processes that welcomed back Guadalupe bass and mussels in the water and rare birds along the re-planted banks. Visiting early in the pandemic while researching the book, the author revels in the swallows overhead and in her own healing. “To rewild ourselves,” she asserts, “we need wild places.”

To Kerr, the San Antonio River’s eight-mile restoration exemplifies a broader potential for rewilding, beyond vast habitat cores like Africa’s Rift Valley, to “almost anywhere, on almost any scale.” But as Laura Martin notes in Wild by Design, a book that offers a more rigorous analysis of ecological restoration, the climate crisis has upended place-based restoration as species and ecological communities become ill-suited to living within their historic ranges.

Though Kerr extolls the “incredible potential” of rewilding in an era of climate change, none of the projects as depicted here is deliberately planned to thrive in a warmer, less stable world. Several, like the Gorongosa restoration, rely on historic ecological baselines to define success. Other books, such as Isabella Tree’s Wilding: Returning Nature to our Farm, depict rewilding efforts designed primarily to build flexibility and resilience, anticipating the unpredictability of coming decades and centuries. Perhaps the chief flaw in Kerr’s presentation is its apparently limited timeframe, which seems to confine rewilding to the reconstruction of lost natural idylls, even as biomes shift and erode around them.

Yet the processes set in place by the visionaries at work in Wilder may yet transform conservation. Those processes include inspiring the determination and prescience of environmental leaders. After all, pessimism never rescued a species from oblivion, as the team now stewarding the last 252 kākāpōs (in anticipation of their release) would attest. Perhaps the stories in Wilder, told with enthusiasm and heart, will be just the spark some rewilders need to carry on with their work or — more importantly — to begin it.

Julie Dunlap writes and teaches about wildlife ecology, environmental history, and climate change. Her new children’s book is I Begin with Spring: The Life and Seasons of Henry David Thoreau (Tilbury House, March 2022).