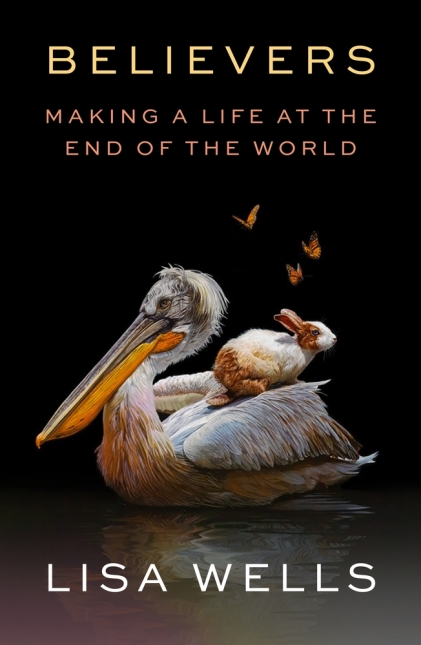 With Believers: Making a Life at the End of the World, poet and essayist Lisa Wells introduces us to an eclectic group of activists committed to fighting climate change. In this series of essays, she tells the stories of off-the-grid visionaries devoted to counteracting prevailing narratives of “the end of the world” through passionate, sometimes anarchical efforts to educate others about the Earth’s perilous straits.

One of Wells’ subjects, a mercurial trans woman named Finisia, articulates this perspective cleanly: “I sit at a threshold,” she says. We are, indeed, on the threshold of cataclysmic ecological change; Wells’ purpose here is to focus our gaze on what most of us leave relatively unexamined: a vision of how we might save life on earth from extinction.

The book opens with the author asking the question, “We are at the end of the world. How, then, shall we live?” This has been Wells’ central concern ever since she dropped out of high school with three friends in the 1990s to attend a wilderness-survival school in the backwoods of Washington State. One of those friends, Peter, remained a part of the radical environmental scene and knew a number of people living off the grid in the Pacific Northwest. He provided Wells entrée into their world.

From Finisia, an “itinerant outlaw” who, with her group of “Prairie Faeries,” once roamed the West in order to “terrarize” the earth by sowing and replanting, to spiritual/environmental intentional communities in New Mexico and Philadelphia, to trackers and botanists and survivors of California’s wildfires, Wells shows us the faces of an evolving movement dedicated to saving the planet from the ravages of human exploitation. Their stories are often heart-wrenching, with personal tragedies fueling their desire to create environmental change.

As foreshadowed by the title, there is a spiritual element braided into this book that may interest some readers and put off others. Many of the activists featured in Believers desire to “rewild” Christianity away from its present iterations and back to its “subversive, earth-honoring, empire-resisting, hope-engendering” roots. Interpretations of Christianity vary; some of Wells’ characters (Finisia, most notably) have crafted their own brand of Christianity, subsequently developing groups of cultish followers and thriving on their worship.

At the end of Wells’ journey, we find her again asking, “How, then, shall we live?” and then surprising us by rendering the question moot. Instead, she informs us, the real question is, “How should we live, knowing we are going to die?” What are we willing to sacrifice now so that we are remembered after we’re gone? And why should we work toward a better world that we, ourselves, will not live to experience?

These issues should trouble anyone with a conscience. And solving them, says Wells, requires us not only to choose to make the world more sustainable, but to make the creation of a better world for our descendants a mandate. The afterword finds Wells coping with the covid-19 lockdown while eight months pregnant and summoning even more pathos around the issue of what we’re doing to the planet we are bequeathing to the generations that will follow us.

Of course, even most people who care deeply about the environment can’t really imagine divorcing themselves from the power grid or making other drastic lifestyle modifications. These people will sense Wells’ disdain. To her, feckless do-gooders are like climate-change Muggles: semi-blind, ignorant by choice, impossible to teach. But the truth hurts, and real change often happens only after a struggle. Maybe we need the kind of jolt that Believers gives us if we’re ever going to become, finally, active caretakers of our planet.

Andrée Rose Catalfamo is a writer and English professor. Her work has appeared in Welcome to Baltimore, Hon!, Under the Gum Tree, Yellow Arrow Journal, Passager, and more. She is currently working on a memoir. She lives happily with her husband, Burt, and Bella, their maniacal Jack Russell terrier, in Binghamton, NY.