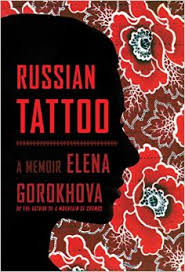 Russian Tattoo, the sequel to A Mountain of Crumbs, Elena Gorokhova’s well-received book of her life as a teenager in tumultuous Cold War Russia, is a wonderful and entertaining work capable of standing on its own.

I must confess, I’m not a fan of memoirs. More often than not, I find them puffed-up works serving to glorify the reputation and increase the stature of the writer. Even worse, some memoirists hold the reader at arm’s length and simply paint a pretty picture.

But Gorokhova gives us her soul as she shares her journey as a new immigrant from Russia to the United States, and into the arms and life of an American husband she barely knows. That is a long way to go to get away from your mother.

Yes, she leaves a widowed mother and an older sister behind in Leningrad, now Saint Petersburg. Gorokhova’s mother encourages her to be independent and fearless. Precisely because of this, Gorokhova is able to travel across the globe and begin what eventually becomes a fulfilled and happy life. Also because of this, she feels compelled to reject her mother — as much as she dares — both emotionally and physically.

This may sound inexplicable, but it makes an odd kind of sense. I learned from personal experience that when you bring up a child this way, as adults, they become self-reliant. If a flicker of emotional need arises in either you or your grown child, the child will double her efforts to push away. So, although I felt sorry for Gorokhova’s mother, I understood her daughter’s ingrained desire to distance herself from day-to-day interactions.

Gorokhova suffers a massive amount of culture shock when she settles with her husband, Robert, in Texas. She has no idea how to go shopping or what to buy. She recalls standing in line in Russia for every sort of food item and product, sometimes not even knowing what you are lining up for.

In Texas, Gorokhova is frightened and overwhelmed by every trip to the supermarket, where grocery items are so plentiful and different, she barely recognizes them. When she does buy something, she doesn’t know how to cook it. Gorokhova finds herself isolated in every way.

Robert leaves her alone to excess, expecting her to assimilate into this new life and new world with little or no help from him. She discovers her husband is more of a stranger to her now, in these surroundings, than he was when they met and briefly courted in Leningrad.

Gorokhova humorously recounts her first jobs in America, particularly waiting tables at Beefsteak Charlie’s. When a patron orders a screwdriver, she is confounded. She knows what you do with a screwdriver, and you certainly don’t drink it. Upon hearing every “new” order, she rushes to the bar and pronounces it the bartender, who is as patient in explaining and teaching her. She learns about White Russians and wonders, “What is a Black Russian, for heaven’s sake?”

Gorokhova’s story is a reminder of how traumatic an immigrant’s life is ― made easier, I’m sure, if you’re accompanied on the journey by other family members, and immeasurably harder if you aren’t. When she remarries and becomes pregnant, her mother does travel from Russia to be with her and, as Gorokhova puts it, “never leaves.” Her older sister, Marina, soon follows.

Even though she has often missed her mother, when they reunite in America, Gorokhova still can’t bring herself to give her the love and attention she knows would make her happy.

After she loses her mama, Gorokhova whispers over her body, “Forgive me, Mamochka, if you can.”

She goes on to describe this as a “last pathetic plea” and continues: “As soon as the words leave my mouth, my request invalidates itself because I know that, of course, my mother can…that despite her strict façade and Russian toughness, she always forgave me everything.” She’s right, because this is what mothers do. But wouldn’t it be nice if they didn’t have to?

Gorokhova is not famous, but she succeeds where other memoirists have failed by letting us know she’s not perfect. She does treat her mother badly. She does push her daughter. She recognizes these faults but is unwilling to explore them and change, at least not in time for her wonderful mother to see.

Could Elena Gorokhova be planning a third book sharing her (hopefully improved) relationship with her daughter, Sasha? I would read it.

Kathy Adams is a realtor in historic Gettysburg, PA, whose passion is writing. She is also a blogger, a contributing member of the Gettysburg Writer’s Brigade, a highly ranked Amazon reviewer, antique dealer, photographer, and small-business owner.

The Age of Acrimony