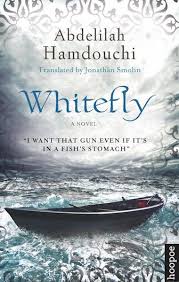 Detective Laafrit is trying to quit. Will sucking lozenges keep him from smoking while he searches for the murderer of four Moroccans washed ashore near Tangier’s coastline? The case takes on international proportions as ties between the murdered men and intrigues in Spain emerge.

Whitefly opens with youth protesting illegally for jobs, a parallel to Laafrit’s activist youth. He must defuse the situation to save the students from the retribution of the Moroccan police force, famed for torturing their captured.

In his early days, Laafrit met his wife as they both campaigned for human rights. Later, police tortured her for that activism. Laafrit promised her that by joining the police force he hadn’t sold out their ideals. “[He] was still an activist at heart and was bent on applying the law.” We find out this connection to his activist youth so far into the book, though, that it’s easy to miss.

The case of the four murdered Moroccans is perhaps too lighthearted and a bit cliché. It’s a good-guy-bad-guy tale with comic sidekicks such as Abdellah, who’s only half present.

“Abdellah coughed a number of times, as if he were hesitating before doing something. Then he started humming, pretending that he was trying to hum just to himself, but the refrain “there is no God but God” filled his voice with such religious fervor it soon slipped through his lips audibly. But really, he was testing if Laafrit was in as deep a sleep as he appeared to be.”

The real gem of the novel is the dialogue author Abdelilah Hamdouchi creates between Morocco and the phantom draw of immigration to Spain.

The washed-up bodies at first appear to be Moroccan illegal immigrants smuggled to Spain then tricked and tossed overboard. Laafrit’s police cooperation with his Spanish counterparts on the case, though, exposes serious, darker dilemmas about immigration, ethnic tensions, and false opportunities.

Hamdouchi compares the lush land and extended family connections the immigrants leave in Morocco with an isolated and racially tense existence in a “trash dump” of an alien Spanish city. The incompetent Spanish detective stumbles with the evidence needed from his side of the case, a contradiction of the stereotype of the notorious incompetence of Moroccan police.

As the plot develops, multinational companies become the new colonial-style powers that usurp Morocco’s valuable trade. “‘We’re in the age of globalization and the new world order,’ said Luis [Laafrit’s Moroccan-born Spanish counterpart], smiling in agreement and tapping his fingers on the table. ‘The globe isn’t under the control of states or governments any more. Multinational companies rule the world now and soon they’ll give way to lobbies and even criminal syndicates.’”

Whitefly draws us into the mindset of someone trying to stand up for human rights and the rule of law under a system that’s fighting against him. Is it enough for one man, Laafrit, to follow the law and refuse bribes? The culture of the police around him, residual paternalism, racism beyond the borders, and the appeal for Moroccans to immigrate to Spain all become challenges to renewing the Moroccan police force, and all influence the murder case.

The chase for the murderer, the humor: both will drive you to the end in a comic dash. Perhaps, though, the book’s aftertaste will also leave you thinking about Morocco’s dance with Spain, the allure of which may be only a mirage.

AA Bastian is a freelance writer in Silver Spring, Maryland. Her master’s degree is in International Law and World Order from the University of Reading in England. She holds a minor in Arabic and has lived briefly in Egypt and Palestine. She published an article about Egyptian women’s usage of social media during the Arab Spring, “Double Facebook Profile: Egyptian Women Online” at the Eurasia Review. She received an Honorable Mention in the Writer’s Digest 75th Annual Writing Competition in the Memoirs/Personal Essay category for “Japanese Carp,” a critical look at her childhood as a military dependent in Okinawa.