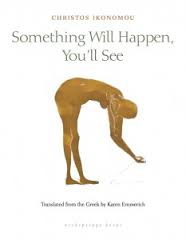 “The truth of a story lies not in its adherence to the facts but in its moral character.” It’s my favorite sentence in Christos Ikonomou’s most recent collection of short fiction, Something Will Happen, You’ll See, because it gets at the heart of what fiction can be: representative of reality but more emotionally powerful.

The 16 short stories in this collection — which was originally published by Polis in 2010 and won the Best Short-Story Collection State Award in Greece — focus on the impact of the Greek debt crisis on people’s lives, not the economic factors causing it. The stories are set in various neighborhoods around a port city southwest of Athens in the grip of depression and austerity triggered by Greece’s financial collapse in 2010. They portray the plight of young, old, unemployed, and tenuously employed.

The stories are unremittingly depressing. A reader expecting a climactic change and a resolution that offers hope will be disappointed. Despite the volume’s title, nothing changes for Ikonomou’s characters. They live every day with less hope than the day before. There is no climax, no note of comfort at the end.

In the title story, Niki and Aris, a young couple trying to cope with the possibility of financial ruin, are being harassed by debt collectors and are close to losing their house. Aris, overwhelmed by the situation, seems to be sleepwalking through the turmoil and is of little comfort to his wife. We see them as the discarded, like “a bicycle with no wheels, a three-legged chair…” Nothing will change, Niki thinks, because people are prone to compromise. The futility she feels reverberates throughout the volume.

The characters are isolated and disillusioned. For many, like the retired men waiting outdoors through a freezing night to be at the head of the line to see a doctor, the financial crisis is the final burden. “They all carried years of hard work on their backs. They carried deprivations and dreams that hadn’t come true. They carried the weight of the time they spent with their wives and children. They carried compromises they had accepted, vows they had broken. They carried betrayals they had committed and others that had been committed against them.”

The tipping point in these stories is financial, but life’s vagaries add complications that amplify the economic insecurity. A couple is left homeless by dint of eminent domain. In an ironic piece of bad luck, a man and his wife in danger of losing their home agree to live in his rich sister-in-law’s house while she travels, but it burns down. A man whose sister has been raped stays up all night guarding his family, but neighbors see him as a threat and shun him. A young woman is robbed and deserted by her boyfriend.

The saving grace, and what kept me reading, is Ikonomou’s ability to create haunting portraits of people I continued to think about long after finishing a story. It was painful to follow a day in the life of a man who can’t feed his child. I felt the anguish of a father to whom suicide appears the only way to hide the disgrace of his unemployed son’s thievery. I cringed for a slightly crazed champion of the poor repeatedly beat up by police at demonstrations.

The main character in “Placard and Broomstick,” Yiannis, is perhaps the most memorable of the collection. Yiannis constructs a makeshift placard to protest the accidental electrocution of his friend at an unsafe construction site. He can’t find the words to put on the sign, so he takes it, blank, to mark where the accident occurred. The flimsy sign falls apart in the rain, but Yiannis continues to stand there, holding it in silent testament to his friend.

The glimmer of hope that Yiannis’ solitary determination to make a statement, wordless though it is, will make a difference is short-lived, and the story concludes on a minor chord; “neither gods nor people who believed in gods” noticed.

Ikonomou makes you look where you would rather not — at the dispirited and desperate, the poor and the mentally unstable, the lonely and the forgotten — but through the power of his writing, you cannot look away. There is a moral imperative to these stories that extends beyond the headlines of the financial crisis and makes its pain palpable. One does not need to know all the facts and figures to feel the effects.

Chaos of the Senses

A diaphanous Algerian tale as lush and evocative as a poem.