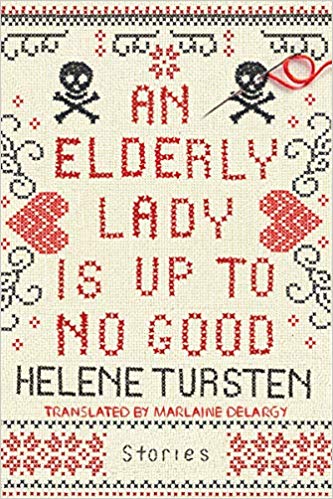 Don’t mess with Maud. If you rankle her, you’re likely to end up dead. That’s what happens to several of the unsuspecting characters in the quirky quintet of tales in Helene Tursten’s linked collection of short stories, An Elderly Lady Is Up to No Good.

Maud is an 88-year-old retired teacher of French and English who lives alone in an apartment in Gothenburg, Sweden. And that’s where her problems start.

Maud’s living arrangements are “rather unusual.” After her father died when she was 18, the apartment was sold, but an agreement was made through an attorney that she, her mentally ill sister, Charlotte, and their mother could continue to live in it rent-free “for as long as any member of the family wishe[d] to reside” there. After her mother and sister died, Maud was intent on holding onto the apartment for dear life. Her own.

In the first jaw-dropping, head-spinning story, “An Elderly Lady Has Accommodation Problems,” Maud suspects another tenant in the building, Jasmin Schimmerhof, of having ulterior motives for her sudden kindness. When Maud returns from one of her many trips abroad, Jasmin, an artist, rings Maud’s doorbell and arrives bearing gifts, a “really expensive Champagne de Pompadour” and “Russian caviar [that] was also the real deal.”

Maud instantly realizes that she has made three mistakes: answering the bell, letting Jasmin in, and allowing her to float through the flat as though she owned it. A few days later, Jasmin brings pastries and coffee, bounds into the kitchen, and makes herself at home. That’s when Maud’s ire rises. She decides that she has a problem that needs a solution.

Jasmin’s apartment on the ground floor has a glassed-in terrace which also serves as her art studio. When Maud visits to try to understand Jasmin’s motive for befriending her, she discovers collages of “pressed photographs, scraps of fabric, sheet music, tampons (Maud couldn’t quite see whether or not they were used), fragments of bone and all kinds of unidentifiable trash.”

There is another, more significant series of large objects with the titles PHALLUS I, PHALLUS II, PHALLUS III, “presumably ad infinitum.” These represent Jasmin’s despising of “sovereignty and the patriarchy.”

Maud files her observations away and begins to plan a solution to what she considers an “intrusion into her calm, peaceful world.” She plays the “old lady who was slightly confused” card, pretending to be hard of hearing and to have mobility issues, until her murderous machinations result in the first “no good” of the collection.

One of the threads that ties the narratives together is the backstories author Tursten creates for Maud. She loves to travel and has been “virtually all over the world.” So it is not unusual when, in the second story, “An Elderly Lady on Her Travels,” she finds reason to continue her penchant for murder.

After Maud discovers that a former fiancé is about to marry, she seeks out him and his betrothed at the spa where they are to tie the knot. It’s a destination wedding for the now-70-year-old Gustaf Adelsiöö and his porn-star intended, Zazza Henrix, who turns out to have been one of Maud’s students. As often happens when Maud is around, a creative killing ensues.

By the time “An Elderly Lady Seeks Peace at Christmastime,” the reader has become very familiar with Maud’s motives. The reader is also well-informed about the bitterness that haunts her life because of the necessity to take care of her sister. Until she doesn’t anymore.

Charlotte dies in a suspicious fall down “the long, steep stone staircase” in the apartment building, a staircase that features in Maud’s next problem and solution — the “famous attorney and his wife” who live directly above her and are very noisy. She has to find a way to end the “Thump-thump-thud” disturbing her solitude. She justifies the ends (and the means) by believing that, this time, she is also solving someone else’s problems.

The fourth narrative, “The Antique Dealer’s Death,” is a way to segue into the closing story, “An Elderly Lady Is Faced with a Difficult Dilemma.” It is also the only story not told from Maud’s point of view. This one is from the perspective of another resident of the building, a journalist working on a novel. It backtracks to much of the expository information that the reader already knows about the circumstances of Maud’s life.

When the titular antique dealer winds up dead in Maud’s father’s “gentleman’s room,” a “time capsule [of] thick rugs, four generous brown leather easy chairs” and the lingering odor of smoking, Detective Inspectors Irene Nuss and Embla Nystrom (from other Tursten novels) are called in to solve what resembles a locked-room mystery.

The solution comes in the final story in the collection. Here, back to Maud’s perspective, Tursten outlines the very carefully constructed crime. Though the investigative team eventually shelves the case, it is quite clear to the reader how the elderly lady restored her peace and quiet.

The five delightfully daffy stories in An Elderly Lady Is Up to No Good provide a succinct treatise on how to get away with murder. This is a terrific little dollop of crime. Just beware of the little old lady who lives upstairs.

Robert Allen Papinchak, a former university English professor, has reviewed a range of fiction in newspapers, magazines, and journals including the New York Times Book Review, the Washington Post, the Chicago Tribune, the Los Angeles Review of Books, the Seattle Times, USA Today, People, the Writer, Publishers Weekly, Kirkus Reviews, the National Book Review, the New York Journal of Books, World Literature Today, the Strand Magazine, Mystery Scene, Suspense Magazine, and others. He has been a judge for Publishers Weekly’s BookLife Creative Writing Contest and the Nelson Algren Literary Prize for the Short Story. His own fiction has been nominated for the Pushcart Prize and received a STORY award. He is the author of Sherwood Anderson: A Study of the Short Fiction.