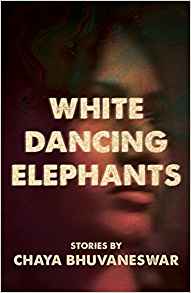 Chaya Bhuvaneswar’s debut collection, White Dancing Elephants, makes up a mosaic of snarled lives. Within each story, race, identity, gender, religion, and class rage like a storm, tangle like strands of neglected thread, and, at times, hum in the same enchanting and dissonant harmony.

The collection, winner of the Dzanc Short Story Collection Prize, is now nominated for the 2019 PEN/Robert W. Bingham Prize for Debut Fiction. It’s easy to see why.

Bhuvaneswar has the mastery of Jhumpa Lahiri and the lyricism of Sandra Cisneros. But the collection also has the bits of quiet joy and mischief reminiscent of Isaac Babel, along with an ability to embrace silent absence, as in Peter Orner’s fiction.

The stories in White Dancing Elephants display a wide range across such disparate elements as word count, time period, and genre. Characters include an Indian slave from 1545; a young artist with schizophrenia; a doctor in New England; a man who becomes a literary darling but is a terrible parent; an entire poisoned village; and much more.

The stories sometimes feel as if they’re working as a form of deconstruction, taking the notion of colonialism and smashing it. Other times, they read like protest art, training our eyes on both the perfect and the disturbing. Many are tales of Indian-American immigrants; clothing, words, food, and social norms swirl amid the profound complexity of the immigrant experience. Storylines flit back and forth between places, showing how characters thousands of miles away can have a huge impact through absence alone.

My favorites included “Newberry,” about a young hacker who steals in order to drive her undocumented lover to the border; “The Shaker Chair,” about an African-American psychologist whose strange enchantment with a young client goes terribly wrong; and “Adristakama,” in which a lesbian Indian American finds herself caught between a traditional life and her desires.

“Orange Popsicles,” however, is the one that refuses to let the reader look away. This is the story of Jayanti, who, while being investigated for cheating on a biology exam, is gang-raped by three white, male classmates in her dorm room. It somehow balances the complicated realities of #MeToo and sexual assault. Jayanti sometimes feels resilient, sometimes victimized. Other times, she is the pawn played by everyone else, struck down for wanting something better.

Many of the stories in White Dancing Elephants are told from women’s perspectives — diverse, occasionally less-than-virtuous points of view that illuminate time and space. Here, friendships are depicted with the same subtlety and understanding as familial or romantic bonds.

The relationships Bhuvaneswar’s characters have with men are wonderfully juicy, too: dads of disabled children, crappy boyfriends, and brothers wishing their sisters to return are just a few. All the people in these pages have a strange, haunting quality that binds the stories into a cohesive collection.

Nevertheless, Bhuvaneswar’s one cruel tick is fat-shaming: She never lets large women exist with any dimension. If overweight, they are portrayed as husband stealers, vapid extras, or bystanders to drive the plot forward.

As a fat woman myself, I have learned to forgive statements about the value of bodies. It’s so common that if I got upset about it every time it happened, I wouldn’t get much done in a day. Is Bhuvaneswar’s narrative choice a remnant of cultures still in the midst of overthrowing the old and toxic notion that women are objects? No matter where it comes from, it pulled me out of otherwise exceptional examples of how wide-ranging, beautiful, and revolutionary the short story can be.

Still, this debut is sure to lead to more great writing from Chaya Bhuvaneswar. Step aside, Hemingway. These white elephants dance.

Gretchen Lida is an essayist and an equestrian. Her work has appeared in the Washington Post, Brevity, the Rumpus, the Los Angeles Review of Books, and many other publications. She is also a contributing writer to Book Riot and the Washington Independent Review of Books. She teaches composition in Illinois, lives in Chicago, sometimes resides on Nantucket Island, and is still a Colorado native. Find her on Twitter at @GC_Lida.