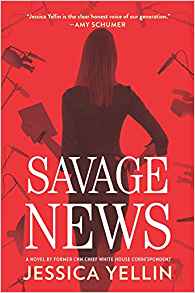 Jessica Yellin’s debut novel, Savage News, takes place in a strangely glossy Washington, DC, similar to the one we saw on “The West Wing.” Like the TV show, the book hints at the problems of today, but without the angry bite of terror that is our current reality.

Instead of Martin Sheen, the president in Savage News is a former governor of Colorado, an educated and thoughtful oil tycoon. His wife is a former Miss Venezuela with an engineering degree — a character detail that makes her feel like a cross between Michelle Obama and Melania Trump.

Savage News tells the story of Natalie Savage, a young, attractive TV reporter caught between ethics and good ratings when she’s given a chance of a lifetime to work as a temporary White House correspondent. The plot centers around Natalie desperately trying to please her network (whose standards are The Devil Wears Prada outrageous) while tracking down the first lady, who has gone missing.

The strength of the story is that it provides a kind of ethical escapism worth indulging in. The other asset is the way it balances this escapism with an honest depiction of the minefields, double standards, and sexual violence that women who want to get ahead in the nation's capital sometimes face.

As a woman in front of the camera, Natalie is under constant physical scrutiny. She has to show more chest and get better hair; she is always in jeopardy of being replaced by someone hotter and younger. She is defined by ratings and hits on social media, and she faces a rather nasty buffet of sexual harassment day in and day out.

Underneath it all, though, she is a woman who wants to be a good journalist, someone who aches to find the best story and who is still more interested in truth than clicks and “likes.”

Author Yellin, too, has been on camera for CNN, MSNBC, and ABC News. She is on the board for the Center for Public Integrity, and her byline has appeared in the New York Times and many other publications. She is extremely well connected; her book launch was covered in the Washington Post’s Style section.

Her knowledge of the industry and her résumé are impressive and lend credence to the absurdity of the newsrooms Natalie walks into — a reality we might have missed had the book been written by someone with less firsthand knowledge. It was fun to guess which details were fact and which were fiction.

While the novel’s hard-hitting honesty about women in the newsroom was admirable, the old saying that good politics does not equal good writing rings true here, and that’s the downfall of Savage News. The prose frequently feels lazy and jumbled. It’s hard to keep up with the plot because it relies too heavily on dialogue from its small city of forgettable characters.

Examples of this include James, Matt, and Ryan. Matt is on Natalie’s production team, Ryan is her nemesis, and James is her love interest. The three men feel so flat, however, that they could easily stand in for each other, making it impossible to care about any one of them.

The story is narrated from three points of view: Natalie’s, First Lady Anita Crusoe’s, and that of a set of headlines presented as tiny news briefs (like something from the Skim). This structure comes off as gimmicky and self-indulgent, a joke the reader isn’t in on.

The book also oozes with jargon, name-dropping, and texts. These artifices work to make the reader hyper-aware of how overly stimulating it is to be in the news business, but it often felt distracting and cheap. What would have happened if Yellin had set down her phone and focused on making Natalie unique; if she had shown deeper care for her sentences and made them just a little more beautiful?

I’d like to see Yellin write a second novel, this time about first ladies. Out of all her characters, it is Anita who sparkles. She is motivated by ambition and a desire to help her struggling home country, and her marriage is as complicated as the U.S.’ relationship with the small but turbulent South American country she represents.

Gretchen Lida is an essayist and an equestrian. Her work has appeared in the Washington Post, the Rumpus, the Los Angeles Review of Books, and many others. She is also a contributing writer to Book Riot and the Washington Independent Review of Books and is working on her first book. She teaches composition in Illinois, lives in Chicago, sometimes resides on Nantucket Island, and is still a Colorado native. Find her on Twitter at @GC_Lida.