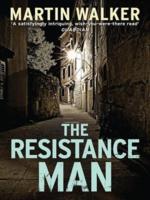 A World War II veteran dies in bed clutching a banknote from an unsolved train robbery organized by the French Resistance. A gay British antiques dealer is brutally murdered at his holiday rental. And the French manor house of a retired British spy is burgled. In his latest adventure, Bruno Courrèges, the chief of police of fictional St. Denis, discovers the connecting strands between these seemingly unrelated events.

The Resistance Man is the sixth and most suspenseful yet in Martin Walker’s Bruno mystery series, whose many readers admire the character’s culinary skills as much as his crime-solving abilities. Bruno is a former soldier who has settled down in the small village of St. Denis in the Périgord region of southwestern France. He has built a home with enough bedrooms for future children, without a wife to settle down with him. The two strong-willed women he has brought home to share meals cooked with his own lamb and vegetables fresh from his garden have independent career plans. Bruno also serves sumptuous meals paired with Bergerac wines to his many friends in the village, who are recurring characters in the mysteries.

There are families in St. Denis who still aren’t speaking to each other based on whether they sided with the Resistance or the Collaborators during the war. Bruno, as chief of police, takes charge of organizing the Resistance funeral, with a guard of honor and a flag for the coffin, for the deceased veteran we meet in the opening chapter. Some of the veteran’s relatives share the Resistance hero’s bitterness at not benefiting from a legendary train robbery at the end of the war, when about $750 million disappeared on its way to Germany. The French government of the time allowed Resistance fighters to take the money to both keep it from the Nazis and help the Resistance cause, but a few Resistance leaders became wealthy landowners overnight.

Then, even Bruno, who served in Bosnia, is shocked at the brutality of the antiques dealer’s murder. Fabiola, the doctor called to the murder scene and also a friend and dinner companion of Bruno, suggests that an iron bar may have been used to shatter the victim’s jaw, teeth, and skull. His empty van should have been full of British merchandise to sell in France, but robbery doesn’t seem to be a sufficient motive for such a savage killing.

At the same time comes a string of burglaries at isolated houses owned by foreigners. Ordinarily, the gendarmes employed by the Ministry of Defense would be responsible for solving these crimes, but they seek Bruno’s help because of his local knowledge of the area and of the victims. The most recent burglary occurs at the home of Jack Crimson, a retired British civil servant who plays tennis with Bruno. The French Ministry of the Interior also takes an interest in helping Bruno solve the case when it turns out Crimson is a former spy with contacts in the upper echelons of the British government. To avoid embarrassment, French government officials very much want the antiques and rare wines stolen from Crimson’s home returned.

Amid all this tension and mystery, Bruno faces difficult personal choices. Although he is attached to the slow pace of village life, and is not interested in opportunities for career advancement that would take him to Paris, he is unable to avoid Parisian politics entirely. A close friend of the St. Denis mayor is writing a book about Franco-American relations during the Cold War. Her research leads her to Marshall Plan involvement in helping the Resistance movement leaders who were opposed to communists. Marshall Plan slush funds may have been spent in tandem with the Neuvic train slush funds. Bruno’s investigations into the local crimes have repercussions at the Ministry of the Interior and affect the upcoming elections.

Walker, a former Moscow bureau chief for the London Guardian newspaper, cleverly keeps the reader interested in the history of the French Resistance while spinning a complicated connection between three seemingly unrelated crimes.

Fans of the previous five Bruno mysteries will be happy to continue their acquaintance with the friendly chief of police of St. Denis, where the wine flows and friends dine on local delicacies. Those new to the series will be able to jump right into village life with no need for an introduction. The setting is lovely and the characters worth getting to know, but there’s also a brutal murder to keep readers wondering as information is gathered and analyzed. Martin Walker succeeds in taking the reader to a town in southwestern France and bringing its people and their history to life.

With Police Chief Bruno Courrèges, the author has created a character who is ready to enjoy the timeless pleasures of village life and to confront the violence that finds its way there. The courageous Bruno is the star attraction in The Resistance Man.

Ellen Roehl is a retired librarian with a master of arts in Italian and a master of Library Science from the University of California at Berkeley.