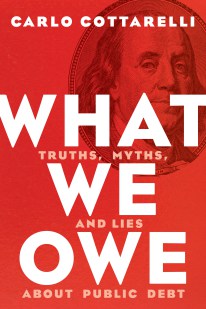 Published at a time when public debt in the U.S. is about to skyrocket, What We Owe: Truths, Myths, and Lies About Public Debt by Carlo Cottarelli is a timely and important book, but not an easy read.

The author, who saw the Greek, Italian, and other crises firsthand while at the International Monetary Fund, explains why we should worry about public debt. He points out that we usually think of public debt as a political issue owing to its implications for public spending and taxation decisions, but we need to better understand its economic impact, given its direct link to our national wellbeing.

The book explains what public debt is, why and when it can be harmful, what can be done to reduce it, and the benefits, risks, and undesirable side effects of doing so.

Cottarelli starts out by noting that a government’s budget is different from a household’s budget. Governments can raise revenue through taxes. Public debt is also reduced when the economy grows, which results in more tax revenue. Governments can also borrow money by selling securities (treasury bonds, etc.) to investors, and they get much lower interest rates than a household or company because government securities are considered essentially risk free (although governments do default). In the United States, “Between year-end 2008…and year-end 2015, about one-third of the increase in public debt was purchased by the Fed.”

However, like a household, when interest rates go up or the economy slows down, governments are vulnerable. If a government is financing a primary deficit, it borrows to roll over securities that are maturing, pays interest coming due, and finances the additional gap between revenue and spending:

“Then a snowball effect arises: the government borrows faster and faster simply to survive. This can go on for a while until investors understand that the indebted government does not have a flow of primary resources to services its debt. When they realize it does not, and that it has no prospects for having one, everything suddenly collapses.”

Our own experience tells us that financial crises can develop unexpectedly; Cottarelli had a front-row seat in 2011-2012 when Greece, Portugal, Ireland, Spain, Italy, and Cyprus got into serious trouble. Investors start having doubts that they will be paid back and stop buying government paper — meaning governments are unable to roll over their debt.

This forces them to quickly cut spending or raise taxes, which immediately hits the economy. Private-sector investors take their money out of the country, the economy collapses, GDP declines, and unemployment goes up. This was especially problematic for countries in the Eurozone, which do not have their own central bank to buy government paper at will.

Some of the key questions the author answers that make the book a worthwhile read: Why worry? What causes financial crises to develop unexpectedly and what countries are at risk? What are the risks of having a large share of government deficits financed by central banks? Why hasn’t this approach, which has greatly accelerated since 2008 in large part due to the financial crisis, caused inflation? Have we postponed the day of reckoning? Does high public debt harm economic growth even in the absence of a crisis?

Chapters are well organized, and sections are set up to address key topics, such as “What monetary policy can do to alleviate the immediate drawbacks of high public debt,” which engages the reader. Unfortunately, the book often reads like a textbook, with numerous references to later chapters meant to further explain complex concepts.

A brief explanation when an issue is first mentioned would allow readers to better grasp the implications of the point being made. However, the chapter-six recap is welcome, as is a chapter devoted to the Greek crisis, which illustrates earlier points and offers an object lesson on unsustainable public debt.

The last four chapters are particularly relevant, addressing monetary and fiscal levers that governments have to promote economic growth and reduce public debt. Cottarelli discusses structural reforms in a section with a telling subtitle, “The Myth of Structural Reforms,” and makes a particularly relevant point for the U.S. economy in the section on “Secular Stagnation.”

He notes that what worries him most is that “income distribution in many advanced economics has moved toward the rich since the beginning of the 1980s, reversing a trend that had been observed since the early twentieth century. In the United States, for example, the income of the richest 1 percent of the population now accounts for 20 percent of overall income, against 8 percent at the beginning of the 1980s and 18 percent in the early 1900s.”

Cottarelli points out that “if the middle class loses too much purchasing power, aggregate demand…does not grow fast enough, because no matter how hard they try, the very rich cannot consume enough to replace the declining demand from the middle class. To offset this insufficient demand, the approach following during the 2000s and to a less successful extent in the 2010s, has been to run expansionary monetary policies that would reduce interest rates and induce the middle class to borrow more.

“In other words, the average American family might have lower income but could continue consuming by borrowing more.”

Readers will be happy to know that the book includes recommendations on what can be done, and the author reassures us that “there is still time for an orderly, gradual reduction in public debt ratios…focusing on a combination of growth-enhancing policies and a moderate degree of fiscal austerity.”

He ends with the reasons why we should worry and a caution that “procrastination is becoming more and more dangerous for some countries…and there is no room for complacency for any country lest we are forced to revisit the lesson of centuries of economic history.”

We can’t say we weren’t warned.

Linda Nemec is an economic-development practitioner, analyst, and observer. She is vice president of Nathan Associates, an economic-consulting firm established in the 1940s by Robert Nathan, an economist at the U.S. Department of Commerce involved in the creation of the concept of GDP.