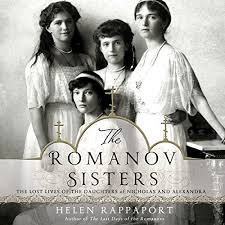 In Helen Rappaport’s introductory note for The Romanov Sisters: The Lost Lives of the Daughters of Nicholas and Alexandra, she gets right to the point: This book will have nothing to do with Anna Anderson, who claimed to be the surviving Grand Duchess Anastasia and inspired two popular movies, among other works. For those unfamiliar with the royal family beyond the fact that they were killed after the Russian Revolution, and the subsequent rumors that one or two escaped execution, this may seem harsh.

However, after just a few chapters of Rappaport’s detailed and vivid description of the courtship of Nicholas and Alexandra and the births of their four daughters, readers will understand why she does not care to waste time on what amounts to an overly sensationalized historical footnote.

Rappaport brings the personalities and relationships of these historical figures to life so effectively that the book’s length and meticulous attention to detail will not dissuade readers who might otherwise struggle with heavy history books. From the moment Nicholas Alexandrovich, the heir to the Russian throne, and his third cousin Princess Alice, the granddaughter of Queen Victoria, agree to write each other in secret despite the matrimonial obstacle presented by their different faiths, readers will be hooked.

Alice — who became the Empress Alexandra — finally agrees to marry her Nicky and forgo the Lutheranism of her German upbringing after he tearfully proposes at a family wedding five years later. But while theirs was a happy match — unusually so in the annals of royalty — there were signs from the beginning that all would not be well.

Alexandra suffered from sciatic pain that sometimes left her unable to walk — one of several ailments that would cause her to frequently miss the “winter season” celebrated by nobility in St. Petersburg between Christmas and Lent. This, along with her distaste for the excesses of that aristocratic society, would lead her to withdraw further and further into private family life, which allowed nasty rumors about her to thrive.

This awkward introduction to life on the Russian throne was only compounded by Alexandra’s first four children being female. After the birth of the youngest daughter, Anastasia, Nicholas and Alexandra turned in utter desperation to a French faith healer named Philippe, who — along with advising the couple to pray to a saint who had not actually been canonized — suggested beginning a short war. Nicholas, it is clear, never had the disposition to run an empire — that a faith healer apparently convinced him to start the Russo-Japanese War in 1904 was, sadly, just the beginning.

Philippe was eventually succeeded by the more notorious faith healer Grigori Rasputin. In retrospect, the coming together of the Romanov family and Rasputin — whose shady reputation made the Russian people even more suspicious of Alexandra — seems almost inevitable.

Alexandra and Nicholas finally had a son, Alexey, but from the moment his umbilical cord was cut, it was obvious something was wrong. The family remained loath to fully admit that Alexey suffered from the hemophilia known to be in Queen Victoria’s line, and the nature of his maladies was never made public during that period.

But the panic that consumed the family as they tried to keep Alexey alive and his health a secret led them right to Rasputin, who had the uncanny and mysterious ability to relieve the swelling and debilitating pain from the internal bleeding that resulted from even minor bumps and falls.

No matter how the imperial doctors (who were unable to do much at all for hemophiliacs at the time) grumbled, Rasputin’s eerie power to ease Alexey’s symptoms — even, on occasion, through prayers made in absentia, or a telephone conversation — earned him the Romanovs’ undying loyalty and love.

Where Rappaport’s writing really shines is in her description of the personalities of the titular sisters. The engaging and energetic girls — Olga, Tatiana, Maria, and Anastasia — serve almost as antidotes to the gloomy nature of much of the story.

Olga, the eldest, fell in love with several charming soldiers during her short and insular life — those in her family’s service and those she and her sisters nursed during the first years of World War I. After a letter arrives from a favorite Georgian soldier, she jumps up and down and cries, “Is it possible to have a heart attack at 20? I think I might just have one.” Tatiana, a renowned beauty, was more reserved and seemed to find her calling during the war — assisting in surgeries and amputations without hesitation.

The youngest, Anastasia, had perhaps the strongest personality: She was never interested in following rules, drove her tutors crazy, and made her father laugh by making funny faces at the dinner table, even during their time in captivity after the revolution.

Quiet Maria’s character is harder to make out, but her winning sense of humor shows in an excerpt of her letter about a cemetery caretaker attempting to help her across a ditch to visit soldiers’ graves in knee-high snow: “He did not of course manage to lift me to the other side, but dropped me right in the middle of the ditch. So there we both stood in the ditch, up to our tummies in snow and dying from laughter.”

The girls’ consistent determination to remain optimistic in the face of every tragedy and threat will make readers dread the story’s conclusion all the more. However, Rappaport’s skill in recreating their world makes the read rewarding despite its dark conclusion.