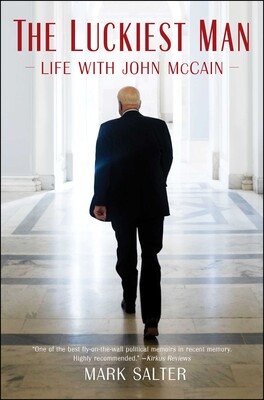 John McCain was a war hero, a U.S. senator, a presidential candidate twice over, and a towering giant to Donald Trump’s evil depths, but a “lucky bastard,” as he liked to call himself, he was not.

McCain did not somehow fall into his role as statesman. He was an American prince born to the part, the son and grandson of admirals. He grew up with privilege and was protected by that privilege when he acted out as a young man or made downright awful life choices and political mistakes later. But he was also imprisoned in Vietnam while fighting for his country and in those five years of adversity proved himself truly noble.

The “lucky” pretension is a form of political correctness that has great, if illusory, lineage. There is a George Washington story where the Father of Our Country knew the Continental Army needed a commander-in-chief and that he was quite possibly the best candidate. But he also knew that to show naked ambition would sink his chances. So, instead, Washington visited with members of the Continental Congress, pressed the need for a single commander, and demurred when asked if he wanted the position. He was appointed on his way back to Mount Vernon.

The story may be apocryphal, but it highlights a pervasive narrative in American politics that true leaders are called to serve rather than possessing an ambition to do so. Reading Mark Salter’s The Luckiest Man, it’s clear that the late John McCain held closely to that narrative, and that Salter, his employee for nearly three decades, co-author of seven books, acolyte, and friend, seeks to preserve the image.

McCain was lucky, but not only in the way Salter reports it. Yes, the former midshipman had a chip on his shoulder about graduating fifth from the bottom of his class at the U.S. Naval Academy, but did the ranking really hurt his life chances? Did he feel so entitled that he intentionally broke rules at Annapolis without crossing some imaginary line? I would love to read about a Black midshipman, or any Black man, who could demand the right to determine his own personal line of honor.

And McCain was certainly lucky to have survived North Vietnamese capture and torture, but it’s also true that the Hanoi regime knew exactly who he was and kept him alive in the hope of trading some advantage.

Based on this book, it is hard to say if McCain was lucky or plucky. Was he a maverick, as he was often called, or a traditionalist who valued antediluvian notions of honor?

He brushed aside the gracelessness of abandoning his wheelchair-bound first wife to marry beer heiress Cindy Hensley and pursue a political career in Arizona, a state he had never lived in before. And the book glosses over how McCain countered the carpetbagging charge when he first ran for Congress from the Grand Canyon state.

He moved there in 1980 to exploit a newly vacant seat and was elected to the House of Representatives in 1981. Salter writes admiringly of how McCain shut down a journalist asking about his residency with a one-liner — “The longest I have lived anywhere is Hanoi” — but writes nothing about how McCain won over hardened local Republicans who wanted him to prove his chops in state politics before sending him to Washington.

Even Barry Goldwater, the state’s kingmaker, was unsure about McCain. The book offers McCain’s winning personality as the answer — once you met him, you were his — but I have a hard time thinking Salter’s description of McCain as a bipartisan, independent nonconformist was what sold the Arizona GOP on the arriviste.

It may have been more that McCain started his political life as a Reagan Republican, hobnobbing with the Gipper and Nancy even before launching his own political career. There is also plenty in the book about McCain’s love of country and commitment to honor, and even some mentions of strong defense and free markets. Yet Salter maintains that the overarching reason he succeeded was because McCain was McCain. He was his own man.

To that end, McCain worked with Democratic senator Russ Feingold on a campaign-finance-reform law that angered Republican colleagues and with Ted Kennedy on immigration reform. (He also escaped the fire of the Keating Five corruption scandal with mere singes.) But McCain’s most-beloved fellow politician, it turns out, was Arizona Democrat Mark Udall. To the contemporary Party of Trump, all of this is proof that McCain was, indeed, a RINO (Republican in name only).

McCain’s first presidential campaign, in 2000, generated magic, if not success. The country had entered an era of deep polarization with the Bill Clinton impeachment. McCain offered a different path from the other American prince also running to be the Republican nominee, George W. Bush. But the latter, who represented a more intensely GOP platform to McCain’s promise of bipartisanship and independence, prevailed.

Salter’s insider accounts of McCain’s two presidential bids offer the play-by-play action that political junkies love, but the bottom line was that the senator stumbled both times, and that the Republican Party was moving away from him.

In his 2008 campaign, during which he won the nomination, McCain sought to stem his growing GOP estrangement by choosing as his running mate Sarah Palin, Alaska’s first-term governor and a darling of the party’s right wing. The decision, surely one of the worst in modern political history, not only hurt his candidacy but also legitimized fringe conspiracy politics on the national stage. Palin’s rise is widely believed to have opened the door to Trump. (Trump’s later insulting of McCain’s P.O.W. status — “I like people who weren’t captured” — had to have hurt.)

The senator’s public resistance to Trump and Trumpism brought him redemption in his final years. And by the time he died of a brain tumor in 2018, he had entered the pantheon of venerated elder statesmen like LaFollette, Taft, Vandenburg, Wagner, Russell, and Moynihan. But while John McCain was, no doubt, a lucky man, Mark Salter’s effort to humanize the often blunt, hot-tempered, and — by contemporary definition — entitled American prince is confounding.

The author might have benefited from a few more years of contemplation before attempting to capture the essential appeal of someone who nobly refused to crumble under horrific torture and called his first presidential campaign “the Straight Talk Express,” yet gave us Sarah Palin.

Sunil Dasgupta teaches political science for UMBC at the Universities at Shady Grove.