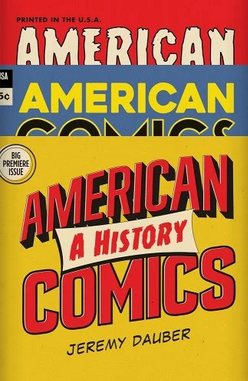 American comics — notably those from the D.C. and Marvel stables — are enjoying a renaissance driven by nostalgia for the golden years of the 1980s and 90s, just prior to the advent of the internet. Geekery (especially in the form of the colorful-tights-and-capes movie spectaculars that have become a multi-billion-dollar juggernaut) is now cool. And what was once a mass-produced, disposable entertainment for children has grown into a genuinely collectible medium that’s no longer a source of ridicule but instead carries true cachet.

While few historians have explored the artform with any great degree of rigor — a shame considering it’s one we here in the U.S. encounter throughout our lives — comics are beginning to attract more scholarly attention thanks to the industry’s renewed radness.

Jeremy Dauber, who taught a course on graphic novels at Columbia, lets his love for the medium shine through in the painstaking detail with which he renders the sweep of sequential-storytelling history in American Comics. Even if he overdoes it in places, such as when he chronicles comics’ nascent years, his eye for minutiae is warranted.

While this thorough work may be a little niche for the average reader, it intelligently analyzes the medium’s contributions and cultural impact through comics’ early genesis in U.S. newspapers to its present-day upending of the entertainment universe. The medium’s widespread fragmentation and dispersal, however, means the traditional format of “the comic” — its production and distribution, especially by large publishing houses — is at an inflection point.

Throughout his book, Dauber makes a compelling argument that we can view, through the lens of comics’ content, how America sees itself. And that is true. The stories told on those four-color pages have always reflected and drawn from the currents of society at the time of their telling. (One minor quibble with American Comics is that, for a history of a visual medium, it includes no illustrations, which may disappoint some readers.)

Ironically, while comics have long been dismissed as being “for kids” and subsequently excluded from “serious” art criticism, their widespread popularity and reach mean they have almost surely had a more profound impact on modern culture than any critic-lauded or gallery-exhibited artists or works.

Millions of creators are today producing comic content. Independent comics, where the creators own their product, are on the rise, and artists have more access than ever before to technology that enables them to share their craft and build their audiences. When measured by that metric, the industry is thriving.

But the traditional medium for comics — print — is dying; digital is taking over. As with any print-reliant industry (books, newspapers, and magazines included), the tumultuous changes in technology have toppled distribution systems and tanked the bottom lines of the largest comic-publishing houses. The old-school collectors, hobbyists who have long sustained comics’ monthly print runs, are aging.

Not only are readers’ consumption habits changing, but tribal debates about Marvel’s and D.C.’s business models in the face of shifting demographics and social mores are splitting audiences. These ruptures broadly trace today’s political divisions. For the so-called “Big Two” and other publishers, navigating these societal crosscurrents while maintaining a wide readership seems an impossible task. Ham-fisted attempts to appeal to social-media-driven trends have failed, exacerbating declining sales figures.

American Comics allows us to glimpse the scope of that decline, yet Dauber offers a hopeful, dare I say rosy, assessment of the industry’s future in his final chapter. As a medium, comics — or sequential storytelling, or whatever else you choose to call the intersection of words and pictures laid out in panels — will endure. But as far as comics ever again being an item of mass consumption rather than an artisanal hobby? Well, that’s the question.

Cliff Cumber is a former journalist who now works in communications. He is also a part-time comic-book artist, podcaster, and fan of the small-press comics industry. He lives in Maryland. Follow him on Twitter at @cgcumber.