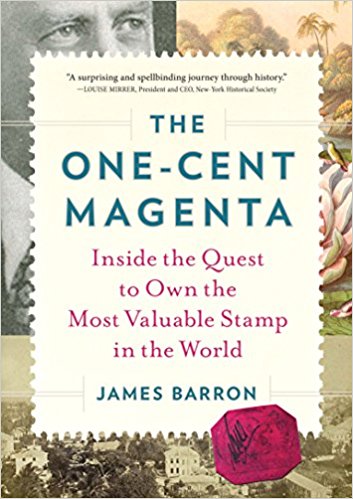 Like many of my generation, I collected coins, baseball cards, and stamps. I also built models. I remember the pungent, eye-watering odor of Testors paints and sealers, which I applied to balsa models of ships and planes.

While collecting was tactile and joyful, I suspect there was a developmental compulsion to make sense of a wider, mysterious world. Even as a 10-year-old, I pursued complete collections of the ordinary, though I hoped for the elusive rarity.

James Barron, in The One-Cent Magenta, tells a tale about the rarest stamp in the world, a story as compelling as fiction and as real as my childhood memories of collecting. Just as many of our adult collections anchor us in a meaningful past, Barron’s story of a one-of-a-kind stamp is contextualized within its political, social, and economic history.

The author follows that history as the magenta journeys from South America to Great Britain, France, and ultimately, the United States. The stamp becomes, really, the central, if not mute, anthropomorphized character in a kind of genealogical exploration spanning almost two centuries. In fact, the magenta has been referred to as “big baby” and “magenta lady.”

Writing in the first person, Barron makes the real-life characters feel intimate and familiar. But his somewhat folksy style belies the significant research that undergirds the work. Almost casually, he binds biography and autobiography in the family stories of the “relatives” of the magenta. Provenance, after all, is pedigree. But he also pursues a theme about “an arcane parallel universe peopled by collectors who are weird and crazy, obsessed and obsessive.”

Beginning and ending with the process of auctioning the magenta, the author introduces us to David Redden of Sotheby’s. As the frame for the narrative, Barron describes the auction for the very rich as being about high-stakes expectations and tastefully understated drama.

Redden has the task of researching, authenticating, and auctioning the magenta, part of the late John R. du Pont’s estate outside Philadelphia. Redden takes us into a philatelic warren of technology, forgeries, history, and the hopes for the imprimatur of authenticity by the eight members of the Expert Committee of the Royal Philatelic Society London.

In between, the author lays out the stamp’s journey, beginning in 1856 with its printing in British Guiana on the northern coast of South America. There, because of racial unrest, the postmaster ran out of British stamps and instead contracted for the local printing of some “provisional” one-cent stamps to be affixed to periodicals.

The stamp displays “a workman like image of a schooner and a Latin motto.” It has “the dull color of dried blood at a crime scene.” In fact, the magenta is totally unremarkable, relying instead on her singularity for her attraction. Despite her homely appearance, the stamp elicits what Barron calls “addicts [who] know the desperation of desire.”

In 1873, Louis Vaughan became the first “addict.” He was a 12-year-old who found the magenta among his uncle’s papers and sold it for $16.83 (valued in today’s dollars) to leverage other purchases at the beginning of the stamp-collecting era.

From British Guiana, the magenta traveled to Glasgow, London, and then to Paris in 1878. There, Philippe Arnold de la Renotière von Ferrary, an idiosyncratic aristocrat, “bought any stamp that came on the market…Ferrary was the stamp’s first owner who lived in a grand setting.”

Immigrating to the U.S. in 1940, the little red stamp continued to exert its gravitational pull on the arc of collectors’ lives. Then, in 1980, the magenta sold to John du Pont for an astounding $935,000.

The du Pont recluse called the bland stamp “the magenta lady.” And with his spectacular purchase, “The one-cent magenta had passed back into a world of money, privilege and into the odd life of someone who used the fortune he inherited to purchase what he lacked: Friendship, respect, and self-esteem.”

Indeed, by the 1990s, du Pont’s life began to deteriorate into paranoia and distrust. In 1996, he shot and killed Dave Schultz, an Olympic wrestler and coach at the du Pont-sponsored Foxcatcher wrestling center. Du Pont was tried and convicted; he died after 14 years in prison.

In 2014, the magenta in du Pont’s estate sold for $9.5 million to Stuart Weitzman, a shoe designer who said, “[The stamp] took me back to my childhood. It was sort of like going back to the home I grew up in.”

The mere existence of the magenta, the rarest stamp in the world, becomes a Rorschach test: Each collector sees in it a balm, a reassurance, or an antidote to personal insufficiencies. Each acquired the stamp because he could: Each wrestled with mortality and frailties. The magenta more often revealed character than improved it.

In the end, the stamp becomes almost incidental. That dull, ultra-rare one-cent magenta remains captured in amber. However, Barron’s layered, complex genealogy-of-motivations for the stamp’s suitors becomes the narrative’s yeasty and compelling attraction. After all that, I’ve come to hope Barron and I might go for a beer, so that I can hear even more of this engaging backstory.