Under My Bed and Other Essays

The body keeps the score in these reflections on fear and female autonomy. 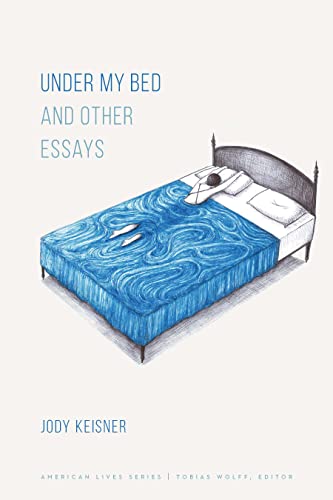 Jody Keisner would seem to have the perfect life — a loving husband, an adorable daughter, a fulfilling career — but she cannot quell an uneasiness that strikes her when she’s alone in the evening. Fearing an intruder, she obsessively checks the entry points into her home and all the spots where someone could lurk.

In her debut collection, Under My Bed and Other Essays, Keisner explores the sources, manifestations, and effects of this acute anxiety; the physiology of emotions and chemical repercussions of bodily changes; the eternal question of nature versus nurture; and what it means to inhabit a female body.

Divided into three parts, the book launches with “Origins,” in which Keisner searches for the roots of her extreme nervousness. She points to the glut of TV series “where women and girls are regularly and disproportionately brutalized,” slasher and serial killer films, and national statistics (“at least one woman is raped every hour in America and about twelve out of every hundred thousand women are victims of homicide”), concluding that violence against women has become fetishized in our culture.

But the true fundament of her fear is her father, a man with an explosive temper that sometimes manifests in physical violence, and with a fondness for playing sadistic tricks — like crawling into her bedroom at night to grab her leg. As an adult, she comes to understand “that my father unwittingly conditioned me to fear bedtime.” He also taught her to view men as entities who get pleasure from victimizing women.

Referring to a popular sci-fi TV show that terrified her as a kid, Keisner writes: “People were never what they seemed on V, and neither was my father.”

In “Fracture,” the author examines another source of anxiety, her adoption. Adoptees’ lives are populated with people who aren’t what they seem: genetic strangers who play the role of close family members and biological relatives who reject familial relationships. These confusing connections erode trust before a child even comprehends what trust means. Keisner’s best friend shatters her sense of normality by asking, “But who is your real mother?” Being called “special” by her parents means she cannot be average or weak for fear of another abandonment.

With the birth of her daughter, Lily, Keisner realizes a new fear: “My baby could be hurt because of something I did wrong, something easily prevented.”

When Lily finds her mother on her hands on knees, checking under the bed, Keisner understands it is a pivotal moment in both their lives. She could transfer her dread of home to her daughter, or she could conquer her behavior for the sake of her child’s mental health. “Mothering her has given me the strength to chase the boogeyman from my brain,” she writes. “I won’t check under my bed again.”

There is another threat, however, that’s very real: rheumatoid arthritis. If “Origins” can be read as the “nurture” part of the book — how the author developed into an overly apprehensive adult — the second section, “Under the Skin,” investigates the “nature” aspect through a physiological explanation of maternal and romantic love, the legacy of genetics, and an autoimmune disease in which the body misreads cues and attacks itself. Keisner becomes a member of the chronic-illness community and suffers through imperfect treatments.

In the last section, “Risings,” the author looks for meaning in suffering. By examining her loved ones’ life circumstances, she comes to forgive them their trespasses, especially her father’s. After failed fertility treatments, Keisner and her husband adopt a child, a decision made all the more fraught because she herself is adopted.

The final essay, “Woman Running Alone,” is a meditation on why men find a jogging woman so threatening. A powerful and moving piece, it is marred by the white woman’s tendency to make her experience the universal one. Even as she recognizes that “missing white girl syndrome” places greater value on Caucasian, conventionally pretty, well-to-do victims, Keisner ignores the case of Ahmaud Arbery and the issue of “running while Black” when she writes of her anger at her husband not recognizing that “male runners…can step out for a jog without once considering their safety.”

Through the example of the unrelenting harassment women face while running, the author addresses the quandary of raising a confident daughter in a world intent on controlling and shaming her. As she does with most of these essays, Keisner ends on an up note, imagining Lily “running alone on country roads surrounded by cornfields, the rustling leaves whispering their secrets from each narrow row, the stalks pulsing with green vibrant life.”

Each essay in Under My Bed is exquisitely structured and beautifully written, the personal substantiated by the factual, and every seeming diversion tying into the overarching theme. Although the author writes perceptively about the predicament of living while female, there were some issues that could have been more fully explored, such as a reflection on the fact that the threat she so feared came from within her own body instead of from the outside, and a much deeper contemplation of how being adopted may have contributed to her anxieties.

Ultimately, it is women who heal other women. The author’s grandmother’s parting advice to her is, “Don’t be afraid.” With these essays, Jody Keisner both enumerates the many reasons women should be afraid and the many ways grace and strength carry them past that fear and onto empowerment.

Laughing Shall I Die

World War C: Lessons from the Covid-19 Pandemic and How to Prepare for the Next One

A valuable primer on what we’ve been through and what may be to come.