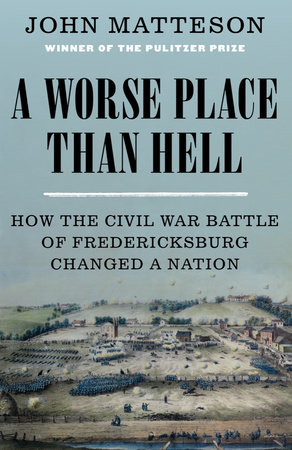 Among important Civil War battles, Antietam and Gettysburg are well known. The Confederate retreat from Antietam, the bloodiest single day in any American war, gave Abraham Lincoln cover to issue the Emancipation Proclamation. Gettysburg marked the high-water mark of the Confederate advance and then, in defeat, the beginning of the end for the South.

The Battle of Fredericksburg, Virginia, in December 1862 was not, as the hyped subtitle of this worthy book asserts, the battle that “changed a nation.” In truth, it was a disaster for the Union and not a game-changer for the South; the war would drag on for more than two years longer, at great human cost. Fredericksburg was a footnote. But it is the vehicle through which Pulitzer Prize-winning historian John Matteson tells a larger, more granular, and, frankly, more interesting story.

A Worse Place Than Hell is not, strictly speaking, a military history, though the reader learns about battle tactics and strategies. This is human history, in which Matteson skillfully weaves the biographies of “five heroes.” These include three iconic figures — future Supreme Court justice Oliver Wendell Holmes, poet Walt Whitman, and author Louisa May Alcott — and two lesser-known ones: dashing Confederate officer John Pelham, with his audacious horse artillery, and frail Union Army chaplain Arthur Fuller. The five did not directly cross paths, but each played a role in the larger conflict that brought them face to face with the grim realities of war.

Fredericksburg sits at the top of the narrative arc. Over five days there in December 1862, Union forces suffered 12,653 deaths, compared to 4,201 for the Rebels. The battle began with a senseless Union attack ordered by Gen. Ambrose Burnside, who committed his troops to what Lincoln called “a worse place than hell.”

Shot in the heel, Holmes was sidelined for most of the battle. Whitman and Alcott were back in Washington tending to the wounded. Pelham and his horse artillery performed bravely. And Fuller, a New England minister, had just been declared physically unfit for duty and honorably discharged but was determined to join the fight. He followed his troops into battle and was fatally shot on the city’s streets.

On the south side of the Rappahannock River and reached only by hastily assembled pontoons, Fredericksburg saw street-by-street, house-to-house combat. Having at first repulsed the Confederates, Burnside ordered yet another costly attack. This time, the Rebels simply withdrew. The general was faulted for his leadership and soon demoted. Despite the disaster and an unrelated feud within his Cabinet, Lincoln issued his Emancipation Proclamation two weeks later.

Meanwhile, both Alcott and Whitman, tending to Union soldiers at hospitals in the District of Columbia, became ill. Matteson paints a picture of hospitals overwhelmed, with medical staff exhausted and stretched thin (as if in a pandemic).

Alcott, who nursed the critically wounded in Georgetown, contracted pleurisy after just six weeks; her father traveled by train to Washington to bring her home. Her bestselling Little Women would incorporate her perspective from the war. Whitman, who worked as a clerk for the U.S. Government, provided support that was more palliative than medical in his daily hospital visits. His war poems were inspired, in part, by his own experiences.

Holmes, thrice wounded — at Ball’s Bluff, Antietam, and Fredericksburg — served out his three-year enlistment in DC, including at Fort Lincoln, where he allegedly told the visiting President Lincoln, “Get down, you damn fool, before you get shot!” A Boston Brahmin, Holmes returned home to study law. He was appointed to the U.S. Supreme Court in 1902, serving into the 1930s. His Civil War uniform never left his closet.

Was it coincidence or fate that brought these protagonists to the same theater of war at the same time? Each came from somewhere different — physically, economically, culturally — yet all five were innocents at home who would lose that innocence in what was to every one of them a foreign place.

The Civil War has often been described as fratricidal, pitting brother against brother. Matteson suggests it was as much generational, with offspring being sent to fight a war over issues their parents could not peacefully settle: slavery and secession. But that implies there could have been a peaceful settlement. One is reminded of abolitionist John Brown’s last written words, in a note before his execution: “I am now quite certain that the crimes of this guilty land will never be purged away, but with Blood.”

Matteson is an elegant writer, and his narrative is compelling and often cinematic. His description of death — he uses the word “slaughter” in describing the Bloody Angle in the Wilderness Campaign, an unsuccessful Union attempt to take Richmond — is far more vivid than what is found in most military-history books.

Despite the book’s many strengths, though, there are some missed opportunities to enrich the story. Pelham, of the horse artillery, brought two slaves with him to the front, which was not uncommon for officers of the Southern gentry. But we are left wondering what became of them after he died in battle.

Similarly, the author writes about Holmes in the Wilderness Campaign but fails to mention the important role of the U.S. Colored Troops engaging there in their first battle while guarding wagon trains. As a New England abolitionist, did Holmes know or care about these new comrades in arms?

In an interesting aside, Matteson mentions Henry Villard, an intrepid reporter who eludes military censors to break the bad news from Fredericksburg. He fails to mention, however, that Villard went on to become a railroad magnate and New York newspaper publisher married to the daughter of abolitionist William Lloyd Garrison (and that their son Oswald Garrison Villard was also a journalist who, with his mother, Fanny Villard, was a co-founder of the NAACP). Such information would have added more depth or at least made for an interesting footnote.

Matteson tends to be more critical of one of his “heroes” in the epilogue, noting that Pelham, for all his bravery and bravado, “served the cause of state’s rights and slavery” and still “stands for the self-image of which the South has needed to let go but that has proved too beguiling for some of its citizens ever to overcome.”

Confederate veterans and their descendants, he continues, “could point to Pelham to convince themselves that the war had not been horrible, but courtly and glorious.”

Similarly did descendants of Fuller, who was only briefly famous, embellish his story. In truth, Matteson writes, “he was much less an icon than an emblem; a representative of the countless warriors who gave all that they had for a cause they revered, but whose memories, despite their earnestness and valor, have had scarcely more permanency than initials carved into a block of ice in early spring.” In that last metaphor, Matteson’s writing soars.

In the end, Matteson declares that, taken together, his protagonists tell “a story of courage.” And of the nation divided then, as now, he quotes Walt Whitman’s soulful postwar observation that “the [country’s] lack of a common skeleton continuously haunts me.”

A surviving spouse chronicles her journey through grief.