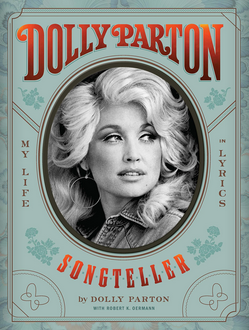 How does a legendary singer, songwriter, actor, and icon top herself in 2020? If you’re Dolly Parton, it’s no big deal. You just make a huge financial and promotional donation to some of the folks developing a vaccine to conquer covid-19.

“Without a doubt in my mind, her funding made the research toward the [Moderna] vaccine go 10 times faster than it would be without it," Dr. Naji Abumrad told the Washington Post in November. He’s part of the Vanderbilt team that developed it, so he should know.

Madame Curie’s got nothing on Parton. The important research about radioactivity and whatever else Marie did was fine, but she probably couldn’t even carry a tune.

Standing just five feet tall, minus wigs and heels, Parton has always towered with talent and stage presence in the “rags-to-rhinestones” story she captures in her new book, Dolly Parton, Songteller, which uses lyrics from 175 of her songs as a springboard to tell the tale.

Part Mae West, part Dorothy Parker, and part Patsy Cline, Parton boasts incredible abilities that have, at times, been overshadowed by her costumes and other...enhancements. But the songcraft and voice are pure genius. Elton John wearing a duck getup or Beethoven wig onstage was silly and funny, but it didn’t change the fact that the man could write and play. Same with Dolly.

“I am a singer, an entertainer, and a businesswoman,” Parton writes. “But if I had to choose just one thing to be, I would choose to be a songwriter...Everything I am starts with that song. No matter who you are as an artist, if you don’t have a great song, you’re not going anywhere.”

She’s written some good ’uns. From “Jolene” to “Coat of Many Colors,” from “I Will Always Love You” to “9 to 5,” she’s equally adept at lyrics and melody. Her book is well served by using her songs as the foundation for an interesting narrative because she is such a good storyteller in her music.

Beginning with the first song she ever wrote, at age 6, an ode to her corncob doll, Parton was encouraged by her parents, who long remained a powerful and positive influence in her life. “Coat of Many Colors” came from an experience as a child when Mama sewed her a coat out of various rags because the family was poor. To make Dolly feel better, her mother told her about Joseph and the “coat of many colors” from the Book of Genesis.

“So that little song is like a world of things,” Parton writes. “It teaches about bullying, about love, about acceptance, about good parents. You have to accept everything and everybody.”

The book is also fascinating and revealing when it peels back the layers of the complex relationship she had with singer and band leader Porter Wagoner. In something of a Nashville-flavored “A Star Is Born” — before the Lady Gaga/Bradley Cooper incarnation — Parton eventually eclipsed Wagoner, her older, male music partner, but not without a lot of tension, tears, and even a lawsuit along the way. She wrote “I Will Always Love You,” and performed it first privately for him, as a way to tell him their partnership must dissolve.

Parton’s voice shines, along with her indomitable spirit, throughout the book. She’s open about her career ups and downs, as well as some serious health issues.

(Parton even survived making a musical with Sylvester Stallone! The Mayan civilization was decimated by less. In fact, she defends Sly’s attempts to sing and believes the songs she wrote for the ill-fated “Rhinestone” are among her best. If Dolly says it, it is so.)

She also documents some of the fun and productive encounters she’s enjoyed with many of the greats: Tammy Wynette, Linda Ronstadt, Emmylou Harris, Willie Nelson, and a wide net of others, including Andy Warhol.

Even those city slickers on “Saturday Night Live” acknowledge the majesty of The Dolly. “I want to be Dolly. Who doesn’t?” said SNL’s Melissa Villaseñor during her excellent Parton impression on the show a couple weeks ago. “She’s a great singer, she writes her own songs. She donated a million dollars to the vaccine.”

The most honored female country singer-songwriter of all time, Parton has won 10 Grammys and four People’s Choice Awards and been nominated for two Oscars. Somehow, though, the current array of prizes feels too small.

I’m calling on more imaginative minds than mine to come together and create a new award combining the best of what the Nobel, Pulitzer, and MacArthur folks are peddling. Then name Dolly Parton its first and only recipient and watch our troubled world begin to slowly make sense again.