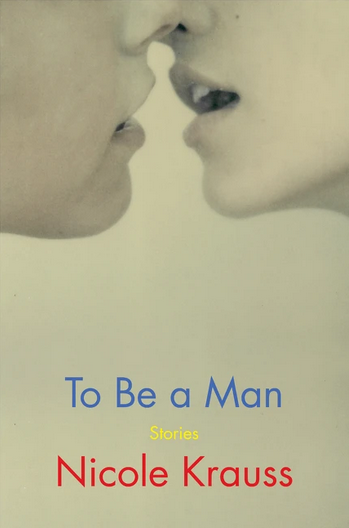 Nicole Krauss’ To Be a Man was nearly two decades in the making, with some of its stories appearing in magazines as early as 2002. But this lengthy incubation doesn’t suggest a search for an overarching epiphany. Seeking such cohesion is beside the point in exploring this debut collection. It’s neither a linked assemblage nor a work focused on a particular set of characters or location.

However, the arrangement of stories does suggest a pattern that magnifies the individual scope of each story. There is a compelling symmetry at play here, with the opening and closing stories exploring what it means to step through the threshold of pubescence and into socially defined gender roles: womanhood in the opening story, “Switzerland,” and manhood in the closing one, “To Be a Man.”

In “Zusya on the Roof,” the second in the sequence and among my favorites, a man absconds with his newborn grandson just before the baby’s bris. This story is delightfully paralleled in the penultimate tale, “The Husband,” in which a woman learns that her mother has moved in with an elderly man claiming to be a long-lost spouse just as the woman’s nephew is born and falls ill. These stories juxtapose and challenge the preconceptions we carry about aging, birth, and change.

Likewise, there are echoes between the stories “Amour” and “Seeing Ershadi,” ­in how the characters engage with film as a way of processing — as if at an angle — the unstoppable forces of death and renewal.

What unites these stories is not necessarily a singular thematic preoccupation, though many of the themes that appear in the rest of Krauss’ oeuvre are also present here: the tensions between community and isolation, between religious legacy and individual freedom, between the needs of the body and the desires of the mind.

Several of the stories explore — in a vertical plunge through time and space — a character’s reckoning with a single marker of identity: the sexual politics of femininity in “Switzerland,” for instance, or the weight of familial and religious legacy in “Zusya on the Roof.” Others explore the ways in which, in order to survive, we sometimes lull ourselves into the tempo of living.

Krauss explores these questions beautifully in “I Am Asleep but My Heart Is Awake,” in which a woman returns to her recently deceased father’s apartment to live with his sleepwalking roommate; “Future Emergencies,” in which a woman contemplates leaving her much-older boyfriend as Manhattan prepares for an imminent disaster; and “In the Garden,” in which a man feels trapped in a romantic relationship with his employer but cannot find the courage to leave him.

Krauss’ fiction is not speculative, not in the technical sense. But there is a wondrous playfulness at work that will appeal to fans of that genre. Fans of Lorrie Moore’s “Like Life” may enjoy the aforementioned “Future Emergencies,” in which the New York City government distributes gas masks in anticipation of a mysterious, seemingly impending calamity.

What fascinates me is the granular texture of these stories, so full of divine detail that they unfold like the stuff of memoir. The centrifugal core of this collection is the author’s sensibility, the transcendent lucidity of her prose, and the exactness of her world-building. Her stories are anchored in a reality so densely and meticulously textured that they sometimes read like autobiographical fiction, even if the events described seem larger than life.

Each story offers Krauss’ unique lens, held up to situations that look ordinary at first glance. In “Seeing Ershadi,” the narrator describes a character in a way that captures what is so captivating about Krauss’ work:

“There was no choice but to believe [her]…Her story was so precise that she couldn’t have made it up. Sometimes she exaggerated the details, but she did it believing the exaggerations, and this only made her more lovable, because it showed you what she could do with the raw material of the world.”

To Be a Man is a collection to get lost in. And when one emerges on the other side, the world still shimmers with possibility.

Yohanca Delgado holds an MFA from American University. Her writing has appeared or is forthcoming in Story, the Believer, A Public Space, and One Story, among other publications.

The Fell: A Novel