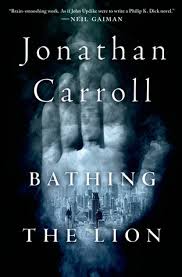 Jonathan Carroll’s latest novel has a brilliant premise: One night, five people in a small Vermont town share the same dream. We learn that they’re former mechanics: cosmic repairmen who travel the universe, fixing the trouble wreaked by Chaos. When they retire, their memories are wiped clean, and they’re sent to live new, mortal lives on any number of planets. Now, these five Vermonters are being called back to duty — but why?

Bathing the Lion is most engrossing when Carroll allows us to glimpse the peculiarity of life as a mechanic. They eat black, wriggling creatures called udesh and speak in a four-tiered language unintelligible to other creatures.

We are told that Chaos is bringing about a period of upheaval known as a Somersault, and the former mechanics begin to experience moments of uncontrollable time travel called flips.

“Isn’t it strange being in two time frames simultaneously?” says one mechanic to another. “It’s like having each foot in a different canoe on the water and trying to keep your balance.”

These details are notable because of their creativity, but also because they stand as the only moments in which the novel’s conceit is fleshed-out or concretized. Otherwise, descriptions of what exactly Chaos is wreaking — and why it must be prevented — are defined only via simple dichotomies.

Near the end of the novel, Vanessa points to a glass of water. “Think of this as the mechanics,” she says. “They represent order, stability, and the greater good of the cosmos at any cost.” Then she points to the saltshaker. “This is the Somersault — Chaos, Randomness, and Disorder. The opposite of everything a mechanic is and works to prevent.”

Between these two extremes lie human beings, who can both create havoc, like Chaos, and organize, like the mechanics. Carroll’s notion of retired, now-human mechanics as mixed-breeds — half god, half human — is interesting, but it’s unclear why or how this will be utilized in the battle against Chaos.

Just why our protagonists are called back to the job never quite becomes clear, either. Carroll’s imagination is unmatched by his delivery, which is alternately bland and whimsical, with surface-level characterization and world building. The battle between Chaos and its opposite — order, as maintained by mechanics — remains distant and undeveloped, surprisingly so for this well-decorated writer, who has won the World Fantasy Award.

Though the narrative is interested in human interconnectedness, Carroll’s former mechanics are stereotypically drawn, differentiated by one or two defining qualities: Vanessa Corbin is an overweight diva; Dean is her husband; Bill Edmonds grieves for his deceased wife. When individual identities begin to dissolve in preparation for a good-and-evil battle that still hasn’t begun by the time the book is finished, we feel as little for the mechanics as we understand the stakes of their world.

The novel begins with an unpromising observation: “Most men think they are good drivers. Most women think they are good in bed. They aren’t.” This statement, muttered by Vanessa while Dean readies to leave the house, prompts a break-up filled with equally poor dialogue (“Wow,” says Vanessa, when both spouses admit to disliking each other. “I guess that cat’s out of the bag now”).

After we’re introduced to three more characters — Jane Claudius, a lesbian bar-owner; Kaspar Benn, shirt salesman and dog-owner, who is having an affair with Vanessa; and Bill — we learn that the first third of the book was actually a dream. This device only serves to confuse the reader; Vanessa and Dean aren’t separating, but Vanessa and Kaspar have, in fact, had an affair?

The format might still have been effective if the dream had been “impossibly beautiful and awful,” as described on the book’s jacket. Instead, the characters find themselves on a road with a talking chair and a red elephant named Muba, both of which have little bearing on the narrative as it continues.

Carroll’s work, often described as magical realism, is known for defying categorization and narrative expectations. Indeed, his refusal to provide an easily digestible conclusion or a linear timeline sets Bathing the Lion apart, but not with great success.

What clarification there is feels clunky (“She’s already told Vanessa these things at the shopping mall right before the next flip brought the two women back here to the part of the dream on the country road with the others”), and the big questions the novel raises remain too big to tackle effectively. Longtime Carroll fans might revel in this latest offering, but for new readers, Bathing the Lion will likely fall short.

Chloe Krug Benjamin’s first novel, The Anatomy of Dreams, was longlisted for the 2014 Flaherty-Dunnan First Novel Prize. Her work is published or forthcoming in the Atlantic, the Millions, and elsewhere. She lives in Madison, WI, and on the internet at www.chloekrugbenjamin.com.