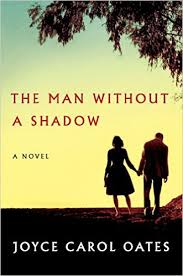 Hand to my chest, I read the first sentences of The Man Without a Shadow:

I’m already devastated. I settle in for the rest of the dark, wrenching carnival ride that only Joyce Carol Oates can deliver.

Now, will she deliver again?

The Man Without a Shadow follows the long career of neuroscientist Margot Sharpe, whose life changes forever when she meets patient Elihu Hoops (E.H.) in 1965. Margot, short and plain, is a reserved yet ambitious young Ph.D. student in neuropsychology. E.H. is the tall and dashing son of a well-respected Philadelphia family who is the subject of her lab’s experiments.

He is athletic, charming, nattily dressed — and because of a severe infection that has damaged his brain, he can no longer form new memories. His brain can only retain about 70 seconds of new information before discarding it, leaving him in a continually rebooting present:

“Elihu Hoops is trapped in a perpetual present, Margot thinks. Like a man wandering in circles in a twilit woods — a man without a shadow. And so he is thrilled to be saved from such a twilight and made the center of attention [at the lab] even if he doesn’t know quite why. How otherwise does the amnesiac know that he exists? Alone, without the stimulation of attentive strangers asking him questions, even the twilight would fade, and he would be utterly lost.”

Over the decades, Margot builds her scientific career on her research with E.H., while losing herself in an impossible love with a man who will never remember having met her. Despite her circumspect nature and career ambitions, she puts her professional reputation at risk by performing increasingly questionable experiments with Eli.

Her desire for a deeper relationship with him pits her against the boundaries of scientific ethics; and her motives and methods take a dangerous turn when she begins private testing with him in an attempt to develop physical and emotional familiarity.

But as the reader knows from the start, E.H.’s amnesiac condition is ultimately unchangeable, and Margot, in turn, stagnates. Oates charts the progress of these decades in packed, layered sentences, making liberal use of hyphens, italics, parentheses and exclamation points to guide us through Margot’s thoughts.

About halfway through the novel, Oates wanders from Margot’s point of view to Eli’s, and claims fluid access to both of their perspectives for the rest of the novel. Readers who are strict adherents to writing “rules” may be rendered apoplectic.

Oates notes in her acknowledgments a debt of gratitude to her neuroscientist husband. With its compelling meditations on the nature of thought, identity, memory and scientific research, the novel is clearly a result of extensive research and questioning of the field:

“Is it unjust, ironic? — that catastrophe in one life (the ruin of E.H.) precipitates hope and anticipation in others…? The possibility of career advancement, success? It is the way of science, Margot thinks. A scientist searches for her subject as a predator searches for her prey.”

In addition, Oates doesn’t shy away from depicting sexism and politics in science. There’s a thread of mystery in the novel as well, as memories of a dead (possibly murdered) girl resurface in Eli’s increasingly addled mind.

The dominant theme, however, is the steady, dismaying degradation of Margot’s life due to love and questionable judgment on her part — and not just vis-a-vis E.H. (But no spoiler alerts here!) The pain of her hopeless love dulls with repetition, until by the end we are a bit numb to her predicament. We don’t exactly mourn the life she could have had because she doesn’t seem to have had the nature to lead a full life in the first place.

Yes, some of her personal and professional limitations could be ascribed to the prevailing expectations of women in the 1960s, but throughout the decades she continues to make decisions that limit rather than expand her agency. And yes, she is aware that she has become eccentric (add to that ascetic, emotionally detached, isolated and alcoholic) but that awareness doesn’t necessarily make her a more dynamic character to follow.

Interestingly, Oates’ novel mirrors the scientific process Margot ponders early in the book: “Experimental psychology is in itself repetitive, and overall not so very inspired as Margot had thought at the outset of graduate school. Scientific ‘truth’ is more likely to be discovered by slow increments than by sudden lightning-flashes.” Oates similarly chronicles year after year of grim decline, punctuated by sudden, shocking acts that illuminate the depth of Margot’s delusion.

Decline itself is not the problem: In We Were the Mulvaneys, for example, Oates’ treatment of decline is dynamic, with characters who rage against it, or run from it, or completely change their lives because of it. In The Man Without a Shadow, however, Margot melts passively into decline’s embrace. She has, in a way, fallen victim to the predatory scientific repetition upon which she built her career.

Perhaps this message is exactly the point of Oates’ technique. Form follows function: Reiterate the endless loop that Eli’s ravaged brain has become, and lodge the reader in the emotional dead zone that Margot has entered by loving him. The author has perhaps inhabited the personae of her characters to a fault. It’s a very interesting intellectual exercise, if not an entirely emotionally satisfying experience.

The Secrets of Flight: A Novel