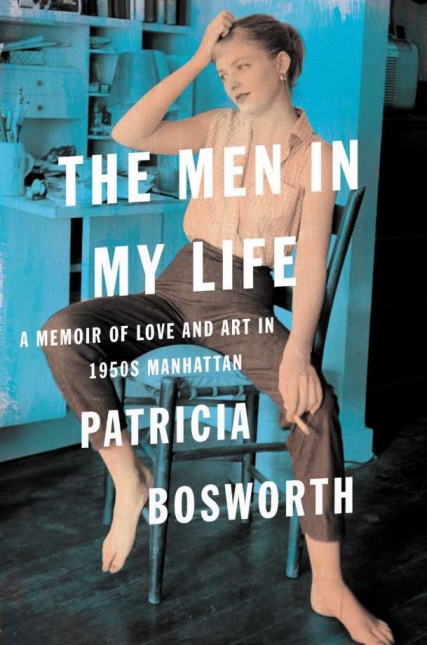 Patricia Bosworth is a well-regarded biographer who untangled the complicated lives of Montgomery Clift, Marlon Brando, Jane Fonda, and Diane Arbus. Her newest book, The Men in my Life: A Memoir of Love and Art in 1950s Manhattan, ventures to understand the dynamics of her family by meticulously analyzing her transformation from rambunctious rebel to “recalibrated” raconteur.

Born to privilege in 1933, Bosworth was the daughter of the dashing Bartley Crum, a prosperous California attorney — until he represented the “Hollywood Ten.” Hundreds of artists were maliciously accused of colluding with communists, then rounded up by Joseph McCarthy’s thugs, blacklisted, imprisoned, and often ruined.

Eventually, Crum’s alliance with them undermined his professional patina and compelled a move to New York to reassess his now precarious prospects. Ironically, the liberal Manhattan firms were equally queasy about Crum. He bounced among law practices while savings dwindled, alcohol gushed, and — in a frenzy to disentangle from a fistful of failure — he purchased a left-wing newspaper (which he was unable to alchemize into success), and botched his first whack at suicide:

“Mama wouldn’t discuss our father’s state of mind, let alone his addictions. He was supposedly okay — except he wasn’t. He was starting to medicate himself…I could tell the minute his speech slurred or his eyelids drooped…I’d start looking for…tranquilizers, uppers, and sleeping pills he kept hidden all over…Even so, Mama kept telling us ‘Everything is all right,’ in spite of the fact that Daddy still didn’t have enough clients, there were too many bills to pay…Mama didn’t or couldn’t deal with what was happening with my father. She evaded our questions; occasionally she told downright lies.”

Bosworth’s closest confidante during this and other calamities was her brother, Bart. They spoke their own “language” and explored the city right under the diverted eyes of their socially ambitious parents. The siblings were inseparable. But, after their father’s “incident”:

“[Mama] announced that Bart and I were going to be sent away from home…I was enrolled at the coeducational International School of Geneva [nicknamed Ecolint]. My brother would be attending Deerfield Academy in Massachusetts. He was overjoyed; I protested vehemently.”

Distance rumbled each of them differently. Bosworth grew defiant and simmered with boy-desire:

“I was barely cracking a book. Instead I necked passionately with some of Ecolint’s toughest, wildest students — rich Arab and Egyptian boys whose fathers were oil potentates.”

Meanwhile, the sexually awakened Bart was caught in a homosexual act with his best friend, Clark, who hanged himself the next day. The school rushed Bart home to a tepidly tolerant mother, a dad in denial, and a depression that never went away.

Bosworth eventually enrolled at Sarah Lawrence and eloped with Jason Bean, a fortune hunter she befriended in a bar. Suddenly, she was the maid in a dilapidated residence of five, which included Jason’s 96-year-old wheelchair-bound grandmother and her “noisy collection of birds. Her aviary was filled with dozens of them…some in cages, some on perches, all of them chirping from morning until night.”

Jason, for his part, was frustrated by the continuum of poverty and his in-laws’ refusal to unclench their moneyed pockets. He pounded Bosworth with verbal abuse, squalls of rage, and slaps. At near destitution, she took a job as a soda-fountain waitress, but he objected to the meager wages and emboldened her to seek worth as a model. With facilitation from friends, Bosworth got an appointment with John Robert Powers, “Who ran the biggest, oldest modeling agency in the country.” He thought Bosworth was “fresh faced” and almost immediately, she got jobs earning $50 per hour.

The marriage ended when Jason tried to choke her. She fled, and Bart rescued her. By then, he had quit MIT, but later enrolled in Reed College, and, at age 18, shot himself with a .22 rifle that had been a gift from his grandfather.

After Bart’s death and a Nevada divorce, Bosworth returned to New York, assumed her mother’s maiden name on her father’s advice, and “decided to audition for the Actor’s Studio.” Three months and three tryouts later, she became “a lifetime member…one of six who’d been accepted out of five hundred people.” Classes were taught by Lee Strasberg, with an audience of performers that included Marilyn Monroe, Paul Newman, Steve McQueen, Shelley Winters, James Dean, Eli Wallach, and Julie Harris.

The Method seeped in. Arthur Penn engaged Bosworth to play the lead in “Blue Denim.” She co-starred with Helen Hayes in “The Glass Menagerie” and understudied in “Inherit the Wind”:

“One night [Daddy] showed up backstage after a performance…to ‘see how my baby is’ and I realized he was high…I decided he had a powerful need to destroy himself. Was it over Bart? Did he ever feel remorse or shame or guilt about his son’s suicide? I was sure he must be in agony, but we never spoke of it…and there were no longer any pictures of Bart at home. Was this Mama’s choice? I didn’t ask. We remained a family of terrible silences.”

Not long after, Bartley Crum overdosed on Seconal.

In 1959, Bosworth was cast as Audrey Hepburn’s best friend in “The Nun’s Story,” but neither that role, nor four years as an understudy in Jean Kerr’s popular “Mary, Mary,” whipped up any wizardry in her career. Gradually, Bosworth pivoted away from the theater and reconfigured herself into a writer:

“I fell into jobs: one at Holiday…where I learned to compose elegant captions and short takes; then I graduated to movie-star profiles and editing astrology columns when I moved to McCall’s…In 1974, I signed a contract to write a biography of Montgomery Clift.”

It was the debut of a memorable 43-year-old oeuvre-in-process about the Golden Age of American Entertainment.