Sweet as Sin: The Unwrapped Story of How Candy Became America’s Favorite Pleasure

Despite its sugary title, this tale hits too many sour notes 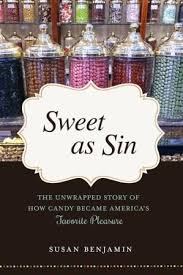 Reading Susan Benjamin’s Sweet as Sin: The Unwrapped Story of How Candy Became America’s Favorite Pleasure is a bit like whacking open a piñata. Lots of colorful treats spill out, but when you sit down to inspect your loot you find that not all the pieces are worth keeping.

The book begins at the annual New York Fancy Food Show sponsored by the Specialty Food Association. The author, on a road trip to research American candy, is cruising the endless food and beverage booths with her husband and two friends. The event turns out to have no relevance and is never mentioned again; we never hear about any candy or chocolate vendors who presumably drew Benjamin to the show in the first place. What does become clear is that readers who care about the craft of writing won’t find a lot of satisfaction in this book. Take this sentence, in the very first paragraph:

“Never mind I was looking for candy-makers, of which there was an abundant supply, but the Spanish contingent was delighted for me to taste their multitudinous selection of olives and the Mexicans for me, and the line of others that snaked into the aisle, to sample some sort of much-too-good alcohol blend.”

Unfortunately, writing like this makes it difficult to get at the information in the book, which is often interesting and revealing. Benjamin, a self-described candy historian, is owner of True Treats Historic Candy shops, in Harpers Ferry, WV, and Fredrick, MD. She conducts candy tastings and gives talks at museums, schools, and other venues. She is obviously passionate about her mission to place candy in an historical and cultural context.

“The history of candy in the United States,” she writes, “begins with the Native Americans, although looking at the history books I read as a kid, you’d never know it.”

She explains that various tribes turned corn into candy by boiling or baking it, or letting it ripen in water. They were making maple sugar and syrup long before the settlers. A member of the Lakota tribe whom Benjamin interviews shares a recipe for something called “wasna,” a fruit-sweetened jerky of sorts made from buffalo meat and dried chokecherries. According to Benjamin, the use of fruit for flavor and as a preservative is something that European Americans would later borrow to create an industry of fruit-flavored candy. It’s too bad that it took three readings of a torturous paragraph to glean this fact.

Sugar — beet, cane, maple, molasses, sorghum — is covered in three meandering chapters that trace its origins from Asia to the New World. Topics range from sugarcane and its unsavory connection to slavery, to molasses “pull parties,” in which “European American couples, well-dressed and well-to-do, would pull the candy with lightly buttered fingers.”

We meet Hercules, the slave who served as George Washington’s chef; Rufus Estes, a former slave turned chef and cookbook author; and Mary Bowser, a free African-American who, disguised as a kitchen slave, spied on Jefferson Davis. Their stories are compelling, but Benjamin fails to make a connection between these figures and the book’s central subject — candy — other than to say that the aforementioned people worked in kitchens.

In fact, candy doesn’t actually become the focus of Sweet as Sin until nearly halfway through, when we are finally introduced to names such as Baker, Hershey, Nestle, and Mars. From chocolate, we move on to penny candy, the “great American candy store,” and gum.

Gossipy bits are peppered throughout, some more relevant than others. Clarence Crane, inventor of Lifesavers, was also the father of the poet Hart Crane, who, we learn, drowned at age 33 after falling off a ship. The poet’s death came a year after that of his father, thus sparing the elder Crane “the grief of his son’s death at sea and the irony of his candy being named the ‘Lifesaver.’”

Among the book’s strengths are a series of essays that Benjamin calls “personal perspectives.” These first-person reminiscences come from people Benjamin encountered and interviewed during her research and range from a Mennonite grower of sorghum to the inventor of the Jelly Belly jellybean. Not all of their stories are memorable, but a few are rich in detail and tinged with nostalgia.

When she is decipherable, Benjamin can be incisively funny. Here she is writing about the growing sugar production in the early 20th century: “The Florida sugar industry’s success depended on one factor: dredging useless muck called the ‘Everglades.’” But that’s as far as her criticism goes. There are plenty of failure-to-success and rags-to-riches stories, though for reasons never explained, the West Coast is virtually absent from the scene; not a word about Ghirardelli, See’s Candies, or other western brands.

Toward the end of the book, Benjamin provides brief histories of several iconic (mostly East Coast) candies, including Milk Duds, Circus Peanuts, and the Charleston Chew. The latter, we learn, hails not from Charleston but from Boston and was named for the 1920s dance. The company was launched after a Shakespearean actor named Donley Cross fell from the stage, injuring his back and ending his acting career. The logical next step, writes Benjamin: start a candy company with a friend.

Domenica Marchetti is the author of six books on Italian cooking. Her seventh, Preserving Italy: Canning, Curing, Infusing, and Bottling Italian Flavors and Traditions, will be published in June by Houghton Mifflin Harcourt. Visit her website at www.domenicacooks.com.