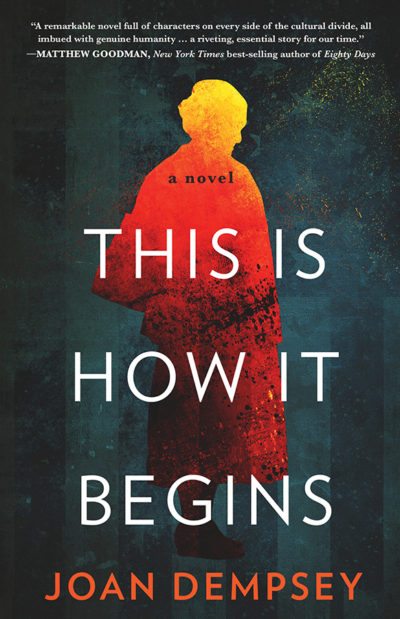 In 2006, a group of students at a small liberal arts college challenged an African-American literature professor with a difficult question: How did the African-American experience in the Civil Rights Movement compare to the ongoing fight for gay rights? The professor reminded them that each movement is its own struggle with particular nuances; he ultimately disapproved of the parallel.

The immediate story of Dempsey’s novel This Is How It Begins revolves around protagonist Ludka Zeilonka’s grandson, Tommy. He is one of several gay teachers who loses his job at a high school when complaints of discrimination are brought forward by Christian students.

On the surface, this story follows Tommy’s legal battle and the controversy surrounding a bill that would give Massachusetts school boards the ability to define “unsavory moral conduct” for themselves, a scenario some fear could allow the conservative community to blur boundaries between church and state.

Decontextualized, Tommy’s story is an oversimplified hot-topic-made-flesh worthy of a Shonda Rhimes show. The story is told through multiple points of view, and central characters are granted the kind of climactic, spot-lit speeches typically written for Meredith Grey or Olivia Pope. These monologues are convincing, if convenient, and they are never subtle.

The true narrative center of the novel, however, is Tommy’s grandmother. Ludka is an immigrant who hid Jews from the Nazis in Poland during World War II, before immigrating to the United States with her husband, Izaac. Even in a new country a lifetime later, Ludka and her family cannot escape the atrocities humans commit against each other, just as Ludka herself cannot escape the memories of war.

Ludka has compartmentalized and concealed these memories, even at the expense of never seeing her homeland again. She has never searched for the loved ones she left behind and she keeps secret (even from Izaac) the Ambroży Mieroszewski portrait of Chopin she rescued from Nazi theft. Now a professor of art history, she tells a favorite student, “You have no choice but to learn to forget. Forgetting means you survive.”

It is immediately apparent, however, that forgetting doesn’t work. The reader’s introduction to Ludka is via a minor dizzying “dissociative episode,” a frequent occurrence in which she becomes disoriented and relives the horrors of her past.

When her husband brings to her attention three deer enjoying a salt lick behind their house, the dead trees in the yard register to Ludka as “so many standing chimneys in a bombed-out city.” Ludka knocks on the glass to scare the deer away and explains, “Too much trust.”

With Ludka’s understandable but irrational paranoia established, the story takes a jarring turn when perceived threats come to fruition: She is contacted by her lost lover’s grandson, leading to the discovery of a difficult secret; the Chopin portrait goes missing; and her home is set on fire when Tommy and his husband are targeted by a conservative group.

Tommy is physically attacked after his termination puts the public eye on his sexual preference, and a nurse approaches Ludka’s son to expresses his support: “Could just as easily have been nurses, any of us, really. People are scared.”

Ludka’s students wonder, awestruck, how Nazi propaganda in the form of Jewish caricature could ever have been taken seriously; chapters later, at a public hearing, the superintendent of schools displays pictures of men dressed for a Pride festival and asks those in attendance if they would want these men teaching their children.

The use of the folk song “We Shall Overcome” at the climax of the story highlights the overlap between Tommy’s struggle and other civil rights issues throughout American history.

In other hands, it is easy to imagine this story as an unwieldy Goldfinch-like brick of a novel. But Dempsey does not succumb to meandering prose or even particularly evocative imagery. The power of the story lies in its parable-like simplicity.

The bill in question and its implications for gay rights could easily have taken the shape of any other hot-button issue; Dempsey could have written about immigration, police brutality, or gentrification, for example, but the thesis is the same.

Viewed through the lens of a woman whose existence is still clouded by the trauma of WWII, an obvious pattern emerges: The atrocities humans commit against each other are never dead and buried. They cycle again and again in different forms, and the inability to recognize this fact facilitates their continuance.

Jordan Millner writes and teaches outside of Washington, DC. Her work has appeared in Kenyon Review Online and Fiction Writers Review.