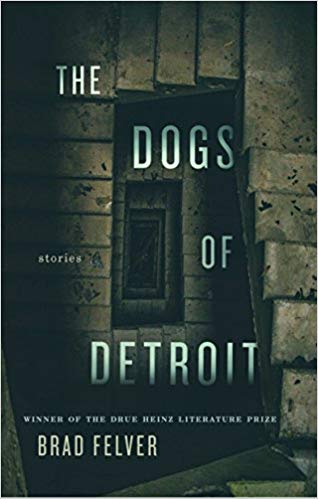 The stories in Brad Felver’s debut collection, The Dogs of Detroit (winner of the 2018 Drue Heinz Literature Prize), are dry ice: cold enough to burn. Most of his characters inhabit burnt-out Rust Belt cities, tapped-out farms, and northeastern urban slums.

Their worldviews and experiences verge on post-apocalyptic, but these stories are far more frightening and grim than run-of-the-mill horror because the author delivers what good fiction can: amplified truth — in this case, vividly imagined and rendered worst-case scenarios that reflect our current world in a very dark mirror.

These can be read as true horror stories, as cautionary tales, or as imagined front-line reporting (sometimes almost surreal and hallucinatory). Brutally honest, Felver explores the effects of emotional and financial scarcity on families. Many of the parents and children on these pages subsist in economic and social circumstances ripe for breeding violence and hatred; many are perpetrators or victims of abuse — and sometimes both at once.

Felver’s characters fight — vicious, no-holds-barred battles. Internal anguish demands release, and inflicting physical wounds on one other — and on oneself — affords some measure of transitory relief. Wreaking harm and self-harm is their reflexive response to being trapped in difficult, dead-end lives. Throwing punches and making bruising contact serves as both intimate engagement and distraction from internal pain.

As the 9-year-old narrator of “Unicorn Stew” says, “We do still need to keep making these bruises.” He and his best friend pride themselves on who has the most and darkest marks. The more the better, since then you can forget whether a certain black bruise comes from a playground bully, a father, or a best friend.

The author enters into the frightened, frightful sensibility of these children with immediacy and empathy. Intentional or unintentional, permanent or temporary, parental absence is an almost universal fact of their existence. Loving attempts are made, sometimes, by a surviving or remaining parent, a teacher, or a friend, but there is a deficit of almost every tangible or intangible resource necessary for nurture. One mother “prays each evening that someday her children will know the taste of ice cream, the scent of muskmelon.”

All of Felver’s stories are searing, but one of the most devastating is “Out of the Bronx.” An adult narrator looks back on his boyhood, remembering such scarcity that there was no sharing, no generosity, no borrowing even a toilet plunger without paying a “rental fee.” His mother had “just sort of vanished from us one day,” retreating in depression to her bedroom; his father worked two shifts.

The narrator’s older brother Roman adapted a lesson from chemistry class into a way for the boys to kill rats in the alley below. “It’s just science,” Roman said. The applied experiment succeeded; the rats exploded. “They scampered and wailed and burned, and we watched, mouths open at what we had done, what we were capable of, each of us feeling some new power that had not existed in the world until that moment, not for us anyway.”

Afterward, the narrator recalled, came anti-climax, and a void. “Now what? So the rats were gone? What would we do now, what would we hate now? What you don’t realize is that hatred is like any other addiction, and when it’s gone, you actually crave it.”

Here and throughout this collection, Felver addresses the evils loose in us and our world, the destructive genies that cannot be put back in any bottle. Reading “Out of the Bronx” close to the anniversary of Hiroshima, I could not help but recall Robert Oppenheimer quoting the Bhagavad Gita upon the implementation of the experiment that was the Manhattan Project: “Now I am become Death, the destroyer of worlds.”

Well, reader, open this book forewarned and forearmed. Although there are among the collection a few quieter stories in which characters in less dire straits grieve natural death, marital separation, or family estrangement, every single one of Felver’s people is in serious trouble, wrestling with suffering — angry, defiant, and, occasionally, laughing.

The Dogs of Detroit is not an easy or light read, but it is prescient and timely given our current political and societal moment of divisiveness, hate-mongering, fear, and anger.