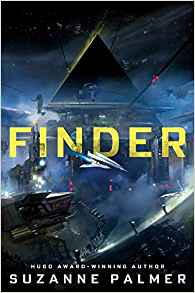 Fergus Ferguson isn't sure how he ended up being the go-to repossessor of stolen goods, but he's really good at what he does. So is Suzanne Palmer, the Hugo Award-winning author of Finder, a fast-paced and funny debut science-fiction novel that just doesn't let up.

Mattie "Mother" Vahn is the first person Fergus meets in Cernekan. The two are kindred spirits accustomed to finding trouble and having it follow them around. Mother Vahn is a lichen farmer who has "far exceeded the typical life expectancy of the junk merchants, rockscrappers, and fugitives that made up the human population near the Gap."

In short order, Mother Vahn acquaints Fergus with the scope of tragedy possible in Cernekan: cracked sunshields, punctured human habitats, messy sewage bots, non-healing suit breaches, and the corrosive effects of the light substitute she smears onto Fergus' hands in the moments after their cable car is attacked.

All that in chapter one. It's wonderful.

In Cernekan, orbit-boosting autorockets keep all the junk is place. Keeping the people in line is far more difficult. Consumables, medical services, politics, and weapons are key to system balance. The people like Arum Gilger who do the balancing are dubious characters. Cernekan's well-ordered chaos constantly is at risk of turning into open conflict.

Taking away a powerful person's prized ship, as Fergus has promised to do, runs far too much risk of tipping the whole system off-balance. The difficulty of Fergus' job is compounded by his inability to go unnoticed. As the only tall, thin, bearded redhead around with skin the color of dead fish, Fergus often gets "that itchy-back feeling of being too conspicuous immediately."

Soon, Fergus is asking himself if a man can be both uncomfortable and dead. He figures he must be alive because he's being interrogated at the lichen farm by Mother Vahn's clones. The angriest of them is teenaged Mari Vahn, with her near-permanent look of "someone contemplating the joys of immediate violence."

Despite his best intentions to focus on taking back Venetia's Sword, Fergus can't shake the urge to help Mother Vahn's clones. He also can't free himself from the unwanted assistance of Mari Vahn or the amused attention of the regional weapons dealer Mr. Harcourt, who is allied with the Vahns in the Wheel Collective.

Mr. Harcourt thinks Fergus' plans to repossess Venetia's Sword are so stupid they just might work. Mari Vahn feels differently. She tells Fergus she knows ahead of time how she will feel about whatever he has in mind: "I won't like it, because I don't like you."

Mari can be forgiven for her disbelief in Fergus' ship-retrieval schemes, like his Light Afterimage Retrieval Device, a non-invention with an acronym that matters. Fergus' tale is filled with examples of his humor making things worse, usually when he is tied up and unable to defend himself from physical blows.

Finder's minor characters are just as interesting as the major ones. The Governor's enforcer, Katra, is "built like a tank, if tanks were constructed entirely of muscle and disapproval." Bor Graf, a Faither who believes clones are soulless abominations, comes from Luceatos, a "Faither penitent colony that believed redemption could only come through death for a righteous or glorious cause."

In a slice of perfect description, milling guards left outside a conference room are part of "a growing collection of surly, abandoned minionry."

The human characters in Finder are all knowable; the non-human Asiig remain a mystery. They keep things interesting and even more dangerous in Cernekan with sporadic flybys that may or may not result in people being kidnapped and returned in pieces or with new, mysterious parts and powers. Asiig flybys send humans scuttling to space-based, shelter-in-place hideaways. It's a safe bet that the aliens will show up at just the wrong moment.

Finder is a joy for lovers of lightning-fast plots and engaging reads. Palmer's novel has the pop of military science fiction without the uniforms or the chain of command. She has a gift for creating interesting characters and a fully realized world. Finder is an impressive debut.