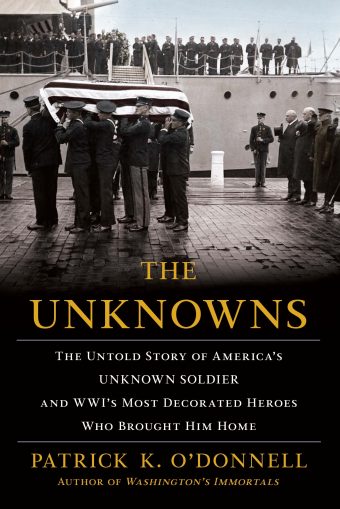 True to form, military and combat historian Patrick K. O’Donnell, in The Unknowns, has unearthed the stirring story of World War I’s Unknown Soldier. Rather than present a simple tale of the chosen body’s selection process, though, O’Donnell peels back multiple layers of WWI, shining the light on a larger cast of characters who participated in the return of the unidentified remains to American soil.

Sergeant Edward Younger — who personally selected the Unknown Soldier — and the other eight men whose duty it was to serve as body-bearers for the nameless deceased’s journey to the United States, were all men who had performed heroically during the war. They were hand-picked by commander of the American Expeditionary Force, General John Jay “Black Jack” Pershing. In this book, the conceit of viewing the war through their eyes works magnificently.

The mastery of O’Donnell’s writing is that he can bring together myriad themes and make them work together. The stories of body-bearers James Dell, Samuel Woodfill, Earnest Jansen, Charles Leo O’Connor, Thomas D. Saunders, Louis Razga, Harry Taylor, and James Delany would have been lost to the dustbin of history were it not for O’Donnell’s eye for detail and exacting research.

Because of O’Donnell’s intimate work as a combat writer embedded with American forces in Iraq, his writing enjoys an air of authenticity. When machine guns shred dozens of men, it feels like you’re witnessing it. When poison gas is used, readers can sense the urgency of soldiers getting into their gas masks. And when American doughboys go “over the top,” the narrative pulses with a kind of violent verve.

In many ways, this book is an homage to all the American servicemen who fought in the Great War. But the saga of the Unknown Soldier is represented more specifically by the stories of courage displayed by Younger and the body-bearers.

One of them is an American Indian who singlehandedly captures 63 German prisoners; another is a cowboy who, in his own way, recreates a one-man Charge of the Light Brigade. In each instance of individual valor, readers recognize the awful carnage of the Western Front. It is shell-ridden and pockmarked with shattered buildings; its fertile fields and woods are literally killing grounds.

Of particular interest are the author’s tales of the U.S. Marines who fought with such heroism at Belleau Wood. The Germans called them “Devil Dogs,” and it’s no wonder that a generation later, during World War II, the Germans were particularly afraid that the Allied forces deployed in the European Theatre would be Marines.

Like all good storytellers, O’Donnell has stood where these events took place, which pays dividends for the reader as the immediacy of each combat moment is captured by vivid descriptions of where it occurred.

The author is also quick to examine larger issues of the war, particularly its mechanization via the use of tanks, airplanes, and powerful new guns. In many ways, this is a book of combat sounds.

And O’Donnell does not shy away from the role of military politics, either, recounting how the French stubbornly sought to integrate American forces into its own forces, only to repeatedly be rebuffed by Pershing, who was under direct orders from President Woodrow Wilson to maintain an independent command.

Concluding his book with the moving rite of interring the Unknown Soldier at Arlington National Cemetery in Washington, DC, the author depicts a sober and solemn ceremony that has come to represent America’s honoring of all its anonymous war dead. With The Unknowns, Patrick O’Donnell has added immeasurably to the growing literature of the American role in World War I. It is a simultaneously riveting and soulful work that should not be missed.

James A. Percoco is a nationally recognized history educator and serves as teacher-in-residence for the American Battlefield Trust.