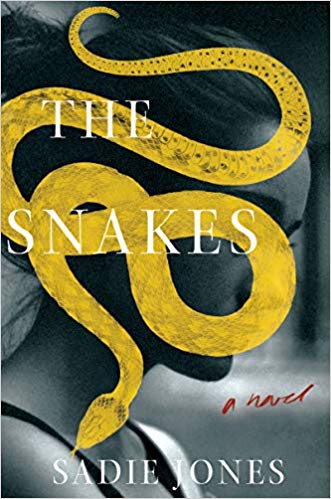 The Snakes slithered through the mail slot, unsolicited and unexpected. Packing for a solo writing retreat, I read the jacket copy. A family drama about a woman trying to be good in the evil, modern world, set in France and London, sounded just right for my retreat reading. I put it in my bag.

Perhaps if I had read Sadie Jones’ prior four novels, I would have expected a rollercoaster read. I might even have decided not to take the book for dark nights alone in the country. As a child, I had to leave scary books outside my bedroom door at night.

I’m still that kind of reader. But I’ve also always been the reader who can’t put down a well-written, terrifying book. Truman Capote’s In Cold Blood appeared in the New Yorker when I was 12. It was way over my violence threshold. I shouldn’t have read it.

I read it secretly, glued to the page by fear.

The Snakes begins quietly with a young couple in present-day, gentrified North London. Bea is a social worker, her aspiring artist husband, Dan, a reluctant realtor. They’re managing to get by. Bea is content, but Dan is dissatisfied. She is the daughter of new-money parents but has cut herself off from their megafortune.

Marrying Dan, who is biracial and grew up poor, she chose an outsider over her family milieu. He doesn’t understand why she abhors her parents, especially her mother, nor why she rejects their money. The couple and Bea’s family are painted vividly, albeit, at first, with broad strokes: good and bad, poor and rich. Bea is in the tradition of a plain princess, a poor little rich girl. But complications and nuance develop over the course of the novel.

Bea, an accidental third child, has two brothers. She and brother Alex (nine years older) have a special bond. He’s a recovering drug addict, trying to run a hotel in France purchased for him by their parents. To remedy Dan’s discontent, the couple decide to take three months off to travel, which they can just afford thanks to their modest “cushion” of careful savings.

They start the trip with a visit to Alex and find his hotel is crumbling and isolated, with a nest of poisonous snakes in the attic. Unexpectedly, Bea’s parents arrive, and the hotel becomes a perfect melodramatic setting for an unwelcome reunion.

The shocking degree of the family’s dysfunction is gradually revealed to the reader, but Dan remains oblivious and is increasingly tempted by Bea’s spurned fortune. Even Bea begins to yearn to be able to afford a child and a house, and to imagine the broader possibilities of doing good with the money:

“It wasn’t the love of money that was the root of all evil, only the love of it above other things. Like fire, it could be a good servant. If she could be disciplined, not be seduced, or let it master her. If she were vigilant, and did not let it rule her…Why should the corrupt have a monopoly on wealth when the world needed it so badly? She had trained and worked to give something to the world, but she made so little difference. She was a good person. She could help. She didn’t believe it could be wrong. She dared imagine justice.”

However, the indelible curse of tainted money creates danger far greater than the internal threats of the destructive family’s poisoned relationships. The novel’s pace shifts from psychodrama into the high gear of suspense and mystery, complete with police-car chases. It’s no longer just an internal, existential threat that Bea faces. The world beyond the hotel poses extreme and imminent danger.

The dramatic story is irresistible and un-put-downable, even for a white-knuckle reader. I read fast and continuously, eager to get the horror of what seemed to be coming over with. Relieved to finish, I didn’t re-read as I often do when reviewing a book. I couldn’t bear to.

After I put The Snakes down (and tried not to think of it), another book about the problem of being a good person, and a person of good fortune, came to mind: The Needle’s Eye by Margaret Drabble. Returning home from my writing retreat, I found it on my bookshelf.

Drabble’s novel appeared and takes place in the early 1970s. The protagonist is another London heiress, another plain princess, another poor little rich girl who yearns to be and do good despite the stain of her riches. Unlike Jones’ Bea, Drabble’s Rose views herself and her fortunate dilemma with rue and humor, and the tone of Drabble’s novel is funny as well as poignant.

Rose has worried since childhood about the problem of her riches, as she tells Simon, a puzzled admirer. Trying to explain her choice to give away her fortune and live in a poor North London neighborhood, Rose says she was a very religious child, perhaps because of her nanny:

“She had a dreadful effect on me…very puritanical…Why nobody stopped her corrupting me I can’t imagine. They probably never noticed. Anyway, she used to nag me endlessly about the family’s money and my father’s wickedness in being so rich…and I just used to listen and take it. And one day when she took me to church, the sermon was about that text that says it’s easier for camels to get through needles’ eyes than for rich people to get into the kingdom of heaven…to me it was like…a horribly heavenly light shone upon me and I knew what life was like, endless prevarication and shuffling and squeezing and self-excusing and trying to cram oneself into grace without losing anything on the way.”

Like Bea, Rose eschews wealth and defies her father. And when she marries a poor outsider — Greek immigrant Christopher Vassilou — her father disinherits her. Now, she has not seen her parents in more than a decade, although her ex-husband has become almost a son to them, taking the money and the place she abdicated, visiting his in-laws often with the couple’s three children.

Despite her father’s efforts, and despite her own attempts to renounce wealth, considerable irrevocable trust funds attach to Rose. Initially, she gives almost all of it away by founding a school in Africa, but more will come due. The school proves a futile and tragic gesture; it burns to the ground and children perish.

Rose has discovered there are riches she is not willing to renounce: her children. Christopher is wrangling for custody, citing her mental status as grounds, evidenced by the giving away of her money and her choosing to live in shabby (then, not now!) North London. He’s abducted the children. Searching, Rose stealthily returns to her parents’ estate as a paying guest on the day of their annual open house for charity.

As in The Snakes, this is an unwished for, uncomfortable reunion. Here, the pain remains in the realm of interpersonal conflict. The novel is thrilling if you are interested in families, but it never becomes a thriller. Eventually, a tentative, provisional resolution is reached. In Drabble’s story, good and bad are not absolute qualities, and character traits are not absolutely immutable; her people are customary hybrids capable of change.

So, two novels written a half-century apart treat the same theme: Money corrupts and sticks like glue. The two books might almost be opposite sides of the same coin. Jones’ novel is tragic. Bea is constrained by circumstances and evil reminiscent of the vengeful fate of Greek classics, the eternal punishments of Dante.

For Drabble’s Rose, impoverishing herself and doing good on a large scale proves impossible. This is a fable or fairytale in a minor key. Rose doesn’t live happily ever after, but she does accept that moments of elusive grace and ordinary, personal good works may have to be good enough. She both changes and remains the same.

These similarities and differences in the novels reflect authorial sensibility and each author’s response to a particular moment in time. The Snakes is a dystopian, apocalyptic tragedy; the author says she was prompted by the abundant evil of our current era. The Needle’s Eye was written almost 50 years ago during another greedy era (has there ever been an epoch that wasn’t?), but perhaps a time more leavened by hope than the present.

I wish Jones and Drabble could sit in conversation with each other and I could eavesdrop. Both succeed at the challenging task of writing about a good person who is interesting and difficult. Both novels are well suited to this moment. The Needle’s Eye has stood the test of time and re-reading for me. I am not brave enough to re-read The Snakes, but don’t let my cowardice stop you.

Ellen Prentiss Campbell is the author of The Bowl with Gold Seams (Apprentice House Press, 2016, Indie Excellence Award in Historical Fiction). Her story collection Contents Under Pressure (Broadkill Press, 2016) was nominated for the National Book Award. A new collection, Known by Heart, is forthcoming in 2020 from Apprentice House Press, and she is at work on a novel. A past fellow of the Virginia Center for Creative Arts, Campbell received her MFA from Bennington. She lives in Washington, DC, and Manns Choice, Pennsylvania.