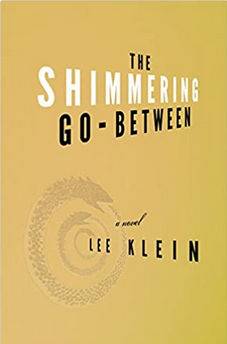 By the time a book is in galley form and sent out for review, there is almost always a synopsis on Amazon or Edelweiss that describes the plot. For The Shimmering Go-Between, Lee Klein’s debut novel, there is nothing.

This appears to be intentional, since on the book jacket itself there are two head-scratching statements: “It’s best not to reveal too much” and “All we can say is: please no spoilers.” This leaves the reviewer in a bit of a bind. One presumes that Klein wants people to read his novel, so how does he suggest enticing them to do so?

The title is from a quote by Vladimir Nabokov: “Between the wolf in the tall grass and the wolf in the tall tale, there is a shimmering go-between.” Indeed, this book is one long collision between normal, everyday life — sprinkled as it is with familiar heartache and tragedy — and eye-popping, alternate-universe fairy tale.

We meet Dolores when she is 12 and still undeveloped, but taking advantage of her brother’s pornography collection while she heals from a bad fall from her bike. It’s not a great summer, and it turns worse when she starts feeling oddly nauseated and notices that her stomach is distended. Doctor visits and blood tests reveal the answer: Dolores suffers from parthenogenesis (the development of an egg without fertilization).

Perhaps more devastating, she suffers from parents who don’t believe her when she insists that she is truly untouched. After three consecutive terminated “episodes,” she’s put on birth control, and the matter is never discussed again. Perhaps that’s a spoiler, but since it all happens by page 15, there are plenty more surprises to come.

(And just an FYI to the author: The Immaculate Conception refers not to the Virgin Mary’s conceiving a child without benefit of insemination, but rather to her own conception free from the stain of original sin. It’s a common — ahem — misconception.)

Dolores’ condition and history isolate her, and she keeps herself deliberately separate from her peers. She makes it almost through college before finally allowing herself to be wooed by a young politician named Max, who has nice eyes and a beard.

If Dolores as a virgin is hyper-fertile, Dolores having sex with a bearded man has all sorts of unimaginable outcomes that raise thorny moral issues that reverberate throughout the book, and that Klein and his characters sometimes notice, but on which they take no particular position.

The outcome of her and Max’s college affair sets the stage for another long stretch of determined isolation during which Dolores throws herself into her editorial work at National Geriatrics. Eventually, though, she admits to being smitten by her best friend at work, a widower named Wilson whom she describes as tall, kind, and — could it be otherwise? — bearded.

It turns out that Wilson is the heart of the story in many ways and on several levels. We get to know both him and his late wife, Rue, more fully than we do Dolores, who almost becomes a secondary character later in the book. Eight years on, Wilson is still quietly mourning Rue’s sudden death from a collision with a deer; five seconds earlier or later would have made all the difference.

But that type of “if only”randomness is universal. In the sublimely alternate worlds that Dolores, Wilson, and Rue experience, it’s not just that the universe is random, it’s as though any possibility of true choice is removed from the equation. Virtually no consequence is the result of a character’s freely elected choice or action.

Wilson’s free will is so compromised that he is controlled by not one, but two occupying and competing forces. His one personal choice is to cultivate a unique sexual talent that he shares with paying subscribers through his website; he can hardly be expected to anticipate the consequences when that talent marries with the product of his blackmail-induced assignation with Dolores. By the time we figure out who is actually narrating the story, the pressure is building toward explosions both personal and widespread.

In a story like this, in which the author introduces multiple levels of reality that demand his readers’ trust and willingness to go along for the ride, it’s imperative that the reality we’re familiar with be utterly believable. Thus, after years of consciously isolating herself for fear of what results from intimate contact, it makes no plausible sense that Dolores’ first gambit to re-enter the world is to blackmail her friend — the man she fantasizes about spending a normal life with — into having sex with her.

Even more unbelievable, we never hear her consider the probable outcome, based on her past history. He has a beard, for heaven’s sake! How can she possibly be caught unawares? There are several such elements that just don’t feel true when they really need to.

Dialogue is not Klein’s strong suit, but his prose is sometimes captivating. Outside of Wilson, Rue, and Dolores — it’s a lovely detail that Wilson surrounds himself with women whose names mean sorrow — the other characters are there merely as plot devices.

Klein’s sketches, which are sprinkled throughout to illustrate apparently random narrative components, have a quirky charm. He compares his story to those of George Saunders and Charlie Kaufman, and it’s easy to see the same meta-ness here as in, say, “Being John Malkovich.” Because of that, fans of Saunders’ fiction and Kaufman’s films will probably appreciate this tale that goes between the reality we know and onto other ones that just haven’t broken through yet.