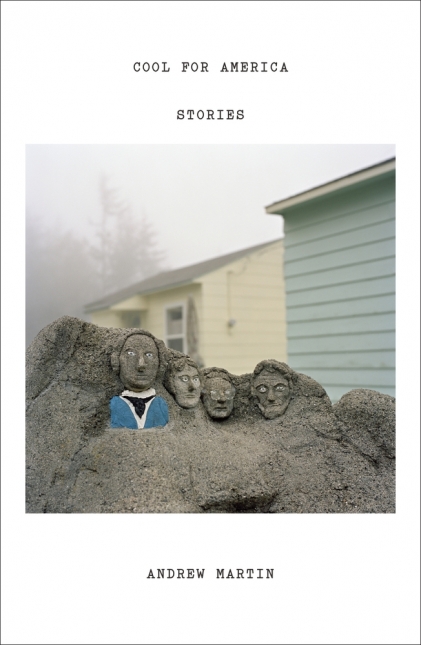 Like his debut novel, Early Work, narrated in a tone that commands a delicate blend of irony and sincerity, Andrew Martin’s second book, Cool for America, a collection of 11 loosely connected stories, contains wryly directionless characters grappling with the ambivalence within ambition. Struggling to establish themselves, they become ever more lost, more frustrated and confounded, as if stuck in quicksand and moving frantically to save themselves.

It’s a dilemma that leaves many of them momentarily paralyzed. Leslie, whom readers may remember from Early Work, appears again at center stage in the opening story, “No Cops.” At 27, she is described as “mostly mood, and only a little bit of person,” and has difficulty confronting her ability to simultaneously “exist in the world of realistic expectations and fulfill the expectations she had for herself, expectations she had barely allowed herself to admit that she possessed.”

Though these stories follow aspiring and often stagnant artists of varying type, what ails these artists is universal trepidation. Leslie’s reluctance to recognize her aspirations emerges from a fear of failure, a fear Martin weaves through every story to illustrate how much more detrimental fear is compared to failure, its dubious counterpart.

The author understands the intimacy a narrator’s self-disclosure can create with a reader and, sprawling and unencumbered, how great a distance a paragraph or even a single sentence can cover. His characters are at once affable and distraught, a polarity that grants each story an enticing tension. Here is the first paragraph of “With the Christopher Kids,” a tale of two adult siblings taking holiday indulgence to irresponsible levels:

“On Christmas Eve I wandered around my mother’s house looking for things to wrap. For the last three days I’d been slamming doors and doing cocaine and forgetting that it was the season of giving, nominally because my girlfriend Melanie had left me hours before our trip north to visit our respective families. If I was being fair — which I wasn’t — Melanie’s decision made sense: Why wait until after the holiday disasters to sever ties? It is one less thing to hold against each other forever. Downstairs, my sister Patricia hollered for scissors.”

What at first appears to be satirical winces — with distress below the surface, like a pained smile flashed before the tears come — reveals itself, instead, to be a hollow self-defense that provokes sympathy.

This is true also of the depth Martin gives his stories. For instance, what might seem a simple recounting of two families vacationing on the Jersey Shore, as in “The Charged Party,” becomes one man’s reckoning with his own marital unhappiness: “But this was before I understood that going through these problems again and again…was the worst kind of complacency, a refusal to take responsibility for our own unhappiness.”

Sometimes, one is aloof to one’s misery; other times, one is steeped in it. In the book’s title story, the unnamed narrator ruptures his tibia playing soccer and is forced to spend the rest of the summer on his couch, at the mercy of friends’ voluntary assistance. One of his aides is a colleague’s wife, whom the narrator is drawn to, feeling as though the pursuit of this unavailable woman could quench his thirst for the carnal passion he’s otherwise, being injured, unable to pursue. The story becomes a taut, suspenseful tale as the unlikely lovers try concealing their attraction from those around them.

Martin’s strongest story in the collection might be “Attention,” in which all of his considerable skill — his humor, his honest dialogue, his empathy — is on potent display. The story follows Cassie, who, at 32, is suddenly engulfed by childhood memories, recollections that come to her sporadically, the way memory often does, creating a sense of beatific satisfaction at having lived such a fine moment and a sad awareness of the moment having passed.

Between the fragmented flashbacks, Cassie maintains a job she worries she might soon be fired from and holds, like so many of us, contempt for the current state of American politics. She ponders the possibility that maybe:

“[H]er recent preoccupation with her childhood was a sign that things really were coming to an end, that it was her animal body’s way of telling her that the only thing left to do was remember, because there would be no future for her or her friends.”

This worry emerges not from personal impediments but from “the president and his cabal of monsters” she fears will bring the country to “war and that she’d be dragged screaming and vomiting through the streets by the police at the next protest she attended.”

Martin’s most astonishing power is his ability to sublimate a character’s internal frustrations into an external representation of reality — a cathartic, frequently amusing projection of the self onto the world’s brutal canvas. As he writes of a character in one story: “She understood that the things of the world had weight and force, and that she did, too, and that, in combination, this could pose problems.”

Maybe there isn’t any way to make sense of such problems, but at least we try. We have to, for the world would make even less sense if we didn’t.