The President Will See You Now: My Stories and Lessons from Ronald Reagan’s Final Years

A worshipful ode to the Gipper from his private secretary 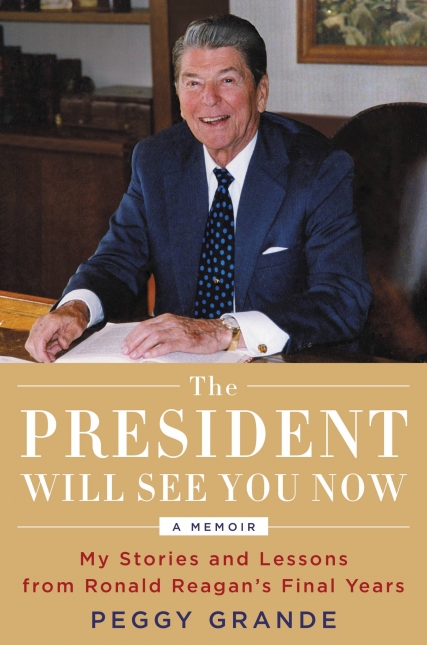 I picked up The President Will See You Now, a memoir by Peggy Grande of her 10 years with Ronald Reagan after he left the White House in 1989, with misgivings. Since that time, more than 500 biographies and staff memoirs of Reagan have been published, in addition to his own autobiography and 15 volumes of his Presidential Papers.

There is also the Ronald Reagan Legacy Project, which works to place a monument or memorial to the former president in every state, and, to date, has established Reagan landmarks in 38 of them. The next stated goal is to place a public building named after Reagan in the 3,140 counties in the U.S., proving, if nothing else, a continuing commitment to the Gipper.

At one time, I, too, was fascinated by all things Reagan and researched the subject thoroughly to write Nancy Reagan: The Unauthorized Biography, a 1991 book featured on the covers of Time and Newsweek. Some people, particularly the Reagans, who held a press conference to denounce the book, felt it was too critical of the former first lady, although I gave her full marks for making possible all of her husband’s stunning success.

So, I did not come to Grande’s memoir without interest. Truth to tell, I was seduced by her rationale for writing the book. She said she couldn’t shake a passing comment from a colleague: “If there was a woman who sat outside Abraham Lincoln’s office every day for ten years, don’t you think we would want to know what she saw? And wouldn’t she owe that to history?”

I was all in and wanted to know about the last decade of Reagan’s life, when Alzheimer’s began robbing him of his golden ability to communicate.

The most poignant recollection in the book comes when the author, who writes worshipfully of her boss, recounts the first time she knew something was wrong. She had escorted a group of visitors in to see the former president in his Los Angeles office, and he began telling his pony story but could not remember the punchline.

Anyone familiar with Reagan lore knows about the pony. It was an old chestnut the president had polished to perfection and told so often that staffers knew every word by heart: A father had two sons — one exceedingly pessimistic, the other eternally optimistic. The father locks the pessimist in a room full of toys, convinced the youngster will jump for joy. Instead, the little boy cries because he says the toys will eventually break. The optimist is locked in a room piled high with horse manure, which the father feels sure will elicit yowls of complaint. But the youngster laughs with glee and starts digging. “With all this manure, there has to be a pony in here somewhere.”

Five years into his retirement, the former president could no longer find his pony. After he visited the Mayo Clinic and received his dreadful diagnosis, the buoyant man who always saw “Morning in America” announced that he was entering the dark shadows of the Alzheimer’s disease that would finally claim him in 2004.

Grande writes with knee-bending reverence for Reagan, but she circles Nancy with the kind of arms-length respect one reserves for a tiger. This is the point in her story where the author could have heaped praise on the former first lady as she began her campaign to expand stem-cell research into the disease that was taking her husband.

In 2004, Nancy Reagan put herself at odds with her own political party to publicly oppose President George W. Bush’s policies, which limited federal funding to stem-cell colonies created before August 2001. She joined Michael J. Fox and helped raise $2 million for stem-cell research into Parkinson’s and Alzheimer’s. She lobbied members of Congress to revive legislation to expand federal funding.

At the age of 86, looking frail but sounding firm, she continued speaking out. “There are so many diseases that can be cured or at least helped,” she said. In 2009, she praised President Obama for overturning the restrictive Bush policy. “We owe it to ourselves and our children to do everything in our power to find cures for these diseases.”

It’s puzzling not to applaud Mrs. Reagan’s efforts to find a cure for the disease that killed her husband, whom the author describes with all the genuflecting adjectives of an adoring acolyte. In another glaring omission, she writes that “the Reagans loved children,” and, trying to prove her point, she includes many photographs of her own children visiting the president and first lady at their home in Bel Air, where she tells us the president frequently wore a “striped matching pajama set and white monogrammed RWR robe with leather slippers.”

Yet her book, which purports to chronicle the president’s last years, makes no mention of the Reagans’ own children or grandchildren. She cites no visits, no phone calls, no letters, no emails. She does not even acknowledge the death of the president’s eldest child (with first wife Jane Wyman), Maureen Reagan, 60, in 2001, three years before the president died.

That the Reagans put their marriage before their children will come as no surprise, but that they substituted staff for family, as Grande writes, seems such a sad ending to a book that proposed to pay a debt to history.

Tiger Girl and the Candy Kid