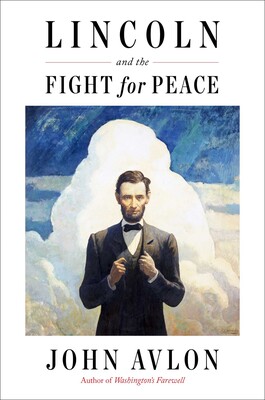 John Avlon’s Lincoln and the Fight for Peace is a powerful, sublimely written analysis of Abraham Lincoln’s unfulfilled post-Civil War plans for reunification and how the legacy of those plans still echoes around the globe. In this way, it is not a traditional historical narrative but rather speculative and aspirational.

After the guns fell silent at Appomattox Court House and Robert E. Lee signed the terms of surrender, his rival and again countryman Ulysses S. Grant shook his hand and said, “Let us have peace.” Lee was grateful that the terms of surrender were generous. (Confederate officers could keep their sidearms and soldiers their horses.) They could be summed up by the phrase Lincoln uttered to his field commanders when the South’s capitulation seemed inevitable: “Let em up easy.”

At heart, Lincoln was a man of peace, and an enduring question in American history remains how different our nation might look had he lived to manage Reconstruction and post-Civil War society. Avlon speculates brilliantly via a careful analysis of Lincoln’s persona and a day-by-day account of the president’s final weeks.

Among other things, Avlon explores the fact that, while war yet raged, Lincoln was nevertheless looking for ways to broker a peace that would end both the fighting and the institution of slavery. This desire — and ability — to merge compassion with political acumen showed Lincoln to be a singular kind of leader. In his assessment of the man, the author provides a glimpse of how we might use Lincoln’s example to navigate our way out of our current crises of “us” versus “them.” For Lincoln, it was always about us. All of us.

Divided into six sections, Lincoln and the Fight for Peace traces how the chief executive’s plan for reunification would have looked had he not been felled by an assassin’s bullet. While none of the information is new, Avlon’s narrative flair brings immediacy to the topic. Thus, in his hands, Lincoln becomes the ultimate peacemaker, embodying political shrewdness and benevolent compassion.

After offering a thorough evaluation and rendering of Lincoln’s Second Inaugural — a political Sermon on the Mount that Frederick Douglass called “a sacred effort” — Avlon recounts for readers Lincoln’s close communication with his generals as the war neared its conclusion. When Richmond fell, he visited the fallen Confederate capital not with words of vengeance dripping from his lips, but rather holding the hand of his 12-year-old son, Tad. We see in Lincoln a man whose heart was filled with empathy for the newly freed enslaved people and the vanquished Confederates alike.

To Avlon, Lincoln’s only real misstep was in choosing Andrew Johnson — a Southern Democrat who he hoped might conciliate the Confederacy — as his running mate in 1864. In doing so, the commander-in-chief failed to consider the character of the man who would replace him. Johnson, a white supremacist, was an embittered soul who lacked sympathy for freedmen and supported the South’s implementation of the Black Codes that would form the foundation of Jim Crow. His legacy is one of shame.

To illuminate Lincoln’s far-reaching influence, the author goes on to outline how subsequent leaders looked to his example. This includes the adoption by many nations in the late 19th century of the Lieber Code — a codification of the rules of warfare signed by Lincoln in 1863 — which would eventually provide a framework for the Nuremberg Trials. It also includes the United States’ approach to rebuilding post-WWII Europe and Asia. Ironically, what largely failed in America worked remarkably well in Japan and Germany; both countries became models of the kind of liberal democracy Lincoln envisioned.

To move beyond our present polarization, Avlon encourages us to look to Lincoln the same way leaders from Gandhi and Mandela to Pope Francis have done. As they all understood, Lincoln’s greatness as a ruler came from his genuineness as a person. His enduring belief in the power of love and charity to move humanity forward is a legacy that belongs not just to the United States but to the world.

James A. Percoco is history chair at Loudoun School for Advanced Studies in Ashburn, Virginia, and the author of Summers with Lincoln: Looking for the Man in the Monuments (2008). A member of the National Teachers Hall of Fame, his current book project is Final Words: Discovering America’s Literary Legacy in the Nation’s Graveyards.