Moving away from oppression one mile at a time. 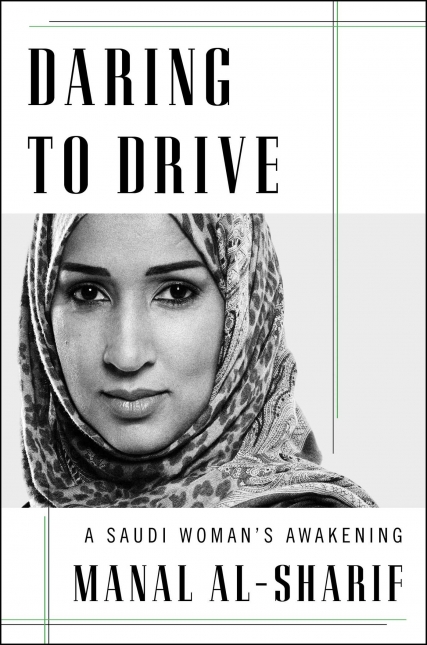 Manal al-Sharif separated herself from the nameless masses of Middle Eastern women we in the West imagine to be oppressed — and stupid and soulless because of it — in 2011 when she spearheaded a social-media movement urging Saudi women to defy convention and drive, their own sort of Arab Spring.

This act of rebellion and the time she spent in horrific conditions in jail without trial for “driving while female” form the climax of Daring to Drive, which is written in a simple, straightforward style that is compelling because of it.

We are told in the acknowledgements that al-Sharif’s first inclination, coming from a “private culture” as she does, was to present a dry, technical history of the Women2Drive movement. We are certainly indebted to her agents from our tabloid tell-all culture who gently but firmly told her she needed to instead tell a personal story.

I hope, however, that this inspired choice and the editorial decision of the subtitle, “A Saudi Woman’s Awakening,” with its suggestion that Saudi women are the only ones in need of a wake-up call, does not lead readers to smugness and the feeling that all is right in the Western world.

Al-Sharif gazes at us from the book’s cover in quiet confidence, her face a record of earlier triumphs. She tells us how she refused the American marketing department’s suggestion to Photoshop away the scar she received during a childhood of brutal physical violence and poverty in the holy city of Mecca.

Our usual exposure to Saudi constraints focuses on the lives of princesses. How much greater the oppression of the denial of education when the life is poverty, of playing outside when the inside is an apartment of a few bare rooms, when the father’s self-respect is corroded by his own lack of education and scramble to make a living.

Al-Sharif’s mother gave birth to her second daughter on the rugs of their tiny apartment unattended because she could not leave, and no man was available to drive her to the hospital. This is the mother who insisted her daughters as well as her sons have access to education, yet their childhoods were hardly identical.

The author describes her circumcision at the age of 8, an act of violence that nearly killed her, but which she also used as a point of power to refuse the suitors her father wanted to choose for her not much later in life.

Against terrific odds and obstacles that only make her stronger, al-Sharif gets her degree and goes to work in the all-male Aramco IT department. IT in Silicon Valley is notoriously male-dominated and female-hostile; Saudi corporations don’t have a corner on it, nor do they alone stand in need of reform. The Saudi Aramco compound offers swimming pools, no dress restrictions for foreign workers, and roads women can drive on, but a Saudi woman cannot live there alone.

Al-Sharif’s job takes her for a year to the U.S., where she first learns to drive and gets a license. She has the perspective to help us see that the only media she can get in the West has a certain one-sided view — and that perhaps the necessity of having a car, the torture of a long commute, and the damage to the environment may be its own sort of slavery.

Even when she is in prison, al-Sharif chooses the path of liberation, compassionately hearing the stories of her cellmates, many of them foreign women in menial jobs who do not have her hope of friends on the outside who may care for her child and work for her release. Are not U.S. prisons also a scandal when it comes to dealing with minorities and mothers?

Al-Sharif tells the story that first made her determined to drive: about the night she was stuck outside the Aramco compound without public transportation or a male driver and the threats she felt from the hostile male world around her. What woman in America, even with her driver’s license and her locked car, does not think twice about where she will drive, where she will park, where she will walk at night, her keys forming a defensive brass knuckle in her hand?

We can all learn from al-Sharif’s courage and strength; I hope we are the ones who can awaken.

Ann Chamberlin is the international-bestselling author of 20 books, most of them historical novels set in the Middle East. She has also published a work of nonfiction on the history of women’s seclusion in the Middle East. She works part time at the University of Utah's Middle East library, where she transliterates Arabic and Hebrew. She worked on the excavation of Tel Sheva in the Negev Desert and has written numerous plays produced nationally and internationally.