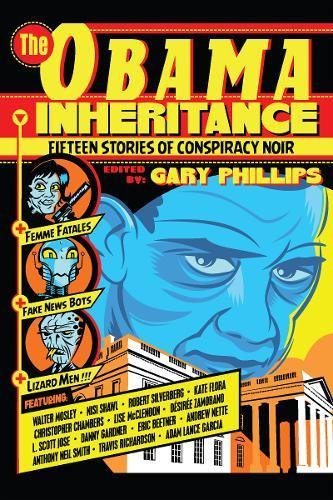 If the political upheavals of the last 18 months seem so surreal that you sometimes wonder if you’ve woken up in a funhouse-mirror world in which the Ministry of Truthiness is staffed by the Keystone Kops, you may be ready to plunge into the alt-historical sci-fi fantasies in this snarky anthology exploring Life After Obama.

In an era when some still believe in the “birther” myth, Obamacare “death panels,” and “Pizzagate,” it may seem that today’s reality is so bizarre that satire is simply de trop. But satire is not what editor Gary Phillips offers in The Obama Inheritance.

Instead, he and his collaborators present 15 stories that offer the dubious consolations of imagining either that, below the surface of events, things might be less hopeless than they seem — or, conversely, that they could be even worse. While these tales may be wanting as literature, they do succeed as a kind of “laugh, clown, laugh” approach to trauma therapy.

A motif that recurs in several stories is the revelation that our 44th president even now is engaged in a guerrilla struggle against the regnant evil. Phillips paints Barack Obama in this heroic light in his own contribution to the anthology, “Thus Strikes the Black Pimpernel.”

In a similar vein, the former first lady dons battle gear in Kate Flora’s “Michelle in Hot Water” as leader of an all-female commando team whose nighttime derring-do is aimed at cutting Big Pharma down to size.

More than once, the former president turns out to be an actual alien who has come to earth to lead humanity to a higher level. In “…The Continuing Mission,” by Adam Lance Garcia, he appears as a logic-chopping Vulcan-like starship science officer sent to the past in what turns out to be a long-term mission to thwart efforts by Klingon-like enemies to tamper with the timeline. It is clearly no coincidence that the Klingonite vessel the crew encounters is notable for its obscene opulence and lavish use of gold trimmings.

Other stories explore darker sequels to the election that brought the 45th president to power. “Brother’s Keeper,” by Danny Gardner, describes a grimy, militarized, dehumanized future in which the Trump dynasty keeps the proles quiescent with the help of a propaganda apparatus worthy of Orwell’s 1984.

An even more literal dehumanization is the subject of “The Psalm of Bo,” by Christopher Chambers, whose premise is that the global discord engendered by the evil reign of MAGA (“Make America Great Again”) has led to a nuclear apocalypse, the destruction of most of humanity, and the subsequent rise of newly conscious, newly articulate, and newly weaponized canines, who continue the fight against MAGA under the leadership of Bo, whom some readers may remember as the Obamas’ dog.

A few of the stories, including some of the best, simply treat the reader to a hearty laugh at the credulity of ignoramuses who fell for the “fake news” peddled by organs of the alt-right and Russian bots.

“I Know They’re in There!” by Travis Richardson, is a hilarious yarn about a rube who leads a small team of pathetic losers who assault a country hospital in eastern Oklahoma demanding to confront the “death panel” face to face.

It’s popcorn fiction, to be sure, more gestural therapy than literature, and is probably destined for a short shelf life. The dozens of proofreading errors alone attest to the haste with which this book was assembled, the publisher perhaps realizing that its moment of relevance to the American psyche is likely ephemeral. It’s not as good as it could be, but it’s still a fun read.

Howard Davis is a former journalist and intelligence analyst who lives in suburban Virginia with his wife and two Chinese Cresteds.