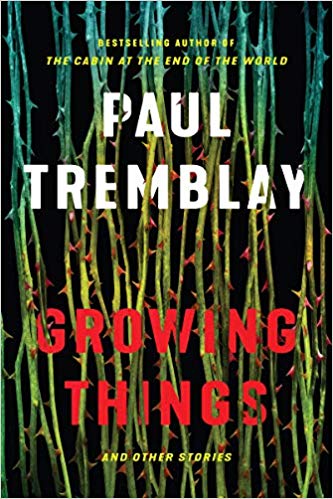 There is no explanation for horror. Horror fiction, at its most successful, evokes fear or disgust or dread, but the source of those emotions is usually — though, not always — rooted in the supernatural. The unreal. The unexplained.

That is what distinguishes the genre from, say, science fiction or fantasy or magical realism, where the fictive world is constructed in a way for the bizarre to be perfectly logical. With horror, be prepared for the weird to appear for no discernible reason, which makes it all the scarier.

The unexplained is clearly on display in Paul Tremblay’s new collection, Growing Things and Other Stories. Also on view are the author’s quirky sense of humor and coy, self-referential style — some of the most interesting stories feature a horror-writer protagonist who resembles Tremblay. But where do those inexplicable monsters/ghosts/malicious weeds come from? We aren’t supposed to ask, and that’s okay.

Frankly, we’d rather not know.

The title story kicks the collection off. In it, Marjorie and her younger sister, Merry, are dealing with their distant and sullen father — Mom ran off years ago — who is doing his best to provide for them in a time when the world has gone to hell. Something horrible is happening outside, leaving provisions in short supply.

When the father goes to find more food and water, the girls are left on their own to deal with the disaster — whatever it is. Marjorie tells a story to little Merry about the “stuff” that is growing everywhere, overrunning crops and even ripping up pavement and toppling buildings. The growing things are unexplained, however: “People didn’t know how or why it grew.”

But perhaps even worse for the girls is the earlier unexplained disappearance of their mother, and now their father. “Merry cannot verbalize this, but the idea of a world where people disappear like days on a calendar is what truly terrifies her.” As bad as the growing things are, that’s the real horror of this story.

“It’s Against the Law to Feed the Ducks” is another tale in which the characters face a catastrophe of uncertain origin and have no choice but to hunker down and try to survive. A couple and their daughter are on vacation in a remote town when they get word that something — we never find out what — has happened in the outside world.

Provisions dwindle, the power goes out, and they realize they can’t go home. The couple presumably knows what happened, but it’s left ambiguous for the reader.

Another story in the unknown-catastrophe category is “Where We All Will Be,” in which a young man comes into his parents’ house but finds no trace of them. When the father returns, the young man realizes something is terribly wrong. They get in the car and drive, fleeing something along with everyone else. Where they’re going and why isn’t explained.

Monsters are a favorite subject of horror writers. In this collection, they appear in “Our Town’s Monster” and “The Society of the Monsterhood.” The former is set in a small town that seems to take pride in the existence of its monster despite the havoc the creature wreaks. They simply cope with its impacts by rewriting history. In the latter, a man does battle with a monster which, initially, he believes he has defeated.

The story “It Won’t Go Away” is about a writer who has had a rough time, professionally and personally, but makes a successful public appearance with another, more successful writer. When the other writer commits suicide, the narrator tries to make sense of it, especially when two other self-inflicted deaths quickly follow.

The writer may also be the narrator of the wonderfully ambiguous “_______,” in which a father is at the beach with his children when a woman, a virtual stranger, insinuates herself into the family in place of the man’s wife. Creepy and delightfully unexplained.

Growing Things includes notes in which Tremblay offers “odds, ends, anecdotes, and rants” that provide fascinating insight into the author’s process and style, including the fact that he has a fondness for certain names that the reader will notice repeated throughout the collection.

The lack of explanation for the sources of the horror in these stories may be frustrating for some readers, but the ambiguity serves to enhance the fear and dread. And that, after all, is why we read horror in the first place.

Clifford Garstang is the author of a novel, The Shaman of Turtle Valley, a novel in stories, What the Zhang Boys Know, winner of the 2013 Library of Virginia Literary Award for Fiction, and a story collection, In an Uncharted Country. He is also the editor of Everywhere Stories: Short Fiction from a Small Planet, volumes I, II, and III, anthologies of stories set around the world.