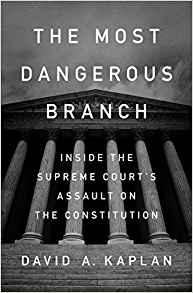 In the words of Alexander Hamilton, the Supreme Court is “the least dangerous branch…having neither force nor will, but merely judgment.” And yet events of 2018 — especially the resignation of “swing vote” Justice Anthony Kennedy, and the ugly and contentious Brett Kavanaugh hearings — were only the latest manifestations of the court’s transformation into a political circus.

David A. Kaplan’s new book, The Most Dangerous Branch, which was published between Kavanaugh’s nomination and confirmation, asserts that the Supreme Court has gone seriously off the rails: pushing itself into increasingly incendiary cases, attempting to remake U.S. social order, and overturning acts of Congress at will (and, in the process, weakening that branch of government). He mostly makes his case, although it will take a hardy reader to stick with him until the end.

How did the court get to such a pass? It is not that justices always demonstrated wisdom and superhuman impartiality prior to modern times: The Dred Scott decision of 1857 — favoring slave owners over slaves — was arguably the most terrible in the court’s history. Plessy v. Ferguson (1896) not only declared “separate but equal” constitutional, but disregarded a couple of amendments to do so. But for much of U.S. history, the justices themselves were little noticed, even if their judgments were.

In Kaplan’s telling, true politicization of the court started with Roe v. Wade in 1973 and reached a crescendo with Bush v. Gore in 2000. Although one case was “liberal” and one “conservative,” they had remarkable similarities (Kaplan refers to them as “bookends”). In both cases, the court had highly questionable jurisdiction; both made the court and its justices flashpoints for controversy; and both fueled the culture wars that rage today.

There is, in fact, a direct line between the court’s taking on increasingly incendiary (and often inappropriate) cases and the fact that Supreme Court nominations are now treated as wars of attrition (the handling of Merrick Garland being an extreme example).

Kaplan, unfortunately, takes many pages to get to his main point, because his stellar credentials — his law degree; his tenure as legal affairs editor at Newsweek; his access to past and present justices, law clerks, and senior U.S. officials; and his diligent study of reams of primary and secondary sources — are something of a dual-edged sword. He just knows so much about the court, and he is eager to impart every bit of information to us.

The second part of the book, “Cases,” is far more central to Kaplan’s argumentation and would have been better placed at the front. The actual first part of the book, “Characters,” is exasperatingly padded and should have been trimmed down to the details — life experience, qualifications, judicial outlook — providing insight into how each justice impacts the work of the court.

Instead, Kaplan crams in such gratuitous trivia as the bobbleheads on Chief Justice John Roberts’ desk and Elena Kagan’s moniker, “the Fro Yo Justice” (a story that is not even funny). Add in such breathless prose as “[spectators] started camping out in front of the [Supreme Court] building four days beforehand as if it were a Grateful Dead concert,” and the reader can feel that a far more apt title of this book would be Supreme Court Confidential.

The reader who sticks with Kaplan to (almost) the end, however, is rewarded with the finest chapter in the book. “A Disdain for Democracy” details the court’s 2013 Shelby County v. Lynch decision — the one that eviscerated the Voting Rights Act (VRA) of 1965. No case makes clearer that the court’s second-guessing of Congress has reached new heights:

“The Voting Rights Act…was a perfect illustration of the role that the Framers intended for the legislative branch. Congress identified a problem, crafted a solution that worked, and periodically updated the law to account for changed factual circumstances.”

The court, however, struck down VRA provisions requiring states and local governments with histories of voting discrimination to obtain federal permission prior to any changes to their voting laws. With the VRA greatly weakened, new barriers to African Americans’ ability to vote (closure of polling places, strict new voter ID laws) sprang up like mushrooms. Kaplan’s indignation over this case makes for strong storytelling, and the chapter provides a hint of how much better this book could have been if he had taken the cuteness factor down a number of notches.

From here, however, it’s mostly downhill. The last chapter, “A Less Dangerous Branch,” promises ideas for reforming the court but offers little other than a weak pronouncement about Chief Justice Roberts having the temperament to remake the court.

In this respect, Linda Greenhouse’s in many ways superior (certainly pithier) book The U.S. Supreme Court: A Very Short Introduction provides far more insight. In comparing the U.S. judiciary to those of a number of European countries, she finds that these countries have different rules for selecting and confirming judges. There is no lifetime tenure. There are norms of unanimity, where dissents are made in private (or are even illegal).

Not surprisingly, these judiciaries are far less politicized. In other words, there are real-world solutions right before us. The question is whether they can be implemented in our highly charged environment.

The American Spirit: Who We Are and What We Stand For

In this collection of speeches, the famed historian reflects on what his countrymen are made of.