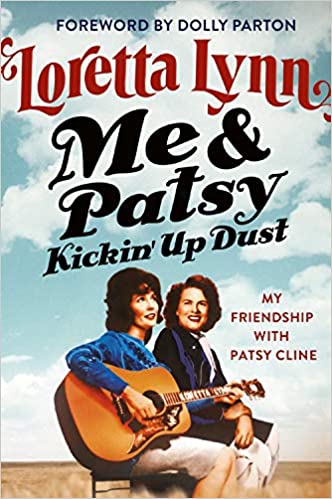 When she was 15, Loretta Lynn went from her father’s lap to her husband’s arms — and to motherhood.

Her parents opposed the match. Oliver “Doo” Lynn was seven years older, a veteran of World War II who was unwilling to become a Butcher Holler miner, according to Me & Patsy Kickin’ Up Dust: My Friendship with Patsy Cline, a candid but never caustic memoir by Loretta and her daughter Patsy Lynn Russell.

It took only a few kisses, however, and a spoonful of Doo’s manly magic, to bewitch an innocent girl into matrimony and a move to Custer, Washington. When Loretta’s reality was served up, she tolerated a pile of childrearing chores and a decade or more of grinding work at Bob and Clyde Green’s dairy farm:

“I cleaned, washed, ironed, and cooked for the thirty-six ranch hands that worked there. My husband worked there, too. He’d milk the cows in the mornings, work in the fields all day, then milk again in the evening.”

One night, while they were watching “Arthur Godfrey’s Talent Scouts” on their black and white, Sears-financed television, Loretta heard Patsy Cline, already a headliner, for the first time. Cline’s voice was so powerful, vulnerable, and lonely that it transfixed Loretta into believing they would one day meet.

Loretta was 24, a mother of four — so far — and destitute. Then, after 10 years together, Doo suddenly realized Loretta could sing and bought her a $17 guitar, which she quickly mastered:

“I wrote my own songs…about raisin’ babies, about love and family…I wrote about marriage and betrayal and hurt…And when Doo heard the songs…he said they were good. Doo hadn’t ever encouraged me like that. I liked it. Doo worked pretty regular, but we were barely living on what he made. Somehow he decided my singin’ was our ticket…He started acting like maybe I was worth more than just a woman he lived with, having his babies and cookin’ his supper. I won’t lie. I liked it when he saw me that way…After that, me and Doo were a team. No matter what, me and Doo were gonna make something out of ourselves, for our family.”

He started talking up his wife’s talent effortlessly with small-time bar and club owners, while Loretta performed.

As Doo angled for ascendance with more respectable gigs, he always informed management, with impressive results, that Loretta’s greatness was second only to Kitty Wells, the Queen of Country, who, in 1952, became the first female country recording star to reap a number-one-selling record.

When Loretta auditioned for Buck Owens’ television show, he asked for encores and requested her to appear on his Saturday night radio amateur competition; she beat more than 30 contestants — and earned her latent independence:

“I’d started making a little money for once. For the thirteen years I’d been living in Washington I never had two nickels to rub together…Every bit of work I did on the Green’s farm was so we didn’t have to pay rent. Doo got paid cash and he considered that money his. He did whatever he wanted and dared me to say anything about it.”

Soon, the spots on Owens’ show were noticed by a Canadian businessman, who signed Loretta to his Zero record label and financed her single, “I’m a Honky Tonk Girl.” When the 3,500 copies arrived, Loretta and Doo pushed all of them out — along with her photograph.

Doo, in the meantime, had obtained a complete list of country music DJs. They covered the West Coast and more, visited nearly every radio station with any influence, and requested interviews and air play — pushing their record up the charts. And Loretta kept her one good dress ready in case she had to speak or sing suddenly.

By the summer of 1960, “I’m a Honky Tonk Girl” was a triumph — just as Doo, a naturally instinctive promoter, had predicted. It was #14 on the country charts.

After their tour, Doo and Loretta met brothers Doyle and Teddy Wilburn at a West Coast radio convention. The duo performed occasionally, had a deal with Decca Records, owned the illustrious Wil-Helm Talent Agency in Nashville, and emboldened the Lynns to stay in contact — especially if they planned to visit Tennessee.

After a brief visit home, Loretta and Doo decided to gamble everything on the Country Music Capital of the World and showed up at the Wilburn house — without notice or a contingency plan. Luckily, Loretta’s one hit, wrapped in an endorsement from the powerful Wilburns, lassoed around the technicalities, time, and trouble normally required to get a booking at the Opry — an opportunity that eludes most singers for a lifetime.

In 1960, Patsy Cline was in a near-fatal automobile accident. Her long hospitalization coincided with Loretta’s slot at the Opry; that night, Loretta sang Patsy’s hit “I Fall to Pieces” and dedicated it to her. Afterward, Patsy’s husband, who was waiting backstage, said his wife had seen the show and wanted to meet her.

In their first few moments of friendship, the feeling Loretta remembered from watching her on “Arthur Godfrey” re-emerged. With shared stories about poverty, husbands, and children, Loretta and Patsy grew into sisters and soulmates, comforters and confidantes, twins.

Three years later, the spell of enchantment was ruptured when Cline’s plane crashed. Some say she predicted her own death. True or not, her life has since fallen into mystique. Loretta writes, "Patsy hasn't left me...Even now...I hear her...She changed everything. And I know I meant a lot to her, too. She'll always be a part of me...We made each other better.”

The Field of Blood