Heirs of the Founders: The Epic Rivalry of Henry Clay, John Calhoun and Daniel Webster, the Second Generation of American Giants

A robust examination of the American Triumvirate. 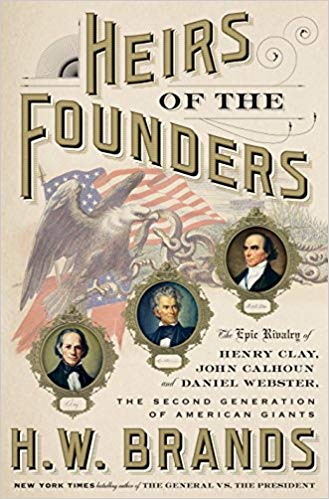 To this reviewer, one of the most sacred spaces in Washington, DC, is the Old Senate Chamber in the U.S. Capitol. If walls could talk, its tales would be profound and legion. Fortunately for us, historian and biographer H.W. Brands has given us a peek into that room by chronicling the voices that resonated there in pre-Civil War America, specifically those of Henry Clay, John C. Calhoun, and Daniel Webster, collectively referred to as the American Triumvirate.

In many ways, Heirs of the Founders is a portrait not only of the men at the center of American politics during the early 19th century, but of the republic itself.

By 1812, the time of their political ascendancy, the Revolutionary War generation was quickly leaving the scene, and the “new American” was taking the reins. Many of these men had little or no knowledge of what it was like to be a British subject. Yet they inherited the single greatest problem in American history that had been left unanswered by the Constitutional Convention: what to do about slavery, an institution thought to be critical to the survival of the Union.

Brands fleshes out three flawed giants, each driven by ambition, each hoping to snare the presidency (all three fell short). The trio was buffeted by the times. We see South Carolina’s Calhoun, initially a nationalist in support of a unified United States, gradually slide toward a rabid embrace of the states-rights doctrine.

Then there is Clay, from Kentucky. He and Calhoun, as members of the House of Representatives, had pushed for a Declaration of War against Great Britain in 1812 as a vehicle for national pride and a place on the world stage. They got their wish but perhaps should’ve been careful what they wished for: Born out of America’s victory over England was the ascendancy of Andrew Jackson (who loathed both men) to the presidency.

The third member of this cadre, Massachusetts’ Daniel Webster, emerges as the great voice of the nation on at least two occasions in which secession was a possibility prior to the Civil War. People would pack the Senate gallery whenever one of these three men was scheduled to deliver a speech. There was high drama and a singular kind of anticipation prior to their speaking.

Until 1820, sectional balance in the Senate had remained stable, but as the nation expanded and began creating new states, this balance became increasingly important, as well as precarious. The Missouri Compromise of 1820, fostered by Clay, earned him the moniker “the Great Compromiser.” The agreement, which allowed Missouri to enter the Union as a slave state, while simultaneously carving part of Massachusetts into the free state of Maine, was the first of several critical conciliations over expansion and slavery in which Clay would play a pivotal role.

Thomas Jefferson, by then one of the few remaining Founders, said of the moment that “it was like a fire bell in the night,” also famously intoning that “slavery was like holding a wolf by the ears. You didn’t want to hang on, but you dare not let go.”

A decade later, in 1832, the issue at the forefront of American politics was the tariff placed on European goods. While it benefited New Englanders, this “Tariff of Abominations” was anathema to Southerners, who depended on selling their slave-picked cotton abroad.

When South Carolina (with the blessing of now vice president Calhoun) threatened to leave the Union over it, Webster delivered a stirring rebuttal: If a state had the right to nullify a federal law, then the Union would become “merely a rope of sand.”

When the specter of South Carolina’s secession became a real possibility, President Jackson requested a force bill before Congress to himself lead Army troops into the Palmetto State, where he “would hang the first secessionist from the first tree he found.” As a result, Calhoun resigned the vice presidency, and it fell on Clay to seek a compromise that would cool the rising flames down South.

As the century progressed, so, too, did Manifest Destiny’s expansion of the United States. By 1850, gold had been found in California (a territory wrested from Mexico), and its population soared. Brands’ book comes to a climactic and dramatic finish with the debate over California’s admission to the Union as a free state.

By now, Calhoun, Webster, and Clay were physically in decline, yet all three rallied to offer seminal arguments on the issue. Calhoun, increasingly a champion of secession and white nationalism, argued against the limiting of slavery’s expansion into the West.

But Webster, who still believed the Union was indivisible, backed Clay’s compromise to permit California to enter as a free state, while also supporting the nefarious Fugitive Slave Act as a concession to Southerners. Congress supported the compromise, and civil war was averted for another decade. Within two years, Clay, Calhoun, and Webster were dead.

The battle over slavery, Brands concludes:

“Was its most salient aspect at the midpoint of the nineteenth century, but the contest between the states and the national government had hinged on other issues at other times: freedom of speech in 1798, war powers in 1814, the tariff in 1833. So, it wasn’t surprising that the struggle outlived slavery. Clay and Webster, with Lincoln’s help, won the argument that the Union must be unbroken, but Calhoun’s insistence on the need for the balance between the states and the nation found adherents on matters that ranged, during the next several generations, from civil rights and business regulation to school funding and the environment.”

For Brands, the struggle that originated with the Founders remains with us today, making us all their heirs.