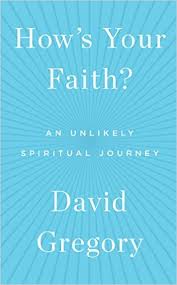 “This is far from a religious how-to,” David Gregory writes early on in his new book, How’s Your Faith? An Unlikely Spiritual Journey. “Rather, it’s an exploration into what’s possible through faith, even if I keep falling short.”

This is Gregory’s first book and comes after years of serving as the chief White House correspondent for NBC News and moderator of “Meet the Press.”

In a style true to his journalistic background, Gregory has indeed done his research. He has probed and examined other religions thoroughly and with an open mind, all in an effort to answer a question asked of him by President George W. Bush during the terrible, trying weeks just after 9/11.

“How’s your faith?” Bush asked Gregory one day. Such highly charged times can certainly prompt this kind of contemplation.

Gregory is correct in stating that he has not, in fact, written a “religious how-to.” He has instead mapped out for readers a kind of spiritual why-to. Why to love. Why to seek out our true purpose. Why to sacrifice and forgive. Why to be humble. Why to question and believe, to reflect and consider the faith of others.

Gregory also takes off his journalist hat long enough to give readers a closer look at the more personal side of his journey. He delves into family history, his relationship with his father, and his mother’s struggle with addiction.

Each chapter in How’s Your Faith? reads as a stand-alone piece, yet one sheds light on another. As a whole, they create a loose chronology of revelation for Gregory on several levels: personal, spiritual, professional, and political.

“Now I understand the spirit of the question that President Bush asked,” he writes in his epilogue. “It was an opening for me to examine myself and my life.”

Throughout the course of his research, Gregory collects quotes from renowned religious scholars, preachers, and pastors, as well as his own teachers, and he incorporates them into his narrative.

“Religion has made my life much more nuanced and confusing,” teacher Erica Brown admits to him. “I live with ambivalence continuously.” This admission seems most apt as Gregory weaves together these strands of both observed and experienced honesty and self-doubt.

It should not, therefore, be one’s intent to come to this book looking for answers. It is, alternatively, a book of questions, a checklist of why-tos to take from these pages and carry out into the world.

Kristina Moriconi is a poet and essayist. She is the author of the chapbook No Such Place (Finishing Line Press 2013). Her work has appeared in Crab Creek Review, Blood Lotus, Cobalt Review, and is forthcoming in December. In 2014, she was named the Montgomery County, Pennsylvania, poet laureate. She earned her MFA from the Rainier Writing Workshop in Tacoma, WA, and she lives and teaches now in suburban Philadelphia.