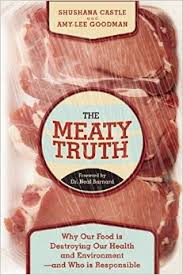 Have you ever wondered where your dinner came from? In The Meaty Truth, Shushana Castle and Amy-Lee Goodman tell you in overly vivid detail.

Following up to their previous book, Rethink Food: 100+ Doctors Can’t Be Wrong, The Meaty Truth is a tirade against American agribusiness and a government system that allows a few large corporations to dominate the country’s food production.

In this book, Castle and Goodman are on a mission to educate the public about where our food comes from and steer the reader toward a vegan lifestyle. To do this, they focus on factory-farm practices, the chemicals and antibiotics in food, the failures of government agencies, the economics of food production, and the health consequences of a diet centered on animal products.

While lecturing on the poisoning of our environment and the destruction of our health, Castle and Goodman take us through the horrors of factory farming, describing in graphic detail the inhumane treatment of animals and the unsanitary and unhealthy food processing practices.

The authors blame livestock production for polluting our water and point out that although the Clean Water Act designates CAFOs (concentrated animal feeding operations) as “point-source pollutants,” the states have failed to enforce the law. They claim that CAFOs “are allowed to pollute as long as they have a piece of paper that says they can,” and that the EPA has failed to regulate discharge.

Castle and Goodman also introduce us to lagoons that operate as underground storage areas for the animal waste produced by factory farms. This process of storing waste releases toxic gases into the air and leaks manure into streams, rivers, and private wells. Many readers have probably never heard of lagoons, but they will get the idea quickly as they are drilled with unnecessarily gory details under subtitles like “A Sh!tty Situation” and “Welcome to Cesspool Paradise.”

The authors also complain that oil spills receive wide media coverage, whereas lagoon spills occur frequently with little to no fanfare. However, even if the Oceanview Farms spill is not yet common knowledge, it has been covered before. And recalls over the years of contaminated produce, as well as chicken and beef, have also alerted consumers that all is not well down on the farm. Thus, this book is not as insightful as the authors claim.

The Meaty Truth delves into the health concerns associated with eating a meat-based diet. Castle and Goodman argue that eating meat is disastrous for our health because the human body was not designed to consume animal products. They methodically list numerous chronic conditions and diseases — heart disease, cancer, obesity, diabetes, osteoporosis — that result when we stray from eating plants and explain why the standard American diet causes serious illness.

The book recounts repeatedly the failure of the USDA and FDA to acknowledge the negative effects of chemicals and toxins in food and to regulate the use of antibiotics. According to Castle and Goodman, “The USDA and FDA claim these so-called ingredients are added in such finite amounts that they have no real effect,” and the authors are justifiably surprised that these “ingredients” are allowed in food at all.

Readers are constantly admonished to read nutritional labels and know that all ingredients may not be listed on a label, so “eat at your own risk.” And at the end of each chapter, the authors include a short list of action items, which are mostly common sense: “Clean your fruits and veggies” and “Stop eating crap and you will stop feeling like crap.” At times, it seems like we are being lectured rather than informed.

To further emphasize their point, Castle and Goodman list the chemicals and toxins present in food products, either added directly or fed to livestock, and they provide readers with recipes and a long list of websites related to eating a plant-based diet. Although the information is helpful and convincing, it seems like the authors’ real intention is to shock the reader into a new lifestyle.

Castle and Goodman also point out that producing the traditional American diet is not cheap. Echoing Frances Moore Lappe’s Diet For a Small Planet, they state that “to produce that meat under the factory farming system requires oil for fertilizers, abundant land to grow crops for animal feed, antibiotics to compensate for the unsanitary conditions and disease outbreaks, growth hormones to raise animals at faster rates, and waste management to truck away the billions of tons of manure generated by the animals.”

In The Meaty Truth, however, Castle and Goodman focus on factory farms and downplay climate warming. Blaming livestock for almost everything, they even boldly state, “We are facing the sixth-largest mass extinction in history as ten thousand species disappear each year due to factory farms.”

Castle and Goodman seem to assume that most people don’t know (or don’t care) where their food comes from. Yet the success of grocery stores such as Whole Foods and the popularity of books such as T. Colin Campell’s The China Study, which is cited in The Meaty Truth, are evidence that there is a significant population that is very aware of where their food comes from and very mindful of what they eat. In fact, the list of celebrity vegans is an impressive one. Even in urban neighborhoods, residents are planting vegetable gardens and raising chickens.

The Meaty Truth’s message is loud and clear: Animal products are bad and vegetables are good. While the authors are passionate about educating the public and promoting the virtues of a plant-based diet, even they admit most of this information is not new. The book is heavily peppered with endnotes, referencing almost 40 pages of books, articles, and studies on this topic.

The Meaty Truth is short and simple to understand, and Castle and Goodman have done their homework. But the benefits of a vegan or vegetarian lifestyle are already well known. What is new is their presentation of agribusiness. Unfortunately, the book is cluttered with vulgarities, which are so overused they become tiresome. Chapter titles such as “The All-American Meal: Eating Sh!t and Drinking Pus” and “A Hamburger Seasoned With Feces, Please!” are bound to put some readers off. What may be an attempt at sarcasm and humor is simply offensive.

Even though some readers will be appalled by the hard facts presented here, the real challenge will be overlooking the choice of language and the fact that The Meaty Truth mainly offers information already available in a more palatable form.

Christine Baleshta lives in Austin, Texas. She is the author of Looking for 527, and her essays have appeared in naturewriting.com and Yellowstone Experiences.