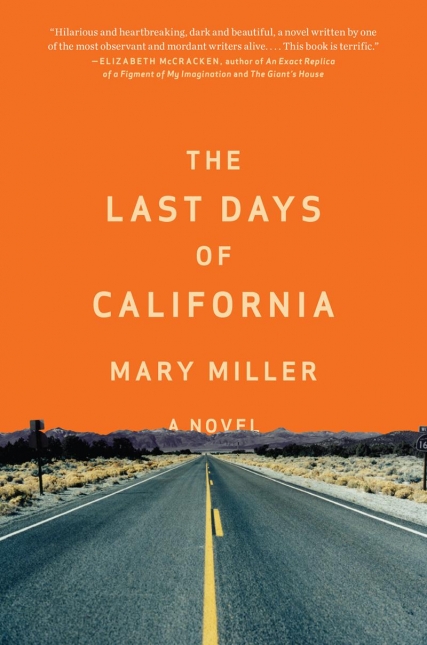 Mary Miller’s absorbing first novel, The Last Days of California, follows the Metcalf family — narrator Jess, her elder sister, Elise, her mother and her father — on a week-long road trip from their home in Montgomery, Ala., to California. They are in Louisiana when the novel opens, and Jess, who is 15, doesn’t think much of the place: “In a shitty little town in Louisiana, which was full of shitty little towns, we stopped at a Waffle House and sat at the counter.” Jess isn’t sure she wants to be on this trip at all, but her ambivalence is nothing compared with the restlessness and impatience of Elise, who is in full-blown rebellion against her parents: arguing with everything they say, sneaking out at night, drinking, smoking weed and hiding the early stages of an unplanned pregnancy, a secret only Jess knows.

Along the road the Metcalfs bicker about what to listen to on the radio, where to stop to eat and whether or not the drought they are driving through is caused by global warming. Jess watches with a mixture of envy and pity all the attention that is paid by men and boys to beautiful Elise, and wonders if she will ever feel as at home in her own skin and confident as her sister appears to be. The bonds of affections between the four of them wax and wane, as does the quality of the motels where they stop for the night. Through all this, Jess observes the swirl of life around her with the perceptive and plaintive eye of a teenage girl looking for answers about how to live and who to be and not immediately finding them.

This may all seem ordinary and familiar to any reader who has ever been in a car with relatives for more than 20 minutes. However, Miller’s characters are not just on the road for a vacation. They are on their way to California because they believe, or at least the parents claim, that the world is on the brink of the end times and the Rapture, when all true Christians will be taken up spontaneously into heaven, is due to occur at the end of the week. They are on a mission, passing out tracts and trying to save the last few salvageable souls before the chaos of the Apocalypse gets going the following Monday. When a waitress at the Waffle House asks how Jess’ father is doing, he hands her a tract that says “All Suffering SOON TO END.”

“‘The world is passing away,’ he said, ‘but those who do the will of God will remain forever.’
In response she set a tiny napkin in front of him with a knife and fork on top. Then she moved down the line: my sister, Elise, and my mother, and me.”

These beliefs about imminent exaltation contrast awkwardly with the ordinary world still holding the Metcalfs, a contrast that lends the novel both poignancy and humor. The girls have made “Heaven Mixes” for the trip: iPod playlists of songs that contain the word “heaven,” none of them remotely devout. When Jess asks after another group from their church that has gone on a last-ditch effort to save people, Elise says they are probably eating “at every food court in South Florida” because one of their members is “a big Sbarro’s fan.” And yet the yearning toward and preparation for salvation is also serious, particularly on the part of the girls’ father. A serially unemployed diabetic with a persistent gambling habit, it is not clear how he is managing to pay for this trip, or what will await the family if they are disappointed and must, after all, go back home and resume their lives.

Key to the novel’s effectiveness is Jess, who is old enough to have begun questioning her parents beliefs but has not thrown them out entirely. In her bounded world of school and friends, she is something of an outcast, unlike her popular sister, and this has lent her an insightful sympathy for her parents and their vulnerabilities. She intuits that the possibility of escaping to another world might be more precious to people who have failed, who are lost, who are aging and sick, than to someone who is young and beautiful. She sincerely wants to believe in God and longs to be lifted out of her life one way or another, though she isn’t sure she wants it to be through divine intervention. As much as anything, this novel is a coming-of-age story, as Jess works out her longings for connection, for acceptance and for growth.

The Last Days of California is a funny, moving, carefully observed novel about a young woman’s developing sense of herself and the possibilities and limits of the world around her.

Emily Mitchell’s first novel The Last Summer of the World was a finalist for the 2008 Young Lions Award. Her first collection of short stories is forthcoming from W. W. Norton in 2015.She teaches creative writing at the University of Maryland.