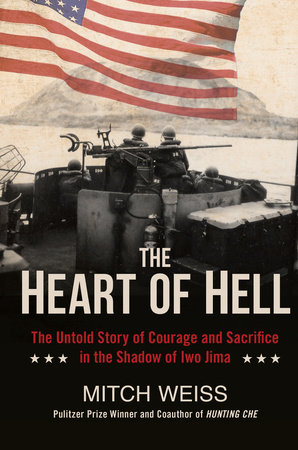 Mitch Weiss, the Pulitzer Prize-winning author of Hunting Che and several other page-turners, has written an unusual treatise about the little-known campaign leading up to the Battle of Iwo Jima. Instead of a dry history text, The Heart of Hell portrays the two-day conflict through the eyes of the crewmembers of the gunboat/landing craft LCI (Landing Craft Infantry) 449.

By presenting the backstories of a select portion of the 71-man crew, Weiss gives his reader an intimate view of the human beings who fought this vicious and instrumental World War II battle in the Pacific.

LCI 449 provided gunfire support, protection, and reconnaissance for underwater demolition teams as they preceded the main waves of assault troops in the invasions of Saipan, Guam, and Tinian in the Mariana Islands. Iwo Jima, once it was captured, was a key volcanic island used as an emergency landing field for B-29s returning from bombing missions over the Japanese mainland. Prior to the invasion, intelligence was needed on the condition of the beaches and the underwater ground leading to them.

The job of 449 and its fellow gunboats was to provide gunfire support while the demolition teams did their dangerous work, return to sea where the troop transports lay, and then accompany the combat troops as they launched their assault on Iwo Jima. In 10 minutes, the lightly armored 449 took three direct hits, turning its decks into a charnel house. Twenty of its 71 crewmembers were killed, and as many wounded. Of the officers, only the engineering officer was left unscathed. Most of the crew — whom the reader has gotten to know intimately — were either killed or seriously wounded.

Of the 700 men in the LCI taskforce, 200 were either killed or so badly wounded they returned home. Lt. Willard Nash, 449’s skipper, had been promoted to squadron commander and so was in the lead boat, the least damaged. He was extremely distressed to learn his old vessel, the 449, was the second most-damaged (after the one that sank). Eight members of the 449 crew were later highly decorated, including the now-captain Lt. Herring, who won the Medal of Honor.

The LCIs’ experience proved invaluable to the main mission — the direct assault on Iwo Jima. The Japanese mistake of exposing the location of their heavy artillery in order to attack the gunboats allowed the Americans to destroy them with close-proximity battleships. If this had not happened, the assaulting Marines would have lost far more than the 26,000 men killed over the ensuing 36 days. That figure was more than the 20,000 Japanese dead (only 216 survived). It was the only battle in the Pacific where U.S. deaths exceeded those of the enemy.

The last chapter in The Heart of Hell details the after-war lives of the survivors and the lives of the lovers and families of the slain crewmembers. Much of this history (and the pre-war relationships) was gleaned from the author’s 24 interviews with, and 17 letters from, the 449 crew and their families.

For example, super-religious First Class Seaman Bozarth from Oklahoma was one of the men killed. “Bozath’s father was overwhelmed with guilt. He had tried to convince his son not to enlist, but the boy was relentless. He’d pestered his father until he gave in, and then? Then he was dead.”

Weiss’ book will appeal to the general reader because it gives an intimate picture of what life was like for the average sailor during WWII’s Pacific operations — and the personal paths that each took to get to his vessel.

For military experts, the tome is an eye-opener in that most treatises on the battle of Iwo Jima focus on the travails of the Marines who conducted the front-line fight, whereas The Heart of Hell portrays the significance of a Landing Craft Infantry vessel and the lives of its crew.

Gary Knight has been a writer and tutor for 17 years, following a 26-year career in lobbying and politics. He graduated from the U.S. Naval Academy and the American University graduate school and served 12 years on the Falls Church, VA, city council. He is the author of Forgotten Brothers, a novel about the Pinzon brothers, who ensured the success of Columbus’ first voyage, and How to Treat a Woman. His lobbying memoir, 26 Years of Shoe Leather, will be published this September.

Harvey Kaye’s rousing history about the Greatest Generation reveals the continued impact of the Four Freedoms on American history.