The First Congress: How James Madison, George Washington and a Group of Extraordinary Men Invented the Government

In this detailed account, the author uses multiple sources to chronicle the achievements — and limitations — of America’s nascent political system. 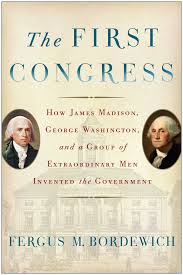 Has any Congress ever accomplished as much as the very first one, meeting in three sessions between March 1789 through March 1791, in two temporary capital cities (New York and Philadelphia)? Fergus Bordewich thinks not. His central thesis in The First Congress is that this Congress established the high-water mark for U.S. legislative achievement.

Bordewich, the author of several previous volumes of American history, has a lot with which to work. When the U.S. government opened for business after the adoption of the Constitution by 11 states (Rhode Island and North Carolina were tardy), "firsts" were aplenty, among them the first: swearing in of a president, George Washington; adoption by Congress of the constitutional amendments that became our Bill of Rights (courtesy of Congressman James Madison); enactment of a fiscal plan that included assumption of state debts (courtesy of Treasury Secretary Alexander Hamilton); and selection of the Maryland bank of the Potomac River near the Anacostia River as the nation's permanent capital (courtesy, at least in part, of a dinner hosted by Secretary of State Thomas Jefferson for Madison and Hamilton).

And there were "lasts," as well — including the first and last time a president appeared unannounced on the floor of the Senate, which Washington did to complain about rejection of a presidential nominee and later to seek its "advice and consent" to a treaty on the spot.

A simple recitation of such outcomes alone could power a solid narrative, but Bordewich provides significantly more. Drawing upon (and acknowledging) an archive of materials related to the first Congress housed at George Washington University, he both demystifies and details the turbulent political circumstances of 1789-1791.

After all, the members of Congress and the Executive Branch were not demigods casting their Olympian gaze on the new nation. John Adams, the first vice president, quickly squanders his political capital. Madison, who begins as Congress' most influential member, slides toward sectional interests. Washington is curiously absent from the debate over Hamilton's financial plan.

More fundamentally, when Benjamin Franklin, quite literally from his deathbed, calls for Congress to abolish slavery, his wishes are blunted by a combination of Southern belligerence and Northern indifference (perhaps both with a dash of claimed realpolitik). The division between North and South edges toward center stage.

Bordewich dives into the emerging fault lines of American politics in order to deepen our understanding of both opportunities and obstacles. What Madison had called “factions” were drawing lines between the North and South; manufacturing and agrarian; emerging political parties representing distinct political philosophies. And, Bordewich tells us, “the First Congress was characterized by the collision of opposing interests, ideological dogmatism, preening egos, personal and sectional distrust, self-dealing, and the dragging inertia of time-serving mediocrity.”

But these apparent frailties and emerging factionalism merely deepen the inquiry. How did so much (while, in the case of slavery, also too little) get done? From a modern perspective, part of the answer might be simply that these men (and they were all men) had no choice but to confront each other personally and directly — there were effectively no staff to act as go-betweens. Bordewich relates the personal interactions between Congress and the Executive Branch. Might this have improved their ability to get business done?

We can consider such possibilities because, and by design, both the ringing tones of the Declaration of Independence and the Constitution lie outside the scope of Bordewich's analysis. In an era when fascination with the Founding Fathers has leapt the usual channels of historical discourse (reaching even to the shores of Broadway theater), Bordewich turns our attention from political philosophy to pragmatic politics.

More than once, he reminds us that these leaders were very conscious that the American government was an experiment, knowing full well that experiments can fail. Why did they solve the problems they did? Perhaps because they had a view of their responsibility to govern through mechanisms that many of them had only recently invented. In other words, because they “believed in politics as a tool of national survival.”

As Bordewich explains, these men understood the operation of governmental operations — that is to say, “politics” — as “what they had fought the Revolution for”; the opportunity to demonstrate to the world that this experiment in self-governance would succeed.

This is a tale told well. Execution seldom is as evocative as creation. In this case, however, the execution of the first Congress proved to be, in its own way, the concluding step in creation of the American Republic.

Jon Sallet works for an agency of the federal government that did not exist in 1791.