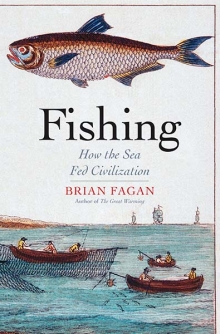 At the apex of a long career of scholarship and fieldwork, archeologist Brian Fagan has authored a vivid history of our zeal for harvesting creatures of the deep. Fagan’s 46th book overflows with insights into our dietary yen for the fish that once filled our wild seas in seemingly inexhaustible numbers.

Fagan’s narrative reaches back millennia to trace the pursuit of sea creatures by “fisherfolk,” as he charmingly calls them. Fishing begins in the days of plenty: Among preliterate, classical, and medieval societies. Then it glides forward into the present day, when the outlook for this once-abundant resource begins to turn bleak.

There’s a welter of ironies lurking in this worrisome devolution. Advances in technology, introduced to make massive hauls the norm, have depleted wild populations. Is it a surprise that, as Fagan reveals, the bulk of all fish harvested today are raised on fish farms? Or that the persistent human taste for marine creatures continues to make fish the most traded commodity in the world?

These factors — some distressing, some tinged with hope — close out Fagan’s narrative, but not before the professor presents the history of fishing via a swarm of piscine factoids that could fuel a foodie conversation well into an evening of convivial one-upmanship.

After a long discussion of wild fishing in tribal societies (via handlines, nets, traps, and even baskets), the author examines the surprisingly widespread practice of farming fish in ancient Greece and Rome, along with Egypt and China, where aquaculture got an early foothold.

One surprising revelation: Much of our knowledge about Greek fish consumption comes from ancient comedy, which flourished in the 5th century B.C., where comic chefs sounded off on stage about shopping lists and recipes.

Among the Greek elite, eels, grouper, and tuna (the latter two species had to be fresh caught) were at the pinnacle, and the consumption of preserved fish (dried or salted) was loudly disdained as a habit of the hoi polloi.

In Rome, eels — both wild and farmed — topped the menu, although Fagan reports that some noblemen kept them as bejeweled and pampered pets. But in Rome, too, by and large, aquaculture was an avocation of the upper classes, who maintained elaborate pools on their estates.

And eels, we learn, are a stunningly prolific breed. One grower, for instance, supplied 6,000 of them for Julius Caesar’s triumphal banquets in 46 and 45 B.C. (At modern Italian fish farms, a grower starting with 25 pounds of juvenile eels [elvers] can produce four tons of edible adults by season’s end.)

The Chinese apparently had different tastes, however. Their species of choice for aquaculture was carp. A classic Chinese primer, Treatise on Fish Breeding, appeared in 475 B.C. (Medieval Europeans also raised carp for consumption, mostly in association with religious houses.)

One intriguing Chinese approach to harvesting wild species deserves mention here. In an aquatic variation on falconry, fishermen would dispatch cormorants out to sea to snatch fish venturing near the surface. The Chinese often encircled the necks of these seabirds with rigid rings to ensure they returned to their handlers with their catches intact in their beaks rather than their stomachs.

As this brief overview suggests, Fishing is both comprehensive and hyper-informative, ranging widely in geography and far beyond the examples cited here. With an attentive read, you will also learn much, for example, about the wild anchovy fisheries of Peru, not to mention the large-scale harvesting of North Atlantic species.

Both herring and cod were Bronze Age staples in Northern Europe. By the 15th century A.D. ships were venturing out past Iceland — even as far as Newfoundland — in pursuit of the massive and elusive schools of both species. The first was typically less than a foot long, while the other, two to four feet in length, often approached a hundred pounds in weight. Despite their differences in size, both species were enormously profitable to pursue, which accounts for the prodigious risks fisherfolk took in bringing them to market.

Professor Fagan’s book, which is both exhaustively rich and richly exhausting, covers the waterfront with the relentless thoroughness of an undergrad course on its topic. It scrupulously crams fact upon fact, sardine-like (ouch!), into every chapter.

For some readers, tackling Fishing might recall a vaguely nagging anxiety: Pay close attention or risk missing a detail that ends up on the exam. That response could drain off some admiration for the granular complexity of Fagan’s approach to his subject.

Former academic Bob Duffy is a Maryland author, as well as a practicing consultant in branding and advertising.

Crush: Writers Reflect on Love, Longing, and the Lasting Power of Their First Celebrity Crush

By Cathy Alter and Dave Singleton