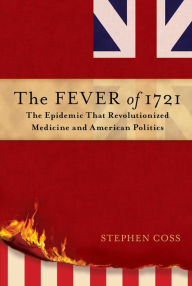 An assassination attempt on a government official. A grenade tossed through the window of a private home. Journalists arrested and imprisoned without formal charges. Rumors of a deadly, highly contagious disease leading to mass hysteria. Political brinksmanship that results in the loss of moderate voices.

All these events could have been ripped from the headlines…of three centuries ago. With The Fever of 1721, Steven Coss takes us into the heart of New England 50 years before the American Revolution, where the seeds of basic willfulness in resisting British administration of colonial affairs had already begun to sprout.

Coss' narrative revolves around concurrent events: a smallpox outbreak in Boston and the genesis of independent journalism during the epidemic. In The Fever of 1721, readers encounter some familiar names from long-forgotten American history classes as well as an assortment of other characters known primarily to academics specializing in the stories of the later Puritans.

Coss’ tale is peppered with unlikely (and some quite unlikable) heroes: James Franklin, an upstart printer who abused his brother; Cotton Mather, a prominent preacher overly concerned about his own power and secular reputation; Elisha Cooke, a wealthy, well-connected man affecting the appearance of an ordinary citizen in order to garner political support; Zabdiel Boylston, a conventionally trained surgeon willing to hazard the new treatment technique of inoculation; and William Douglass, an elite-schooled physician determined to quash what he considered an unorthodox practice.

Besides relating a story of the momentous effect of a short-lived newspaper which — like certain inflammatory publications since — arose, achieved notoriety, and disappeared, The Fever of 1721 examines how science and medicine made some of their more dramatic discoveries, how people whom we might today consider backward because of their religious beliefs or lack of formal training were among those who significantly advanced human knowledge.

In the developed world, where vaccinations have (for the time being) removed the threat of regular mass outbreaks, we have long forgotten the frequency of these natural-disease disasters which punctuated the lives of human beings — and left the survivors with permanent scars. Coss does not wallow in the gory details of deaths, but catalogues the percentage of smallpox sufferers and the extent of the epidemic.

For an historian, there are several potential pitfalls when talking about your subject to a non-specialist audience. Events can be dulled with too many irrelevant details and insufficient human interest. You can fail to note how far a time and place is from our own, how mentalities and practices differed significantly.

At the other extreme, you can emphasize otherness to the extent of precluding commonality. Coss adroitly avoids these traps, showing people who were subject to the same temptations and displaying the same virtues as we are, yet possessing cultural peculiarities long forgotten. For example, Coss notes that the Puritans — nowadays regarded as models of fundamentalist Christianity — did not celebrate Christmas, actively rebelling against attempts by Anglican politicians to close regular enterprise on December 25th.

The Fever of 1721 prompted me to want to read more, as it hinted at fascinating details to be discovered. For instance, how did a New England Protestant pastor end up with a Chinese biographer? How much has lack of humility in popularly celebrated people not only damaged the lives of their contemporaries, but also perverted the historical record?

Coss points out that in personal success narratives, we tend not to acknowledge the contributions of those whom we dislike. Benjamin Franklin's famous autobiography presents him as a self-made man. Yet, as Coss reveals, many of the ideas for which Benjamin became legendary were based on his older brother James’ innovations, and his life course was charted in large part by the early years he spent with James.

My one quibble with the book was Coss’ acceptance of the Hawthornesque depiction of Puritans as rigid, emotionally twisted, grey-faced men perpetually obsessed with ferreting out witches. Certainly, Cotton Mather was a key figure in the Salem trials that tarnished the Pilgrim legacy, but could it be that his behavior was not within the pattern of his forebears, or too reflective of their most dangerous vices and not indicative enough of their long-celebrated virtues? As Coss records it, Mather could have been a peculiar case, shaped as much by recurrent personal tragedy as by individual pride.

Nowadays, readers need not fear smallpox, but indulging in The Fever of 1721 would be an excellent and informative way to pass time while convalescing from a seasonal cold, and to avoid the feverishly repetitive media coverage of this year's presidential race.

While enrolled in Georgetown University’s MA program in Biohazardous Threat Agents and Emerging Infectious Diseases, Christina Petrides had the pleasure of meeting Donald Henderson, who oversaw the United Nations’ team that successfully eradicated smallpox worldwide. She works as an editor in Columbia, SC. You can follow her on Twitter at @cepetrides.