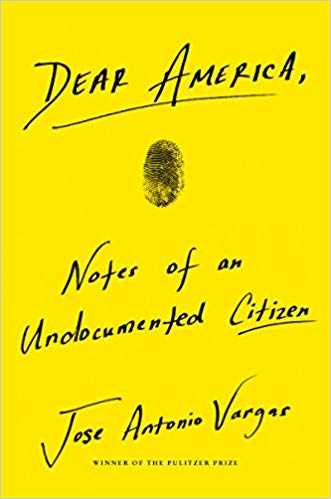 Since the early Stone Age, humanity has been moving. From the Palaeolithic Period about 2.5 million years ago, when human development was defined by its use of chipped stones, hordes of people moved from one region to another. They fled conflict and famine, foreign invasion, and forced emigration. They began in Africa and crossed into southern Asia and Oceania about 50,000 years ago, and they are still moving.

What 21st-century media outlets call the "immigrant crisis of today" is merely a manifestation of the inalienable instinct of human beings to move, according to Jose Antonio Vargas, author of Dear America: Notes of an Undocumented Citizen.

Vargas was born in the Philippines. When he was 12, his mother sent him to the United States to live with her parents. Not until four years later, when he was 16, did he realize he was "illegal"; that is, without proper documentation authorizing his presence in the United States. More than two decades later, he writes, "I am still here illegally, with no clear path to American citizenship."

Dear America, is a sweeping, well-researched story of the plight of undocumented immigrants like Vargas, who work, pay taxes, form families, and live for years in America fearful of deportation. Written as a memoir, the book, Vargas says, "is not about homelessness, not in a traditional sense," but "the unsettled, unmoored psychological state that undocumented immigrants like me find ourselves in."

He adds, "This book is about what it means to not have a home."

It is a story belonging to approximately 11 million undocumented immigrants living in the United States. As a Pulitzer Prize-winning journalist and filmmaker who founded the nonprofit organization Define American, Vargas has acquired the sobriquet "the most famous illegal."

As a youngster, growing up in Mountain View, California, he was encouraged by a high school teacher to go into journalism because he "asked so many questions" in her classroom. Working to excel in that field, he lived a life in which he was forced to lie in order to pass as American, all while making friends, earning internships, and developing English speaking and writing skills to advance his journalism career.

Eventually, Vargas was hired by the New York Times. In 2008, he was part of a team of writers who reported on the shooting massacre at Virginia Tech and won a Pulitzer. That win was the spark that made him decide to drop all pretense and to declare himself undocumented. He revealed his status in an article for the newspaper, which received wide notice. Then he wrote this book.

Vargas' eloquent and emotional narrative in Dear America makes the larger immigrant story personal and relevant. It is a tale of courage, persistence, and candor. It reveals the author's confusion and frustration for the plight of others who live an invisible existence, while longing to contribute to a country that provides no legal access to citizenship.

Among them are the immigrants who came to America after the amnesty of 1986 and those granted relief from deportation under Deferred Action for Childhood Arrivals (DACA), which gives young undocumented immigrants protection from deportation, and a work permit. The program expires after two years, subject to renewal.

Vargas' cogent explanation of what is “legal” boils down to something he said to a woman at an airport, after she recognized and spurned him: “People cannot be illegal."

Elegantly persuasive, Vargas calls for a new language around immigration and the meaning of citizenship. He speaks as one man for many. Characterizing immigration as the "inalienable instinct of human beings to move," he notes that the United States, after all, was founded on that very freedom. He suggests that a careful reading of the Declaration of Independence listing grievances against Britain's King George III reveals that very fact.

Quotes Vargas, the king "endeavored to prevent the population of these States; for that purpose, obstructing the Laws of Naturalization of Foreigners; refusing to pass others to encourage their migration hither."

In this context, the Declaration provides a memorable 18th-century footnote from a founding incident in our history, illuminating the thorny issue of immigration in our time.