The Bookseller of Florence: The Story of the Manuscripts That Illuminated the Renaissance

The fascinating account of a 15th-century bibliophile who revered hand-lettered tomes. 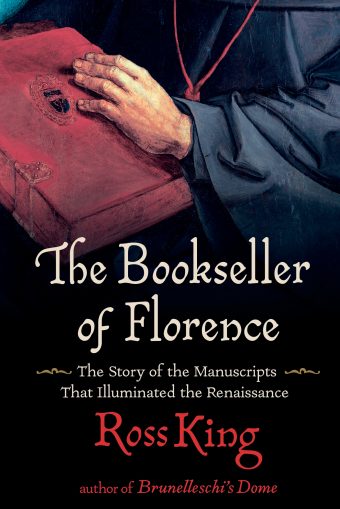 The bookseller of the title of this fine work is Vespasiano da Bisticci, a once-prominent purveyor and producer of handwritten, handbound volumes who held forth in his shop on the Via dei Librai (the Street of Booksellers) in 15th-century Florence.

But though he is the central character, Vespasiano is also the vehicle through which New York Times-bestselling author Ross King writes about the centuries-long evolution of bookmaking, from the use of papyrus and parchment in ancient times, through the Middle Ages and Renaissance Italy, into the industrial age of the printing press.

Bibliophiles will enjoy many of the stories King tells, which are often as much about the content of the books as those books’ actual form. For instance, he explores the long-running debates between Plato the teacher and Plutarch his student over the former’s classic, The Republic. The arguments found their way into 15th-century Florence as Italian intellectuals published their own interpretations of the ancient Greek work, more grist for Vespasiano the bookseller.

The book brims with historical context, including papal and political rivalries, the fall of Constantinople to the Ottoman Turks, and the emergence of the new technology in Germany that would up-end the entire industry of bookmaking, displacing countless scribes, parchment makers, and others — much as the internet has transformed publishing and displaced workers today.

In search of volumes to enrich the libraries of wealthy customers, Vespasiano’s agents fanned out across Europe, traveling from abbey to abbey to find bound treasures that would satisfy their clients’ intellectual and acquisitive needs and desires. If we, today, think of bound books as perhaps marginal in the age of e-books and print-on-demand, they were then sought-after rarities, especially before Gutenberg’s movable type made them cheaper to produce and more widely available.

Bookmaking was once more art than technology. Manuscripts — the word derives from two Latin words meaning “by hand” and “written” — required great manual dexterity to precisely replicate the copied text. In other words, penmanship is, indeed, a fine art that “keyboarding” has long since replaced. Pity the poor scribes who created 2.7 million manuscripts in the 1300s alone. One wonders if they suffered from carpal tunnel syndrome before that term entered our lexicon.

Books were so valued in ancient Greece, King writes, that Alexander the Great kept his copy of The Iliad under his pillow — next to his dagger. The Bookseller of Florence is full of such interesting asides. Who would guess, for example, that the Black Death, whose human toll was some 50 million, would be a boon for papermakers? Think of all the old clothes of the deceased, rags that could be recycled into paper — washed, dried, stretched, cleaned, and then cut into pages.

Dead livestock would also provide the raw animal skins needed for parchment. We learn from these pages that a single Bible required the skins of more than 200 animals. And if the hides were not sufficiently scraped, a medieval scribe would complain, “The parchment is hairy.”

Good to know, too, that the annual Frankfurt Book Fair — the world’s largest trade fair for books, drawing booksellers and publishers to the German city and causing a weeklong hiatus in the actual business of bookmaking each October — dates all the way back to 1462. It’s more than merely marketing at work, as King tells us. It’s also history.

Throughout, King writes, wars and plagues interfered with the sale and marketing of books, both printed and handmade. Then came the new technology. In the 1470s, Vespasiano’s scribes and illustrators worked on a Bible for a library in Urbino, but printing presses were beginning to make their mark. The Legend of Saint Catherine first appeared in print on March 24, 1477, from the Ripoli Press of two friars in Florence; more than 20 copies survive. Though the quality may have been imperfect, the writing, as they say, was on the wall.

As for Vespasiano, the bookseller: In 1480, at the age of 58, he reported on tax returns that he was “no longer in business.” By then, King notes, Florence already had two established printing presses. The bookseller would not yield, glorifying “the pen-made book” and refusing even to stock and sell those produced by presses. His time had passed.

His shop is now a pizza parlor, and Vespasiano today is little known or celebrated — until now. Thanks to King, the tale of Vespasiano’s 40-year career at a crucial turning point in the business and production of books is finally a book of its own.

Technology aside, his most important legacy may be found in his own words, which King quotes: “All evil is born from ignorance. Yet writers have illuminated the world, chasing away the darkness.” Regardless of the platform on which words are composed and disseminated — by hand, in print, or online — that seems a fitting epitaph for the bookseller, one that is both timely and timeless.