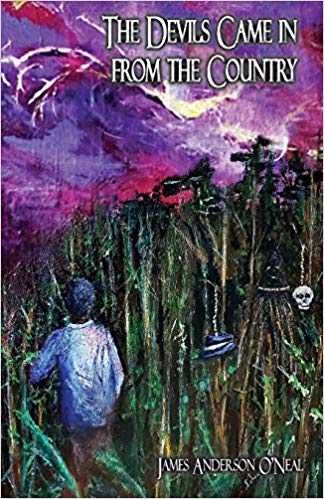 The real protagonist of The Devils Came in from the Country, set in Liberia mostly between 2007-2016, is the nation itself. The West African country was founded in 1822 as a colony of the U.S., when some 5,000 freed slaves settled there. In 1847, it declared its independence from the United States.

More than a century later, in 1989, its government was overthrown in a coup. The country was then governed by a military dictatorship until the 1990s and suffered two lengthy and extremely destructive civil wars that ended in 2003.

The wars left the country in ruins. Infrastructure was all but destroyed, utilities were nonexistent, and poverty and corruption were a way of life.

Into this chaos comes Joseph Munro, the child of a well-to-do Liberian father and one of his several wives. When his family is murdered during the invasion by Charles Taylor in the early 1990s, Joseph escapes to America, where he stays until 2007. Then, as a young man working for the Baxter Center, a philanthropic organization focused on improving conditions in Liberia, he returns home.

Joseph is damaged. As a consequence of childhood trauma, he suffers from obsessive-compulsive disorder and post-traumatic stress injury. He has screaming dreams, washes his hands repeatedly, and can’t resist pinching the skin on the back of his left hand. His reason for traveling back to Liberia is to help the people of his homeland.

Through Joseph’s eyes primarily, the reader sees the privation of the place. He discovers the breadth of corruption upon his arrival at the airport near Monrovia, when a policeman offers to help him for 20 dollars. Only the wealthy have electricity — from generators they buy and run themselves — and running water. Destroyed buildings are omnipresent, the streets are rubble, and the populace lives at the starvation level.

The conflict for Joseph arises when, half a dozen years after his return, gold is discovered near his home village. The Baxter Center has the power to intervene to assure the gold mine will benefit the people rather than the corrupt politicians and businessowners. Meanwhile, the Russians and Chinese are angling for control of the operation.

Joseph’s position is compromised when a powermonger offers him untold privilege; in return, he’ll have to ensure the Baxter Center retains control of the mine.

But all the plots and subplots of the story cease to be important in 2014, with the outbreak of Ebola, a disease so hideous and contagious that all else is swept away. Over 11,000 people in Liberia and neighboring countries die grisly deaths over the next two years, spewing blood from their bodies. Almost everyone Joseph knows perishes.

Joseph’s story is a portal through which to see modern Liberia. The reader learns of “poro,” a secret society for men. Bush spirits, which can be friendly or hostile, dominate life. The “bullroarer” calls people to “palava,” a compulsory town meeting.

We meet a series of bizarre characters ranging from Skitterman, a fallen-away Catholic priest who now lives in the wild and devotes himself to helping others, to Tobias Qwee, a town blacksmith who is also the “bush devil” who oversees “trials by ordeal,” in which conflicts are resolved by drinking poison. Whoever survives is declared the righteous winner.

We hear standard American English and Liberian English, the latter of which is a dialect that disregards basic rules of grammar. This is a civilization dominated by fantasy about the spiritual world, surviving on the edge of ruin.

Author James Anderson O’Neal is not a professional writer. He is chair of the Advocates’ board of directors and spent years in Liberia as a project leader and promoter of human rights. The result is writing that varies between acceptable and, occasionally, amateurish. O’Neal writes from a God’s eye point of view, jumping from the mind of one character to the thoughts of another with no warning. Ungainly sentences are frequent.

And, yet, The Devils Came in from the Country keeps the reader engaged. The “devils” of the title at first seem to be the spirits that dominate the people’s thinking. Then the marauders who killed so many appear to take the role. In the final chapters, Ebola seems to be the culprit.

Only at the end of the book is it clear that all these forces, and many others besides, are together the devils who make life in Liberia all but unlivable.

Tom Glenn, who speaks seven languages, is the author of 17 short stories and four novels. Another novel and a new book of short stories are due out next year, and two more books are in preparation. Most of his fiction is about Vietnam, where he spent 13 years on and off as a clandestine intelligence operative.