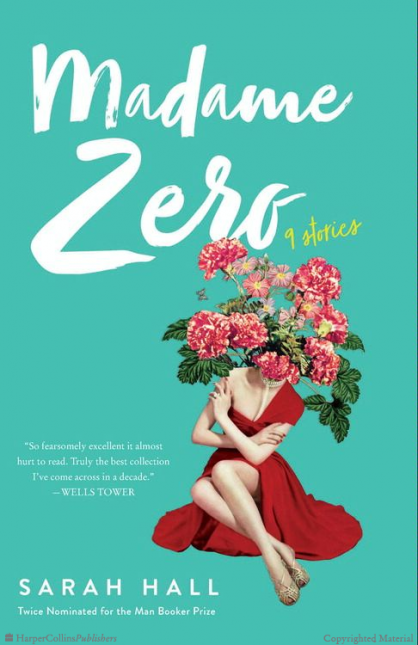 One of the many striking things about the stories in Sarah Hall’s most recent collection, Madame Zero, is the way landscape is such a presence in them, another character as complex and ambiguous as any of the human ones.

In the opening story, “Mrs. Fox," the wife on whom the narrative centers “dreams subterranean dreams, of forests, dark corridors and burrows, roots and earth,” only to later undergo a metamorphosis that will bring her into a far closer relationship with these very things.

Then there is the child subject of “Case Study 2” who cannot fully separate himself from the mountain where he was raised, which is as much a part of him as his own body.

Even in those stories where the place is an artificial one, the transformative power of setting endures. In “Luxury Hour,” the local public pool where the protagonist, a new mother, goes for her once-a-week swim turns out to be the medium through which another version of herself once emerged, one that was more daring, sensuous, and unconstrained.

All of Hall’s settings are marked by human presence; indeed, human intervention in the environment is very often an element in the narrative, whether it seeks to preserve or alter. She is interested in intersections, spaces where the natural and the manmade push against and shape each other.

In “Wilderness,” the central characters pass by new houses encroaching on the coast near Cape Town: “The hills unwound, green and bluegreen. There were enormous rock-buttresses, crescents of sand…New houses were being built along the shorefront, huge modern boxes geometrizing upwards.”

These homes are violating the planning laws and endangering the natural ecology of the shoreline. But this is not a story of passive, victimized nature ruined by careless humans. The main challenge for the characters in “Wilderness” is crossing an aging, creaking viaduct, Kaaimans, which has been so eroded by sand and salt that it may no longer be safe to traverse. The ocean may yet have the last laugh.

In these stories, the natural world pushes back with energies of its own.

This meeting of human design and natural force is a theme of longstanding interest to Hall, whose first novel, Haweswater, explored the flooding of a northern English valley to provide drinking water for cities to the south and the displacement of the valley’s residents.

Hall is from Cumbria, and one can imagine that a place like that, beautiful and remote and inhabited continuously for a thousand years, might suggest such concerns to a writer. But this perspective also feels urgent to our present moment, when even regions where weather and ecology have been mercifully stable until now, like England, are changing through our interference in ways we can see unfold before our eyes.

Hall’s language is at all times remarkable, moving between evocative lyricism and cool precision as the stories demand. The collection mixes the fantastic, the speculative, and the realistic, and, in general, this works well. But the author’s forays into science fiction are not as successful as her work in other modes.

“Theatre 6” depicts a future Britain in which religiously motivated rules to protect “the unborn” imperil women’s lives, a situation that seems not nearly as likely in the UK as it does in the U.S.

“Later His Ghost” is a day-in-the-life tale of a teenage boy surviving after an environmental collapse caused not by heat but by wind. While this is a compelling reminder of the unpredictability of climate change, this story also doesn't quite manage to follow its own implications through to create a fully realized fictional world.

Hall is at her best when delving into intense psychological states and powerful emotions. The attack of vertigo experienced by a young woman goaded into hiking across a quaking, cracking viaduct somehow manages to crystallize with a single stroke not just the cracks in the woman’s relationship with her boyfriend or the dubious nature of her choice to leave England, but also the alarming inscrutability of contemporary South Africa for an outsider who cannot tell what is dangerous and what is only made to seem that way.

In the final story of the collection, “Evie,” the protagonist is carried away by what seems to be a late awakening of desire between himself and his wife, only to learn too late that this change may not be what it initially seems. With her brilliant depictions of the strange places of the human mind, Hall has crafted an illuminating collection that will haunt readers for a long time.